Blastulation: Definition, Types and Process of Bastulation in egg

The repeated process of cleavage results in a heap of cohering, sticky blastomeres which are loosely arranged and consist of narrow crevices in between them. This stage of development is called morula because of its superficial resemblance to a mulberry (morula is the Latin word for mulberry). In the megalecithal ova, such a ball of cells is not formed, instead a planoconvex disc-like mass of blastomeres is formed (as in fishes, reptiles and birds) which may be called a morula.

The types vary in great deal among different animals depending upon a variety of factors such as the size of the egg, the amount and distribution pattern of yolk, the rate and number of cleavage division.

1. Coeloblastula: The blastula of echinoderms and Amphioxus is called coeloblastula. It is in the form of hollow sphere. The blastocoele is filled with mucopolysaccharides and the blastoderm is formed of a single layer of cells.

2. Stereoblastula: In many spirally cleaving eggs of annelids, molluscs, nemertans and some of the planarians, no blastocoelic cavity appears in the blastula. In them the smaller micromeres accumulate as a cluster of cells over the larger vegetally placed macromeres. At the end of cleavage, this results in a solid blastula known as a stereoblastula.

3. Periblastula or superficial blastula: The superficially cleaving eggs of insects produce a periblastula without a blastocoele cavity as nuclei collect in the peripheral layer. In a sense, a cavity is present but filled with yolk from the beginning of cleavage.

4. Discoblastula: It is found in reptiles, birds and fishes which have large yolky eggs. It is called discoblastula because it appears at the animal pole as a small multilayered flat disc separated from the yolk by a narrow segmentation or subgerminal cavity.

6. Blastocyst: Such blastula found in mammals. Cleavage is regular and a small cavity appears inside the dividing cells. The cavity is called blastocoele and becomes progressively larger. The cluster of cells differentiates into two distinct groups, an epithelium like layer of trophoblast cells or nutritive cells, surrounding the expanding cavity and an inner cell mass of formative cells of embryo which are displaced to one pole of the sphere. Though mammalian egg has no yolk, they form a discoidal blastula. The inner cell mass spreads inside the cavity as a flat disc, resembling the chick blastoderm. This stage of mammalian development is known as the blastocyst, and it is at this stage that the embryo implants into the uterine wall. Trophoblast layer surrounding the blastocyst cavity, the blastocoele, is not part of the embryo proper but eventually becomes part of the placenta or extraembryonic membranes as the embryo implants.

The centrolecithal egg has superficial cleavage. Here any cavity comparable to blastocoel does not form. However, the formation of the epithelium on the surface of the egg, after the nuclei have migrated to the exterior can be compared to the formation of the blastula. The layer of the cells thus formed on the surface of the embryo is the blastoderm. Instead of surrounding the cavity, the blastoderm envelopes the mass of uncleaved yolk. The blastoderm thus formed is known as superficial blastula or periblastula, e.g., insects.

In microlecithal egg with holoblastic cleavage, the blastomeres at the end of the cleavage are not of exactly equal size due to slight yolk inhibition of vegetal cells. These cells arrange themselves into a simple columnar epithelium enclosing the centrally located blastocoel. Since the vegetal cells are larger than the animal cells, the blastoderm is not of equal thickness throughout. At the vegetal pole, the epithelium is thicker and at the animal pole it is thinner. Thus, the polarity of the egg persists in the polarity of the blastula. This blastula is called as coeloblastula, e.g.. Amphioxus.

The amount of accumulated yolk in the vegetal hemisphere has resulted in inhibition of cleavage and displacement of all the horizontal cleavage divisions towards the animal pole. The combined result of these developmental modifications is the formation of a blastula with an eccentric blastocoel. The blastocoel is dorsally displaced. and the vegetal blastomeres, which are much larger than those of animal hemisphere. contain within them a considerable amount of nutritive yolk. Furthermore. the blastoderm is no longer a simple epithelium but is two or more cells thick. The cells in the interior are rather loosely connected to one another, but at the external surface of the blastula the cells adhere to one another very firmly. because of the presence of a cementing substance joining the surface of adjoining cells. This type of blastula is known as amphiblastula and it occurs in amphibians.

This type of blastulation occurs in birds, reptiles and fishes. 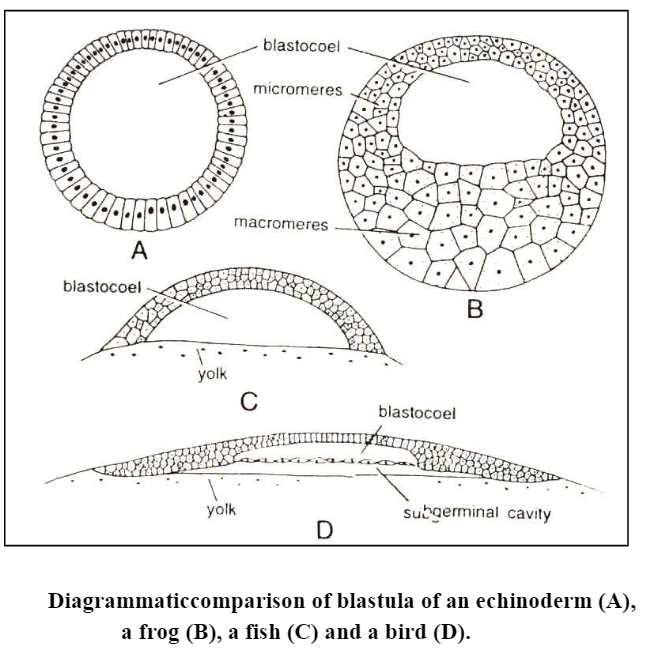 At the end of segmentation, the embryo of polylecithal egg reaches the morula stage, which consists of a disc-shaped mass of cells, several strata in thickness called the blastodisc lying applied to the yolk.

In the later stage of cleavage, the blastomeres of the central area of the blastodisc become separated from the underlying yolk and enclosed between itself and the uncleaved residue of the egg is a fluid-filled cavity, the subgerminal cavity or the segmentation cavity. 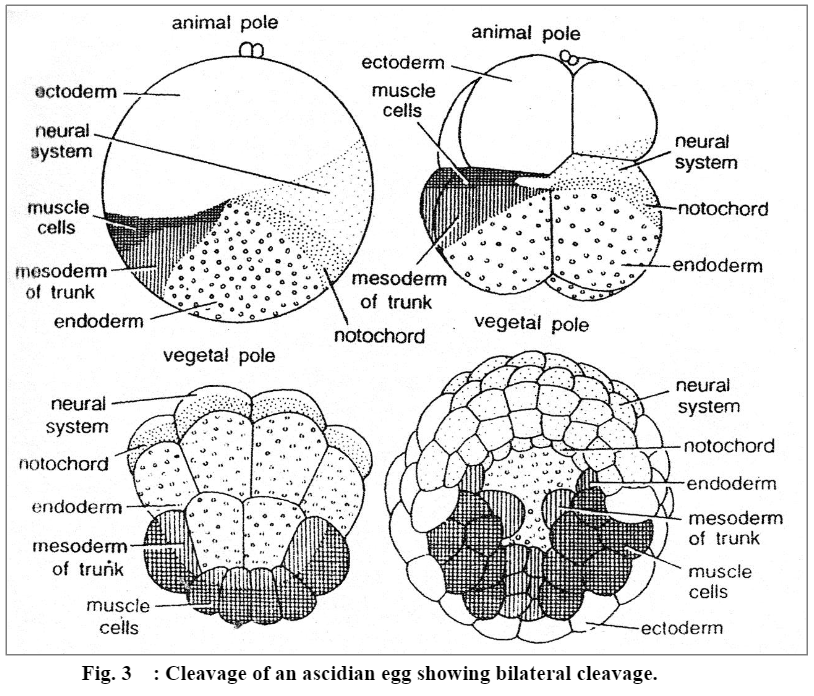 The blastomeres of the central area are further divided by many vertical and horizontal cleavage furrows, so that the blastodisc has four to five cells thick central region. The peripheral cells and the syncytial layer lying underneath the subgerminal cavity remain adhered to the yolk and is called periblast. The peripheral area of the discoblastula is opaque because the larger yolk laden blastomeres rest directly on the underlying yolk. This outer zone is known as the area opaca. The central mass of blastomeres overlying the fluid filled subgerminal cavity are smaller and relatively free from the yolk, appear translucent. They constitute thearea pellucida. 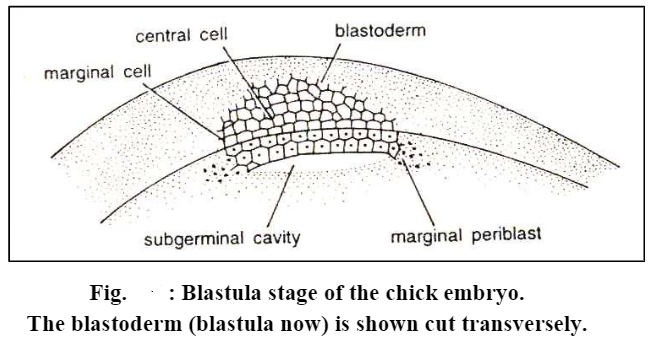 Soon, the larger yolk laden blastomeres of the area pellucida segregate from the blastodise and move inward in the subgerminal space one by one or in loose clusters and form a less organised thin flat epithelial layer called the hypoblast. The small sized blastomeres with poor yolk left behind at the surfaces as a thin superficial layer is known as the epiblast. A narrow horizontal cavity, the blastocoel appears between the epiblast and the hypoblast.

So far, the stages of development of the eggs are identical in fishes, reptiles and birds. stiles and birds. However, at the time when blastoderm is being formed, a very essential difference becomes apparent. In fishes, the loosely connected blastomeres form only a single layered epithelium above the blastocoel, but in most reptiles (except tortoises) especially in lizards and snakes the blastulation is identical to that of bird. The blastocoelic cavity corresponds to the blastocoel of amphibians and the space between the hypoblast and yolk may then be distinguished as the sub germinal cavity.

Thus, up to blastula stage, embryo preserves almost the same general shape as the uncleaved egg. In pigmented eggs, the pigment remains as before, more or less restricted to the upper hemisphere of the egg. During cleavage no qualitative changes can be discovered in the chemical composition of the developing embryo. No new substances, either chemically defined or microscopically detectable have been found to appear during cleavage. However, the substances present during cleavage are essentially important for further development.

With the disappearance of yolk, mammalian eggs have reverted to holoblastic cleavage. But their subsequent development bears ample evidence of the former presence of yolk.

Although the cleavage is complete, it is not as regular as in lower chordates. The blastomeres are of different sizes from the start and the numbers of blastomeres do not increase by a regular doubling sequence but tend to show arithmetical progression. Here the speed of cleavage is in slower than the other animals. At about 72 to 96 hours after fertilization the ovum reaches 16 celled stage. At this stage the 16 blastomeres are arranged in the shape of a ball called morula. It is still surrounded by the zonapellucida, while the cells divide the morula travels towards the uterus, probably because of the peristaltic mover of the fallopian tube.

Sooner or later a cavity appears inside the compact mass of cells of the morula. The cavity is formed of crevices, which appear between the inner cell mass and the cells of the trophoblast. This cavity is called the blastocyst cavity and is filled with a fluid. The cavity enlarges and the whole embryo becomes inflated. The trophoblast becomes lifted off the inner cell mass on most of its inner surface; but it remains attached on one side only which forms the embryonic pole and later on becomes the dorsal side of the embryo. The fully developed blastula of rabbit is disc shaped, so is called discoblastula.