The plumule develops to form the stem. Thus stem is an aerial part of the plant. It consists of axis and the leaves.

Stem has got the following characteristics:

1. It is ascending axis of the plant and phototropic in nature.
2. It consists of nodes, internodes and buds.
3. It gives rise to branches, leaves and flowers.
4. Stems may be aerial, sub-aerial and underground.

Depending upon the presence of mechanical tissues, the stems may be weak, herbaceous or woody.

1. Weak stems: When the stems are thin and long, they are unable to stand erect, and hence may be one of the following types:
(a) Creepers or Prostate stem: When they grow flat on the ground with or without roots. Examples are grasses, gokharu etc.

(b) Climbers: These are too weak to stand alone. They climb on the support with the help of tendrils, hooks, prickles or roots. For examples vitis, piper betel, piper longum.

(c) Twinners: These coil the support and grow further. They are thin and wiry i.e. lpomoea and phaseolus.

2. Herbaceous and woody stems: These are the normal stems and may be soft or hard and woody i.e. sunflower, sugarcane, Mango etc.

1. Produce leaves and exposes them properly to sunlight for carrying out photosynthesis.

2. Conducts water and minerals from roots to leaves and buds.

3. Foods produced by leaves are transported to non-green parts of the plant.

4. Produce flowers and fruits for pollination and seal dispersal.

5. Depending upon the environment it gets suitably modified to perform special functions like storage of foods, means of propagation etc.

(i) Underground modifications of stems:

Underground modifications of stems are of the following types:

1. Rhizomes: Grow horizontal under the soil. They are thick and are characterised by the presence of nodes, inter-nodes and scale leaves. They also possess bud in the axil of the scale leaves. Examples are: Ginger, turmeric, rhubarb, male-fern etc.

2. Tubers: Tubers are characterised by the presence of ‘eyes’ from the vegetative buds which grow further and develop into a new plant. Tubers are the swollen underground structure of the plant. The examples of tubers are Potato, Jalap, Aconite etc. 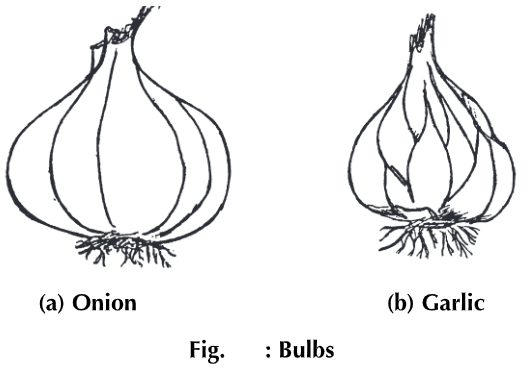 3. Bulb: In this case, the food material is stored in fleshy scales which overlap the stem. They are present in the axils of the scales and few of them develop into new plant in the spring season at the expense of stored food material in the bulb. Adventitious roots are present at the base of the bulb. The reserve food material formed by the leaves is stored at their bases and the new bulbs are produced next year. Examples are Garlic, Squill, Onion and Gloriosa.

4. Corm: Corms are generally, stout, and grow in vertical direction. They bear bud in the axil of the scaly leaves and these buds then develop further to form the new plant. Adventitious roots are present at the base of the corm. Examples of the corm are Saffron, Colchicum, Dioscorea. 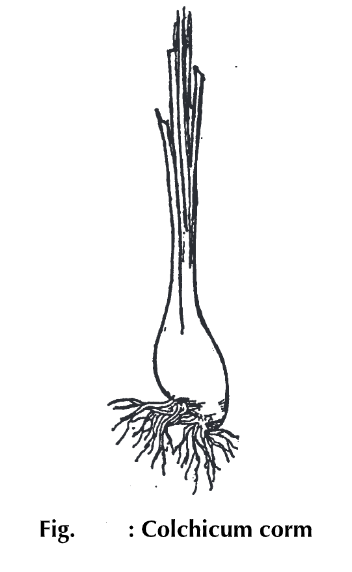 1. Runner: These creep on the ground and root at the nodes. Axillary buds are present Strawberry, Pennywort are examples.

2. Stolon: These are lateral branches arising from the base of the stems which grow horizontally. They are characterised by the presence of nodes and inter-nodes. Few branches growing above the ground develop into a new plant. examples are Glycyrrhiza, Arro-root, Jasmine.

3. Offsets: These originate from the axil of the leaf as short thick horizontal branches and also characterised by the presence of rosette type leaves and a cluster of roots at their bottom. Examples are Aloe, Valerian.

4. Sucker: These are lateral branches developed from underground stems. Suckers grow obliquely upwards, give rise to a shoot which develop further into a new plant. Examples are Mentha species, Chrysanthemum, Pineapple, Banana etc. 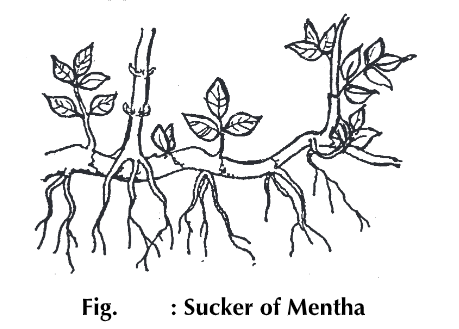 As the name indicates they grow into the air above the soil to a certain height. They are as under:

(a) Phylloclades: At times, the stem becomes green and performs the function of leaves. Normally this is found in the plants growing in the desert (xerophytes). Phylloclades are characterized by the presence of small leaves or pointed spines. Examples are Opuntia, Ruscus, Euphorbia. Cladode is a type of phylloclade with one internode, i.e. Asparagus. 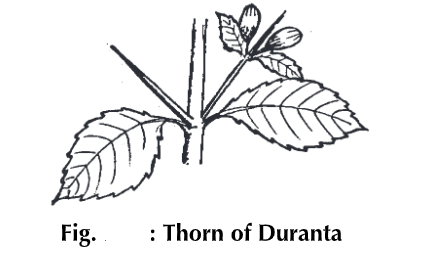 (b) Thorns and prickles: This is another type of aerial modification meant for protection. Thorns are hard, pointed, straight structures, such as Duranta, Lemon. Prickles and thorns are identical in function. Prickles get originated from outer tissues of the stem. Thus they are superficial outgrowths. Prickles are sharp, pointed, and curved structures. They are scattered all over the stem. Rose, Smilax can be quoted as examples of the same. 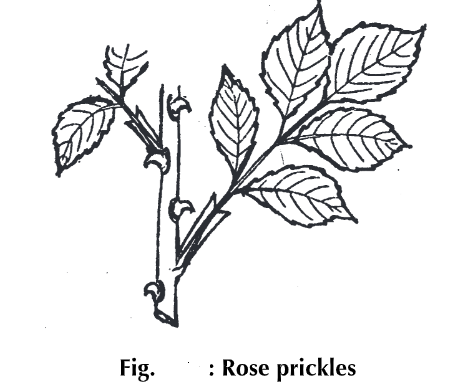 (c) Stem-tendrils: In certain plants, the buds develop into tendrils for the purpose of support. Terminal bud in case of vitis, axillary bud in case of passiflora are suitable examples.

(d) Bulbils: These are modifications of floral buds meant for vegetative propagation. Such as Dioscorea and Agave. 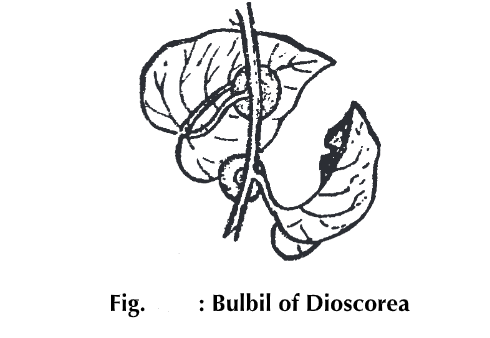 Depending upon the structural and chemical contents, stems are used for various purposes.

1. Underground stems in their various forms are either used as food spices or for culinary purposes like, Potato, amorphophallus, colocasia, garlic, ginger, and onion.

2. Jowar, rice and other stems are used as fodder.

3. Stems of jute, Hemp and Lax as sources of industrial fibres used for various purposes.

4. Sugar Cane: Stems are used as source of sucrose while latex from stems of Hevea-brazilansis is used as Rubber.

5. Woods from stems of several plants are used as drugs like Quassia, Guaicum, Sandal Wood etc.

6. The stems of several plants are injured to produce gums for their multiple industrial uses like Gum-acacia, Gum-tragacanth, Gum-sturculia etc.

7. Following are the few stems commercially used as drugs either directly or after making incisions.