In the secondary lymphoid organs, T and B cells undergo further mitosis in response to antigen. A wide range of receptors is available on different virgin lymphocytes. The antigen ‘selects’ a receptor with a shape complementary to the antigen shape and stimulates that cell to divide to form a clone of daughter cells (clonal selection). Normally such division is only initiated with the aid of signaling molecules, and a complex network of signaling conversations and interactions exists between the different arms of the immune response: those interested should consult more advanced texts. Whether a response is primarily T-cell or B-cell mediated will depend on the nature of the antigen and its mode of presentation.

In humoral immunity most antigens are first processed by a type of macrophage (antigen-presenting cell, APC) which presents the antigen to the relevant B cell along with a signaling, ‘self’ MHC antigen. The B cell responds, normally with the obligatory assistance of a helper T lymphocyte; many divisions of the B cells result in a population of large plasma cells which secrete antibodies (together with a smaller population of small, memory B cells which will be stimulated by further exposure to the antigen and facilitate the speedier secondary immune response).

In cell-mediated immunity, the relevant type and specifically committed T cell is stimulated to divide; effector T cells are produced which secrete cytokines and other signaling molecules, and have cytotoxic function.

Antibodies (a functional term) are immunoglobulin (Ig) proteins (a structural term). Although all Igs are structurally related to each other, the Igs from a given animal are molecularly heterogeneous. However, antibody secreted by a single B cell or by a clone of its descendants will have the same specificity.

The basic Ig molecule has four polypeptide chains: there are two identical heavy chains and two identical light chains. The chains are linked by chemical bonds, ionic and (usually) covalent. The protein has a higher-order structure giving an overall globular shape which, when unraveled, can be described as Y-shaped.

The N-terminal ends of the chains bind antigen: variation in the primary amino acid sequence of the variable regions of the chain (the N-terminal half of the light chains and the N-terminal quarter or fifth of the heavy chains) is reflected in the shape of the molecule. Such variation (encoded in a variety of groups of genes which are selected and whose products are spliced, translocated and translated together) results in an enormous variety of shapes, giving antibody diversity.

The antibody shape, in its antigen-binding cleft, ‘fits’ the shape of the antigen: a ‘lock-and-key’ model. The rest of the antibody molecule is relatively constant in its amino acid sequence, and is responsible for the biological or adjunctive functions of the antibody. The first antibody type to appear in the primary immune response is usually IgM: this is a pentamer of the basic Ig molecule, each of the five subunits having two µ heavy chains and two light chains (of which there are two types, never mixed in one Ig molecule, k or l). The subunits are joined by a J (joining) chain. A few days later, the IgM is supplemented and soon supplanted by IgG which resembles the basic Ig molecule with two µ  and two light (k or l) chains.

Following a second injection of antigen, predominantly IgG is produced: this is the secondary immune response. Memory B cells are stimulated. In secretions (e.g. gut fluids, tears, urino-genital secretions, semen, milk and colostrum), IgA is found. This has two basic four-chain units (each with two α and two k or l chains) joined by a J chain and stabilized by a ‘secretory piece’ inserted by the epithelial cells.

There are two other Ig classes (or isotypes) in humans: IgE (with two å heavy chains and two light chains) associated with type I immediate hypersensitivity, and IgD (with two ä heavy chains and two light chains), an important receptor molecule on lymphocytes, particularly in early development. In fishes, IgM is the only Ig found and is probably the most primitive in evolutionary terms. Multiple Ig classes are found in all land vertebrates: the main Ig of the secondary immune response in amphibians, reptiles and birds is IgY (which may be the evolutionary homolog of mammalian IgA): IgG is restricted to mammals. 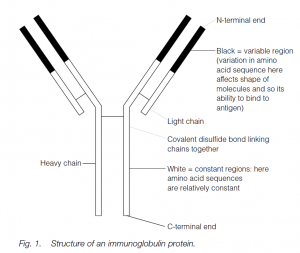 These describe the functions of antibodies other than their binding to antigens. Among them are:

This is a powerful technique enabling large quantities of highly specific antibody of a single molecular species (idiotype) to be made. In one method a mouse is injected with an antigen. After a period of time spleen cells (some of which should be making antibody to the antigen) are harvested – these are resistant to hypoxanthine, HAT. In the presence of polyethylene glycol (PEG), the spleen cells are fused with cancerous myeloma cells. The hybridoma cells divide rapidly – any unfused cells are killed by HAT. The cells are cultured by cell culture techniques and cells that react by producing antibody to the relevant antigen can be identified and subcultured.

An example of cell-mediated immunity is the rejection of a graft of genetically different, nonself tissue (e.g. skin or kidney). In very much simplified terms, T lymphocytes ‘see’ nonself antigens on graft (donor) cells. All cells have transplantation or tissue-type antigens on their surfaces: these are highly specific to individuals and are encoded in the MHC genes. T cells are activated by the nonself antigens and, with the assistance of accessory cells, transform, secrete cytokines and facilitate in various ways the destruction of the graft. The generation of memory T cells during this process results in the speedier rejection by the ‘sensitized’ host of a second (‘second-set’) graft from the same donor although a graft from another donor will be rejected by the host with the same kinetics as the first graft from the first donor. (There will also be antibodies made to graft antigens.)

Grafts will not be rejected if:

The mammalian fetus is technically an allograft because it carries antigens derived from its father. Mother does not reject her fetus – the phenomenon is sometimes called the paradox of the fetal allograft. (Not only does the mother have to tolerate her fetus, the fetus has to tolerate its mother and tolerate itself.) The mechanisms for this tolerance are not fully understood, but postulated reasons include: (a) a mucopolysaccharide physical barrier shielding the surface of the placenta from mother’s immune system, (b) low levels of MHC antigens (or special types of MHC antigens) on the placenta, (c) shielding (enhancing) antibodies from the mother that mask the fetal antigens but cause no further reactions, (d) low-zone tolerance (specific immunological non-reactivity) induced by minute amounts of fetal antigens, and (e) local (intrauterine) immunosuppressive action by placental steroids.

When a virus infects a cell, infected cells produce interferon. This binds to receptors on uninfected cells which then make antiviral proteins that shut down protein synthesis – e.g. for proteins that form the viral coat. Cytotoxic T (Tc) cells recognize antigen fragments associated with Class I MHC products on cells, and move to kill infected cells; in virally infected cells (e.g. adenovirus, HIV) the viruses down-regulate the MHC production by the host cell. Therefore the Tc cell does not recognize infected cells. Natural killer (NK) cells are large, granular lymphocytes.

They have a killer-inhibitory receptor that recognizes MHC Class I molecules on healthy cells, and so are inhibited from killing. In an infected cell with no MHC Class I expression, the receptor is not inhibitor-activated, and so killing of the infected cell is facilitated. Viral fragments may be incorporated into the host cell membrane; antibodies (IgG for blood-infected viruses such as yellow fever, IgA for mucosal-infected viruses such as common cold) react to the fragments and coat infected cells. NK cells with an FcãRIII receptor bind to the C-terminal end of the Ig and potentiate cell killing by a process termed antibody-dependent cellular cytotoxicity. Neurons and stem cells with low levels of expressed MHC Class I molecules are still protected against NK cells, but they are therefore devastated by infections, whereby the immune system destroys infected cells (e.g. encephalitis from Herpes simplex) but the cells cannot be replaced (e.g. in the brain).

Ontogeny of immunity in humans

In the human embryo/fetus, stem cells are seen in primitive blood islands near the liver at about week 5 of gestation. By week 6 they are found in the yolk sac. By ~ week 10 they are found in the fetal liver, and from 16+ weeks in the bone marrow. Precursor B cells are found ~8–9 weeks in the liver; early T cells are found in the thymus at ~9 weeks. By ~12 weeks all immune cell types are found in the fetal circulation. The fetus makes its own IgM antibodies after about 5 months gestation; there is little fetal IgG or IgA present. Most antibody is maternal IgG transferred across the placenta. At birth the immune system is complete, but poorly developed because it has not been called upon to react. However, the later fetus can respond to many intrauterine infections, and fetal immune cells perform well in in vitro tests.

Following birth the immune system copes well with the antigenic insults of the extrauterine environment. The neonate starts to make its own antibodies; maternal IgA in colostrum and milk also helps to protect the neonate from gut infections. Around puberty the thymus involutes. During senescence the immune system’s performance tends to decline (there is a slight falling off in the number of stem cells and B cells, but a marked decline in the number of T cells results in some imbalance in the system). Infections are coped with less well in old age. There is also a tendency for autoimmune conditions to appear: many diseases of old age, such as rheumatoid arthritis, late-onset (Type II) diabetes, etc. have an autoimmune aetiology. This ‘autoimmune decadence’, whereby the body’s immune system attacks the body, could contribute to the overall ageing process.