The term immunity is derived from Latin immunis, meaning free from burden. In biology, the burden is disease caused by a variety of microorganisms (e.g., viruses, bacteria, fungi, protozoa etc.) — and the physiological role of the immune system is to keep them at bay.

Immunity is defined as the state of resistance or insusceptibility exhibited by the host to toxic molecules, microorganisms, and foreign cells.

A) Natural (innate) or

It is also known as native immunity. It is a resistance with which a person or a lower animal is born. It is nonspecific. This type of immunity is present for life.

1. Species immunity – Animals of same species exhibit uniform pattern of susceptibility to infections, e.g., B. anthracis infects human but not chicken, birds are immune to tetanus. The physiological and biochemical differences between tissues of different species may be responsible for species specific immunity.

2. Racial immunity – Algerian race of sheep is immune to anthrax which is a common disease of other races of sheep. Although, there is no definite evidence of racial immunity in human beings, pulmonary tuberculosis in White race is most often self limited whereas American negroes usually develop acute fulminant type of tuberculosis. Such racial differences in human could be due to environmental conditions, social habits and economic status. In a few instances genetic basis of racial immunity has been proved, e.g. persons with hereditary deficiency of glucose-6-phosphate dehydrogenase are markedly less susceptible to P. falciparum malaria.

3. Individual immunity – Certain individuals may be found within a highly susceptible population, who unaccountably cannot be infected by some microorganisms even though they have no previous contact with the same. This type of individual immunity is commonly observed in an endemic outbreak of an infection.

5. Herd immunity – It refers to the collective resistance to the disease displayed by the community in its environmental setting. The ratio of resistant of susceptible persons is important. Certain factors like vaccination, quarantine measures, effect of carriers and environment play important role in herd immunity. When herd immunity is low, there are large numbers of susceptible persons in the community and epidemics occur on introduction of suitable pathogen.

1. Age – The two extremes of life, i.e. fetus and old person carry high susceptibility of infectious diseases. In the former, the immune apparatus is immature whereas in the latter there is gradual waning of their immune response.

Resistance acquired by an individual during life is called acquired or specific immunity. Acquired immunity is of two types: active and passive.

1. Active immunity – Active immunity is the resistance induced in an individual after effective contact with an antigen. It follows either natural infection or vaccination. Here the immune system actively participates in producing antibodies and, often, cell-mediated immunity also. Active immunity develops slowly over a period of days or weeks but persists for a long time, usually for years.

i. Natural active immunity – It is acquired by natural infection by the organisms predominantly by subclinical infections after repeated exposure to small doses of the infecting organism which pass unnoticed. Such immunity is usually long-lasting and plays important role in preventing epidemics, e.g. poliomyelitis, tuberculosis. Some of these follow over infection e.g., smallpox.

ii. Artificial active immunity – It is the resistance produced by vaccination. The vaccines are preparations of live, attenuated or killed microorganisms, or their Ag or active materials (e.g. toxoids). The commonly employed vaccines are –

2) Passive immunity – The resistance that is induced in the recipient by transfer of preformed (readymade form) Ab against infective agent or toxin in another host is called passive immunity. The immune system plays no active role and the protective mechanism comes into force immediately after the transfer of Ab (immune sera). It is short-lived (days: weeks). It is useful when instant immunity is required.

a) Natural passive immunity – It is the resistance passively transferred from the mother to fetus and infant transplacentally and to through milk (colostrums) respectively. 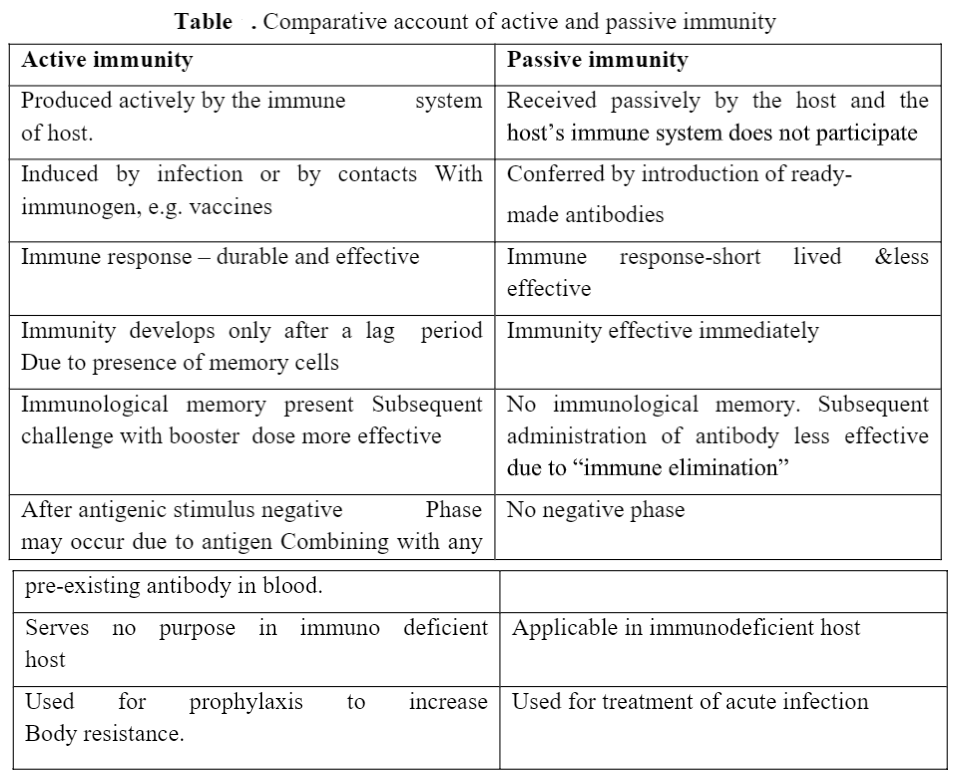