Production of penicillin began in the United States (1941) by surface culture fermentation of Penicillium notatum. During World War II, penicillin producing fungi were studied extensively to increase yields of penicillin. Now a day, penicillin is produced from Penicillium chrysogenum by submerged culture techniques. Morphology of Penicillum species is shown in Fig. 5.1. Penicillin is effective against Gram-positive bacteria and also some large viruses and Rickettsia. Penicillin is a generic term applied to an entire group of antibiotics. 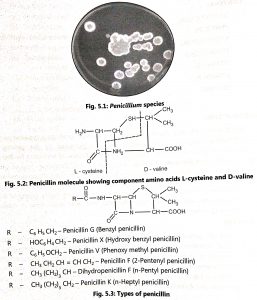 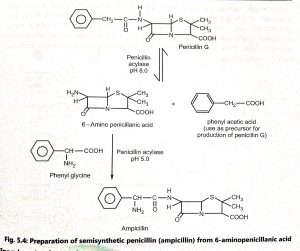 The selected strain of Penicillium chrysogenum is maintained in the form of a master culture and preserved by lyophilization, or by fixing the spores in sterilized soils and mixtures. For inoculum preparation, spores from working solid cultures are suspended in water. These spores are added in flasks containing nutrient solution and incubated for 4 to 6 days at 25°C. The resulting spores are used directly to inoculate inoculum tank. The inoculum tanks are incubated for 48 hours with agitation and aeration to grow more mycelium. The resulting inoculum is used for a production tank or it is added to a second or even third-stage inoculum tank to produce more inoculum for large-scale fementation.

The exact composition of penicillin production media used in the industry for production of penicillin is unknown. These media are considered to be trade secrets of that particular fermentation industry. A typical medium described by Jackson (1958) contains fermentable carbohydrates, such as corn steep liquor solids (3.5%), lactose (3.5%) and glucose (1%) potassium dihydrogen phosphate (0.4 %), calcium carbonate (1%), edible oil (04%), and penicillin precursor. The pH of this medium after sterilization is 5.5 to 6.0. Inoculum media are similar to production media except that lactose and precursors are not added in the inoculum media. These media compositions may be slightly changed to increase yields and meet economic changes. 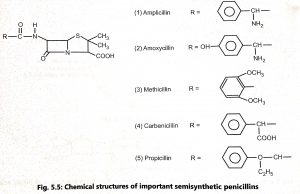 The media are placed in a fermentation vessel, sterilized and inoculated with a suspension of Penicillium chrysogenum (inoculum). A flow sheet for large scale production of penicillin is shown in Fig. 5.6. The fermentation vessel is equipped with devices which allow continuous addition of nutrients, acids/bases to maintain the pH (7 to 7.4) and cooling coils to maintain the temperature (24°C).

The mycelium grows rapidly by utilizing organic nitrogen compounds and lactic acid as a source of carbon. Ammonia is liberated by deamination of the amino acids of the corn steep liquor and pH rises. Ammonia is actively assimilated and maintains the pH. Active penicillin production is associated with this phase of lactose and ammonia utilization (Fig. 5.7).Maximum antibiotics are produced within 4 to 5 days. 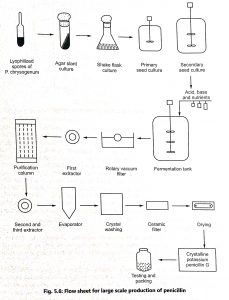 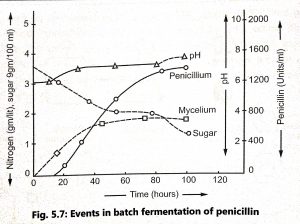 A schematic flow diagram for the recovery of potassium penicillin G (down stream process) is incorporated in Fig. 5.6. The first step in the recovery process is the removal of mycelium or cells by filtration (rotary vacuum filter) or centrifugation. These stages are carried out under aseptic conditions, to avoid contamination of the filtrate with penicillinase producing microorganisms (Bacillus species) which may cause loss of antibiotics. Penicillin is extracted under controlled conditions of temperature, pH and sterility to minimize chemical and enzymatic degradation. It is extracted in the form of acid into amyl acetate, methyl isobutyl ketone or butyl acetate in a counter-current solvent extractor at pH 2.5 to 3.0.