The granulocytes have granular cytoplasm and an irregularly shaped, labeled nucleus. Granulocytes can be distinguished from one another by the shape of their cell nuclei and by their staining reactions with specific dyes. Granulocytes include three types of cells —

a). Neutrophils, b). Eosinophils and c). Basophils.

Basophils appear blue in color when stained by using the basic dye e.g. methylene blue. The nucleus is bi- or tri-lobed, but it is hard to see because of the number of coarse granules that hide it. They are characterized by their large blue granules. 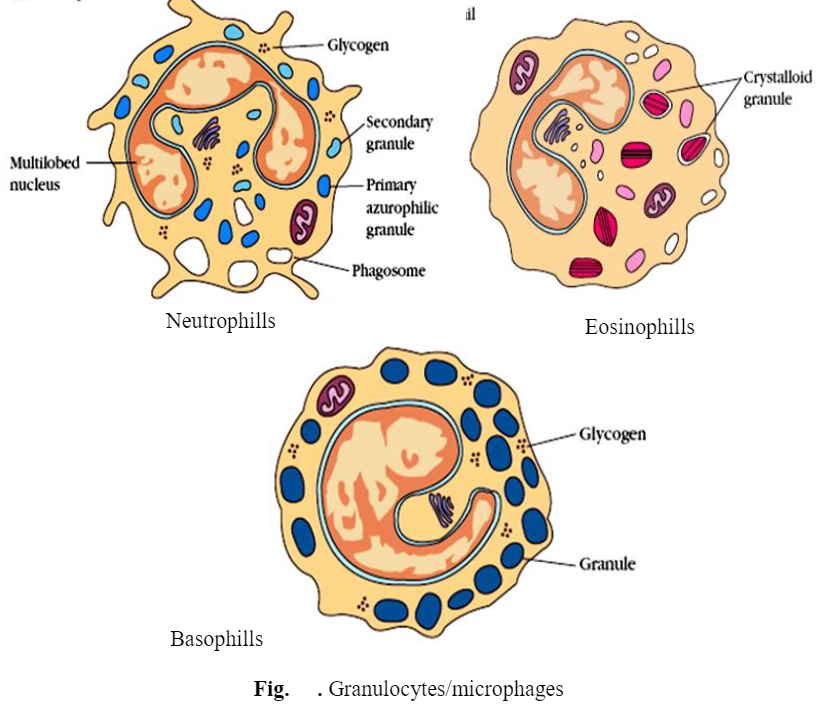 i) Phagocytosis – Microphages are the phagocytic cells responsible for the phagocytosis of certain parasites through the production of toxic proteins.

ii) Allergic reaction – During certain allergic conditions and parasitic infections, the numbers of eosinophils can increase dramatically. They can engulf and remove immune complexes and can inactivate certain allergic mediators.

iii) Damage to the antigen – When the parasite enters the body, eosinophils are activated through the complement system resulting in the release of major basic proteins and eosinophilic cationic protein which damages the outer layer of parasites.

v) Detoxification – Eeosinophils may also detoxify foreign substances and help turn off inflammatory reactions. Eosinophils are phagocytic and have the ability to leave the blood.

Agranulocytes are cells that lack the granular cytoplasm and have round nuclei. They include the following types of cells.

i) Phagocytosis – The primary function of macrophages is to phagocytize the Ag. When Ag succeeds in penetrating the skin or mucous membrane, local macrophages accumulate around the invaders and the Ag is phagocytized inside a vacuole called a phagosome. The membrane of the phagosome and lysosome fuses to form a phagolysosome. Lysosomal enzymes like acid proteases, RNAase, DNAase, phosphatase, and lipase digest the particle. However, some microbes like S. typhi, M tuberculosis, and Brucella abortus can resist digestion by macrophage. Monocytes functions as “vacuum cleaner”, and are much longer lived

iii) T cell activation – Macrophage secretes a number of biologically active substances such as interleukine 1 and leukocytes activating factor (LAF) which induces the synthesis of interleukin 2 by T cells. interleukine 2 facilitates the activation of T cells for cell-mediated immune response.

vi) Prevention of infection – The vital role of macrophages is to prevent the infection. Deficiency of phagocytosis causes granulomatous disease, in which the patient succumbs to recurrent bacterial infection even though the T and B cell functions remain normal.

It Contains (20-40% of total leucocytes), It is a mononuclear leukocyte that mediates humoral or cell-mediated immunity. A lymphocyte is a white blood cell involved in specific immune responses. Lymphocytes are derived from lymphoid stem cells located in the bone marrow. Lymphocytes are the central cells of the immune system they are the immunological attributes of diversity and specificity of memory of self and non-self recognition. The lymphocytes constitute 20-40% of the body’s WBCs and 99% of the cells in the lymph. These lymphocytes continually circulate in the blood and lymph and they are capable of migrating into tissue spaces and in the lymphoid organs. Lymphocytes are not phagocytic but play a key role in specific immunity.

T-lymphocytes originate from stem cells in adult bone marrow or the fetal liver and these cells pass through the thymus and emerge as mature T-cells. T-cells are small, spherical cells with a uniformly dark blue, rounded nucleus surrounded by a thin fringe of clear pale blue cytoplasm. T-cell is one of the major types of lymphocyte T-cell develops from a stem cell processed in the thymus gland and this is responsible for the cell-mediated.

ii). TS (Suppressor T cells) – Suppressor T (Ts) cells are generally thought to be T cells that regulate the immune response by turning it off when an antigen is no longer present. Ts cells are also important in the maintenance of self-tolerance, preventing self-directed T cells that avoid clonal detection in the thymus from mounting immune responses. Some immunologists consider it likely that Ts are not a distinct population but present suppressive activity by the TH and Tc cell populations; however, Ts cells usually carry CD8 receptors, whereas most TH cells carry CD4 receptors.

T suppresser cells regulate immune response and help to maintain immunological tolerance. TS cells are also important in the maintenance of self-tolerance preventing self-directed T cells which avoids clonal deletion in the thymus from mounting immune response. Some immunologists consider it likely that Ts cells are not a distinct population but represent suppressive activity by the TH and Tc cell populations. However, Ts cells usually curry CD8 receptors and most TH cells carry (DH receptors).

i) Tc cells – Activated cytotoxic T (Tc) cells destroy target cells upon contact with Ag. Protection against viral infections and intracellular bacterial infections is the most important function of Tc cells. Because viruses (and some bacteria) reproduce within host cells, they cannot be attacked there by the action of antibodies. Tc cells recognize viral antigens on the surface of the virus-producing host cell and cause the destruction of that cell. Tc cells also play at least some role in the defense against a few diseases caused by protozoa and helminths.

Tc cells may also kill cancer cells and cells of transplanted tissue. After it contacts and kills a target cell, the Tc cell continues to live and can kill repeatedly activated cytotoxic T cells destroy target cells on contact.

ii) TD –TD cells are the cells for which cell-mediated immunity was originally named for the transfer of these cells between animals was found to transfer immunity to tuberculosis. TD cells are probably not a separate population but mostly TH cells and few Tc cells involved in this type of immune function.