The important factors that influence the velocity of the enzyme reaction are discussed below:

Salient features of the active site 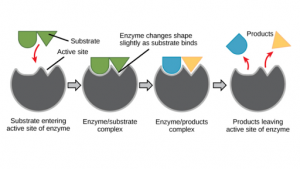