1. They are more palatable and storable to unlimited amount compared to carbohydrates.

2. They have a high-energy value (25% of body needs) and they provide more energy per gram than carbohydrates and proteins but carbohydrates are the preferable source of energy.

3. Supply the essential fatty acids that cannot be synthesized by the body.

5. They are important constituents of the nervous system.

Tissue fat is an essential constituent of the cell membrane and nervous system. It is mainly phospholipids in nature that are not affected by starvation.

(b) Fats and oils which yield fatty acids and glycerol upon hydrolysis.

(b) Glycolipids, which yield fatty acids, sphingosine or glycerol, and a carbohydrate upon hydrolysis.
They may also be glyceroglycolipids or sphingoglycolipid depending upon the alcohol group present (glycerol or sphingosine).

Hydrolysis product of simple and compound lipids is called derived lipids. They include fatty acid, glycerol, sphingosine, and steroid derivatives.

Steroid derivatives are phenanthrene structure that are quite different from lipids made up of fatty acids.

Steroid is a biologically active organic compound with four rings arranged in a specific molecular configuration. Steroids have two principal biological functions: as important components of cell membranes which alter membrane fluidity; and as_ signaling molecules. Hundreds of steroids are found in plants, animals and fungi. All steroids are manufactured in cells from the sterols lanosterol (eukaryotes) or cycloartenol (plants). Lanosterol and cycloartenol are derived from the cyclization of the triterpene squalene.

The steroid core structure is typically composed of seventeen carbon atoms, bonded in four “fused” rings: three six-member cyclohexane rings (rings A, B and C) and one five-member cyclopentane ring (D ring). Steroids vary by the functional groups attached to this four-ring core and by the oxidation state of the rings. Sterols are forms of steroids with a hydroxy group at position three and a skeleton derived from cholestane. Steroids can also be more radically modified, such as by changes to the ring structure, for example, cutting one of the rings. Cutting ring B produces secosteroids one of which is vitamin D3.

Examples include the lipid cholesterol, the sex hormones estradiol and testosterone and the anti-inflammatory drug dexamethasone. 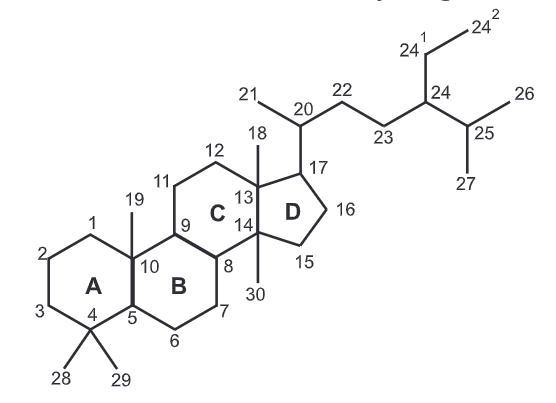 Cholesterol is a lipid with a unique structure consisting of four linked hydrocarbon rings forming the bulky steroid structure. There is a hydrocarbon tail linked to one end of the steroid and a hydroxyl
group linked to the other end.

Cholesterol also serves as a precursor for the biosynthesis of steroid hormones, bile acid and vitamin D. Cholesterol is the principal sterol synthesized by all animals. In vertebrates, hepatic cells typically produce the greatest amounts. 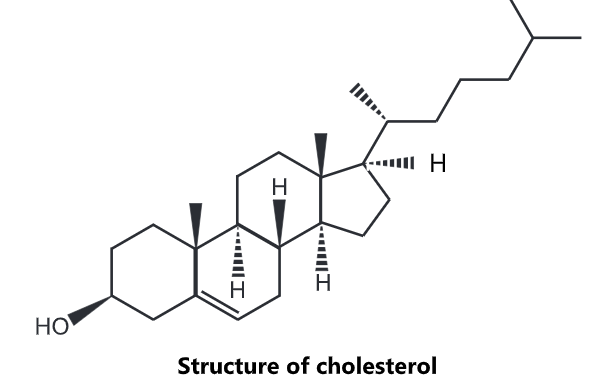