The term carbohydrate is a combination of the “hydrates of carbon”. They are also known as “Saccharides” from the Greek word “Sakcharon” which means sugar.

Carbohydrates are compounds made from three elements: carbon, hydrogen and oxygen. Monosaccharides (e.g. glucose) and disaccharides (e.g. sucrose) are relatively small molecules. They are often called sugars. Other carbohydrate molecules are very large (polysaccharides such as starch and cellulose).

1. Monosaccharides: These are the simplest form of carbohydrate that cannot be hydrolyzed further. They have the general formula of (CH2O)n. E.g. glucose, ribose, etc.

4. Trisaccharides: These on hydrolysis give three molecules of monosaccharides, same or different. E.g. Raffinose.

5. Tetrasaccharides: These on hydrolysis give four molecules of monosaccharides. E.g. Stachyose.

6. Polysaccharides: These give a large number of monosaccharides when they undergo hydrolysis; these carbohydrates are not sweet in taste and are also known as non-sugars. E.g. starch, glycogen etc.

Monosaccharides are the simplest carbohydrates which are often called sugars. They are the building blocks from which all bigger carbohydrates are made.

Monosaccharides have the general molecular formula (CH2O)n, where n can be 3, 5 or 6. They can be classified according to the number of carbon atoms in a molecule:

Monosaccharides containing the aldehyde group are classified as aldoses, and those with a ketone group are classified as ketoses. Aldoses are reducing sugars; ketoses are non-reducing sugars. This is important in understanding the reaction of sugars. However, in water pentoses and hexoses exist mainly in the cyclic form, and in this form that they combine to form larger saccharide molecules.

Ribose is a carbohydrate with the formula C5H10O5.

It is a pentose monosaccharide (simple sugar) with linear form H-(C=O)-(CHOH)4—H, which has all the hydroxyl groups on the same side in the Fischer projection. The term usually indicates d-ribose, which occurs widely in nature. Its synthetic mirror image, l-ribose, is not found in nature. Ribose is an aldopentose (a monosaccharide containing five carbon atoms) that, in its open chain form, has an aldehyde functional group at one end.

As a component of DNA, 2-deoxyribose derivatives have an important role in biology. The DNA (deoxyribonucleic acid) molecule, consists of a long chain of deoxyribose-containing units called Nucleotides, linked via phosphate groups.

Glucose is a monosaccharide with formula C6H12O6 or H-(C=O)- (CHOH)5-H, whose five hydroxyl (OH) groups are arranged in a specific way along Its six-carbon back. Glucose is usually present in solid form as a monohydrate with a closed pyran ring (dextrose hydrate). Glucose is a monosaccharide containing six carbon atoms and an aldehyde group and hence is an aldohexose. The glucose molecule can exist in an open-chain (acyclic) and ring (cyclic) form.

Glucose is the most abundant monosaccharide. When solubilized in water or in the solid form, d-(+)-glucose is dextrorotatory, meaning it will rotate the direction of polarized light clockwise. 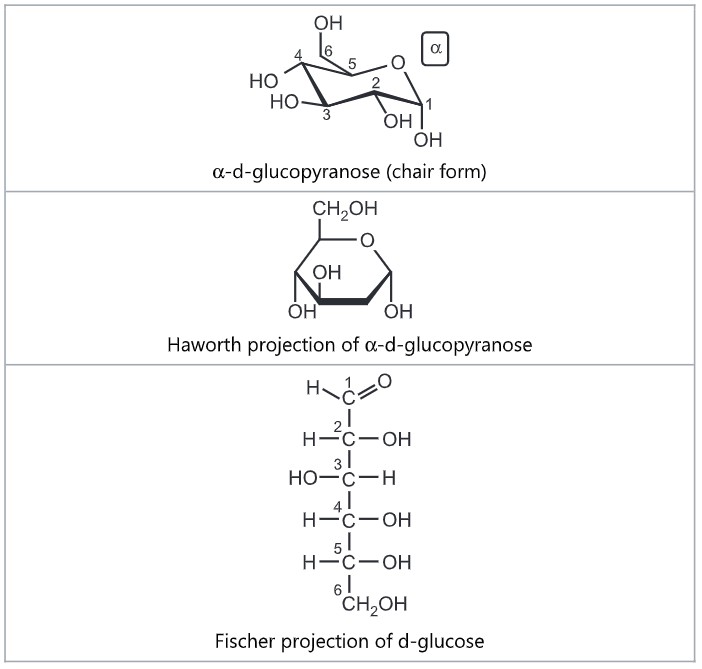 Galactose is a monosaccharide and has the same chemical formula as glucose, i.e., C6H12O6. It is similar to glucose in its structure, differing only in the position of one hydroxyl group. This difference, however, gives galactose different chemical and biochemical properties than glucose. Galactose is an energy-providing nutrient and a necessary basic substrate for the biosynthesis of many macromolecules in the body. Galactose is an important constituent of the complex polysaccharides, Galactose exists in both open-chain and cyclic form. The open-chain form has a carbonyl at the end of the chain. Four isomers are cyclic, two of them with a pyranose (six-membered) ring, two with a furanose (five-membered) ring.

Fructose is a simple ketonic monosaccharide. Fructose is a 6-carbon polyhydroxy ketone. Crystalline fructose adopts a cyclic six-membered structure owing to the stability of its hemiketal and internal hydrogen bonding. This form is formally called d-fructopyranose. In water solution, fructose exists as an equilibrium mixture of 70% fructopyranose and about 22% fructofuranose, as well as small amounts of three other forms, including the acyclic structure. 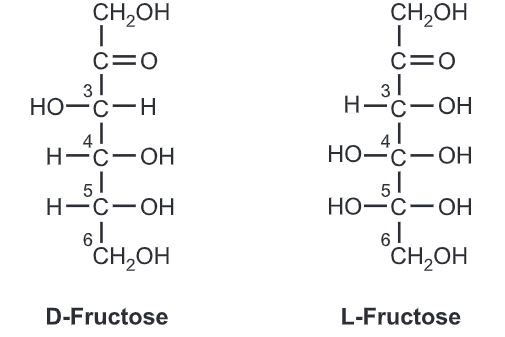 Fructose has higher water solubility than other sugars, as well as other sugar alcohols. Fructose is, therefore, difficult to crystallize from an aqueous solution.

Like glucose, fructose is a source of energy for the cells. Cells process fructose to extract energy through a process called Aerobic respiration, which essentially means burning of fructose in the presence of oxygen to produce ATP, the cellular energy molecule.

This linkage is an oxide linkage formed by the loss of a water molecule. When two monosaccharides linked together by glycosidic linkage, the resulting product is a disaccharide.

Lactose is the primary ingredient found in the milk of all mammals. Unlike the majority of saccharides, lactose is not sweet to taste. Lactose consists of one galactose carbohydrate and one glucose carbohydrate. These are bound together by a 1-4 glycosidic bond in a beta orientation.

The structure of glucose and galactose differs. Galactose’s fourth carbon has a different orientation in lactose than in sucrose. If it were not so the resulting molecule would have just been sucrose (glucose + glucose) instead of lactose.

Also from the structure, we can notice that lactose is a reacting sugar since it has one free hemiacetal hydroxide. Therefore, when we react lactose with bromine water it will give monocarboxylic acid.

Polysaccharides are an important class of biological polymers. Their function in living organisms is usually either structure or storage related. Starch (a polymer of glucose) is used as a storage polysaccharide in plants, being found in the form of both amylose and the branched amylopectin. In animals, the structurally similar glucose polymer is the more densely branched glycogen. The properties of glycogen allows it to be metabolized more quickly, for the active lives of moving animals.

Cellulose and chitin are examples of structural polysaccharides. Cellulose is present in the cell walls of plants and other organisms. It has many uses such as a significant role in the paper and textile industries, cellulose acetate, celluloid, and nitrocellulose. Chitin has a similar structure, but has nitrogen-containing side branches, increasing its strength. It is found in arthropod exoskeletons and in the cell walls of some fungi. It also has multiple uses, including surgical threads. Polysaccharides also include callose or laminarin, chrysolaminarin, xylan, arabinoxylan, mannan, fucoidan and galactomannan. 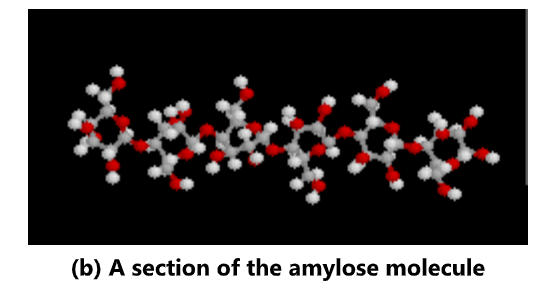 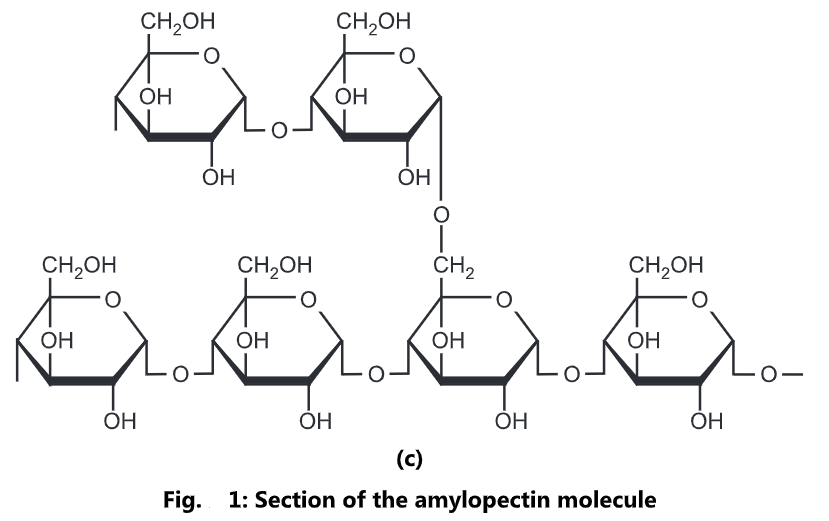 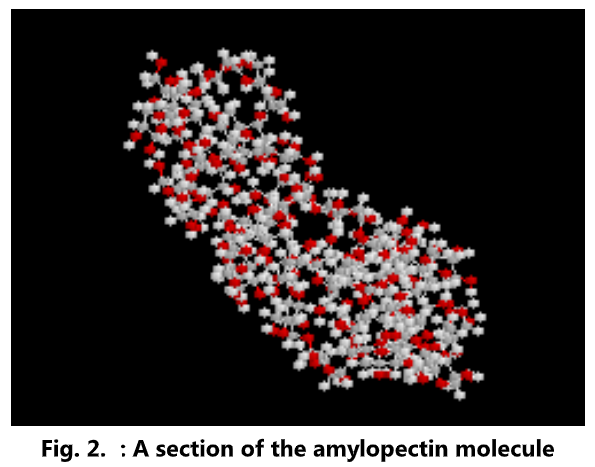 Glycogen is amylopectin with very short distances between the branching side-chains. Inside the cell, glucose can be polymerized to make glycogen, which acts as a carbohydrate energy store. Glycogen is a polymer of glucose (up to 120,000 glucose residues) and is a primary carbohydrate storage form in animals. The polymer is composed of units of glucose-linked alpha (1-4) with branches occurring alpha (1-6) approximately every 8-12 residues. Due to the way glycogen is synthesized, every glycogen granule has at its core glycogen in protein.

The glycogen branching enzyme catalyzes the transfer of a terminal fragment of six or seven glucose residues from a non-reducing end to the C-6 hydroxyl group of a glucose residue deeper into the interior of the glycogen molecule. The branching enzyme can act upon only a branch having at least 11 residues, and the enzyme may transfer to the same glucose chain or adjacent glucose chains.

Peptidoglycan, also known as murein, is a polymer consisting of sugars and amino acids that form a layer outside the plasma membrane of bacteria forming the cell wall. The sugar component consists of alternating residues of β-(1, 4) linked N-acetylglucosamine and N-acetylmuramic acid. Attached to the N-acetylmuramic acid is a peptide chain of three to five amino acids. The peptide chain can be cross-linked to the peptide chain of another strand forming the 3D mesh-like layer. Each N-acetyl muramic acid is attached to a short (4- to 5-residue) amino acid chain, containing L-alanine, D-glutamic acid, meso-diaminopimelic acid, and D-alanine in the case of Escherichia colt (a Gram-negative bacteria) or L-alanine, D-glutamine, L-lysine, and D-alanine with a 5-glycine inner bridge between tetrapeptides in the case of Staphylococcus aureus (a Gram-positive bacteria). These amino acids, except the L-amino acids, do not occur in proteins and are thought to help to protect against attacks by most peptidases.

Cross-linking between amino acids in different linear amino sugar chains occurs with the help of the enzyme transpeptidase and results in a three-dimensional structure that is strong and rigid. The specific amino acid sequence and molecular structure vary with the bacterial species. 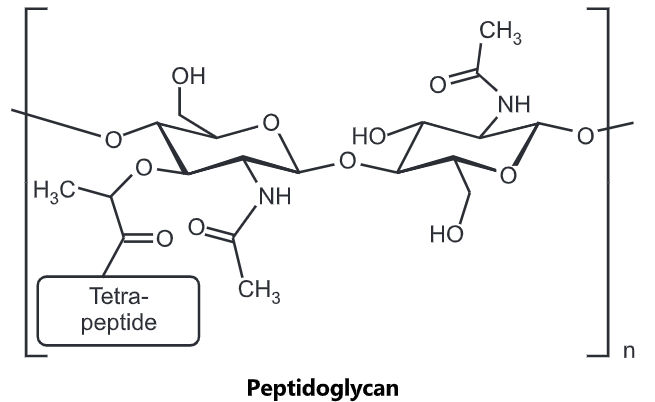 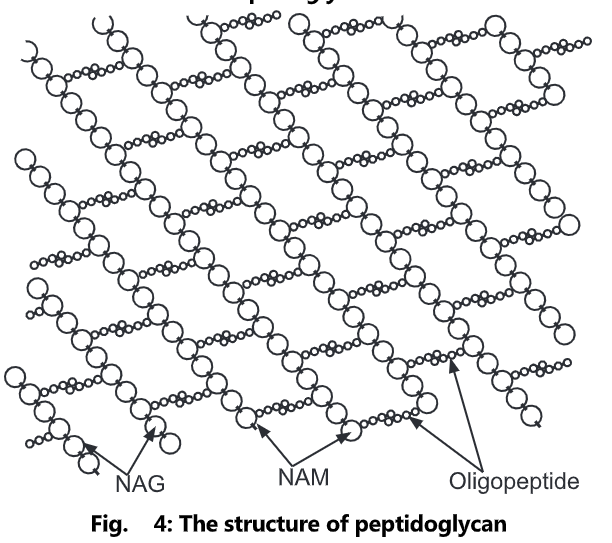 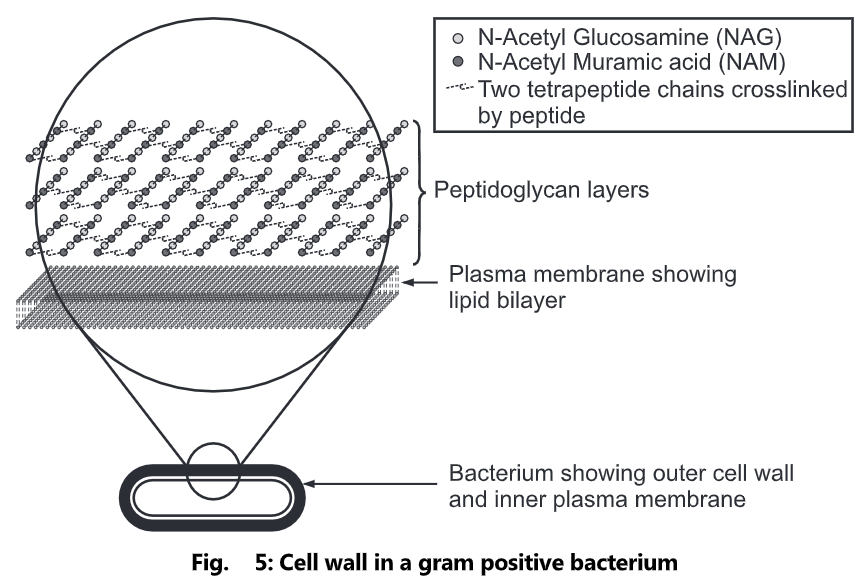 Chitin is a fibrous substance consisting of polysaccharides, which is the major constituent in the exoskeleton of arthropods and the cell walls of fungi. Chitin (C8H13O5N), a long-chain polymer of N-acetylglucosamine, is a derivative of glucose. Chitin is a primary component in the exoskeletons of arthropods and crustaceans and is found in the cell walls of fungi. It is a polysaccharide, and it is
excreted by the epidermal cells in arthropods. 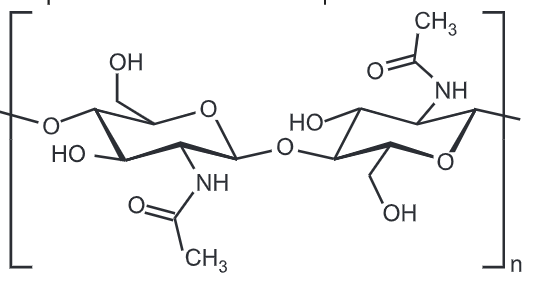 Chitin is a modified polysaccharide that contains nitrogen; it is synthesized from units of N-acetyl-D-glucosamine (to be precise, 2-(acetylamino)-2-deoxy-D-glucose). These units form covalent β-(1 – 4)-linkages (like the linkages between glucose units forming cellulose). Therefore, chitin may be described as cellulose with one hydroxyl group on each monomer replaced with an acetyl amine group. This allows for increased hydrogen bonding between adjacent polymers, giving the chitin-polymer matrix increased strength.