From earliest times, disease always appeared in association with natural phenomena such as earthquakes and floods. Although ancient Greek and Roman physicians suspected that certain types of disease were caused by invisible, minute agents but no direct proof for this view was found until the century. The concept of infectious disease and its spread preceded the poor existence of pathogenic forms of small life. Fungi were the first microorganisms shown to be pathogenic.

1) Agostino Bassi (1834) proved the presence of fungi as a cause of infection in silkworms.

3) M. J. Berkeley (1845) proved the role of a fungal pathogen in a disease called late blight of potatoes. Pasteur (1865) noted the role of protozoa in the pebrine disease of the silkworm in the silk industry.

4) Ignaz Semmelweis (1850) had succeeded in the prevention of the spread of childbirth-fever in clinics. He started the use of disinfectants in medical practice. He mentioned that hands should be washed with calcium hypochlorite solution before a visit to the patients by a doctor. This reduced the mortality rate of infection among pregnant women after delivering the child.

5) Joseph Lister and antiseptic surgery – Joseph Lister (1867) an English surgeon reasoned that surgical infections, sepsis might be actually caused by microbes. He used heat sterilized surgical instruments during surgery and found that no sepsis occurred after surgery. He started the use of phenolic for wound dressing. This has the property of disinfectant and killed the pathogen.

6) Louis Pasteur – Pasteur stated that if germs were the cause of fermentation, they could just as well be the cause of contagious diseases. This proved to be true for many diseases such as potato blight, silkworm diseases, and anthrax. After studying the characteristics of germs and viruses that caused diseases, he and others found that laboratory manipulations of the infectious agents can be used to immunize people and animals.

7) Robert Koch – The first direct evidence of the role of bacteria as the causative agent of the disease was given during his studies on anthrax disease. Robert Koch. In his experimental work, Robert Koch selected a sheep suffering from anthrax and injected infectious material from lesion [fluids of eyeballs of infected cattle] or another clinical specimen into healthy mice in his laboratory.
After a few days, all mice acquired the infection. Now from infected mice, a piece of the spleen was separated by dissection. In an aseptic condition, it was transferred to the beef serum to provide nutrition. The rod-shaped bacilli present in the infected spleen grew in pure form and increased in numbers.
He observed that after a certain incubation period all rod-shaped structures were converted into round oval refractile bodies, called endospores. These endospores did not multiply but can reform large rod-shaped cells on germination in favorable conditions. When these bacteria were injected into the new healthy mice in the laboratory, they also acquire anthrax infection with the same types of symptoms of the disease.
Koch’s postulates – Postulate is the criteria to establish the relationship between pathogenic microbe and disease
l) In every case of disease, a specific microorganism must be found in an infected man or animal and it must be absent in a healthy individual.
2) The suspected microbe should be isolated from the infectious material of the infected animals and should be grown in pure culture.
3) When injected into normal healthy experimental animals like mice, this isolated pure culture of the pathogen should develop the same types of symptoms of the disease. It means it must reproduce the specific diseases in laboratory animals.
4) The same microorganism must be recovered in the pure form again from experimentally infected host animals. 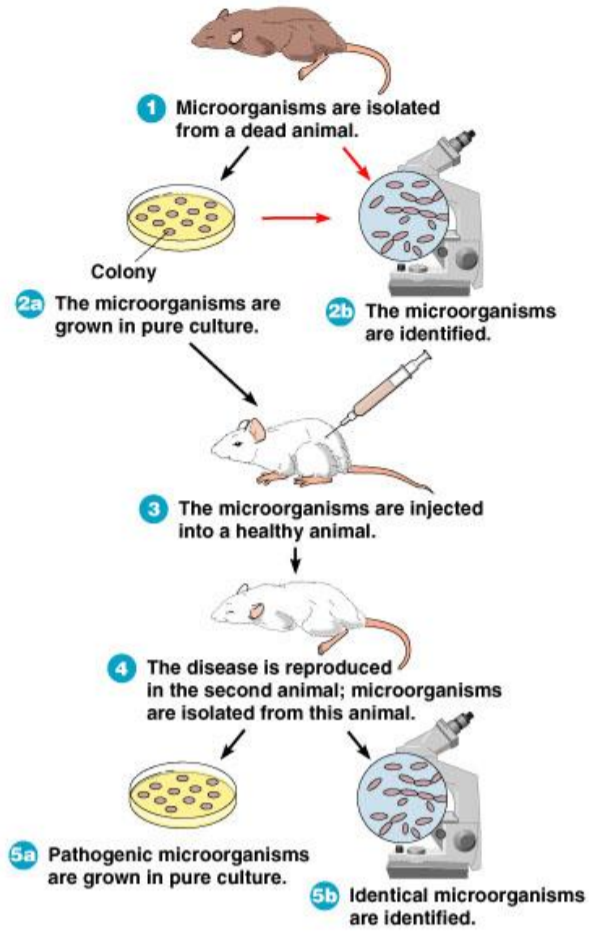