Distribution:
It occurs throughout India. The jowar stem borer is commonly called a spotted stalk borer or pink borer. 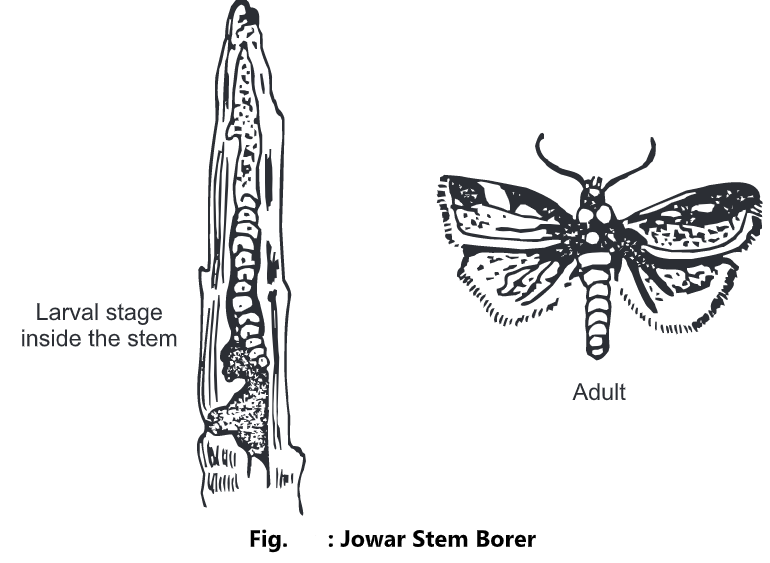 Host Plants:
This is primarily a jowar and maize pest, but it has also been observed on bajra, ragi, and other grasses.

(i)Handpicking or light trapping of adult moths and collection of their eggs for destruction.
(ii) Burning of stubbles and trash, which harbour borers and serve as a source of infestation for the next crop.
(iii) Changing the sowing and harvesting timings reduce infestation.
(iv) Crop rotation is another cultural practice that does not allow the pest of one crop to survive next year for lack of its host.
(v) Growing resistant varieties of jowar like CHS-7, CHS-8, Indian sorghum types IS-5566, 5285 and 5613.

(i) For the Chilo on jowar a spray of 0.05% lindane or 0.1% endosulfan on 15 days old plants has been found effective. This may be followed after another fortnight with a second application of 1.0% lindane or 4% endosulfan granules. A third application with 0.2% carbaryl spray may be carried out, if found necessary.
(ii) If the crop infestation is noticed, dusting of crop in the early stage with 10% BHC at the rate of 25 kg per hectare or spraying the crop with 350-400 ml of aldrin or dieldrin in 200 litres of water helps to control the pest.

(i) The hymenopteran, Trichogramma minutum is employed as an egg parasite.
(ii) Apanteles flavipes and Bracon brevicornis as larval parasites.
(iii) The lady beetles, Coccinella septempunctata and Menochilus.
(iv) Sexmaculata have been recorded predating on early stages of the larvae of this pest.