Integrated control derives its uniqueness of approach from its emphasis on the fullest practical utilization of the existing mortality and suppressive factors in the agro-ecosystem. To achieve this goal, crop production must be guided by the following two principles:
(i) Pest control should be developed and applied in the total environment. The pest populations are managed in such a manner that existing, limiting and regulatory factors are exploited to the fullest extent possible and without disturbance to the regulation of other pests. This principle defines the underlying philosophical approach to integrated control.
(ii) Additional mortality or regulatory factors are introduced into the environment at appropriate times to maintain the pest population at levels below those causing economic injury. These levels should be determined in terms both of the foreseeable crop less and of the economics of crop production and marketing. This principle defines the goal of the integrated control system.
Attempts to totally suppress pests by insecticides may lead to the following problems:
(a) Development of resistance to chemicals in pest populations.
(b) Outbreaks of secondary pests.
(c) Resurgence of treated populations.
(d) Unacceptable residues on food and forage products and associated legal complications.
(e) Destruction of beneficial predators, parasites and pollinators.
(f) Hazards to personnel involved in insecticide application, domestic animals and wildlife.
(g) Expense of pesticides, involving the cost of material and labour and maintenance of equipment.
In integrated pest management, the ecological factors are exploited and the control programmes are so designed that they are compatible with natural mortality factors in order to optimize control rather than maximize it.

Five major components can be identified in all pest control management programmes.
(a) Understanding agro-ecosystems.
(b) The determination of pest damage thresholds and of economic thresholds.
(c) Means of monitoring populations of pests and their natural enemies.
(d) A decision-making framework to determine the action to be taken.
(e) Methods of selectively manipulating pest populations. 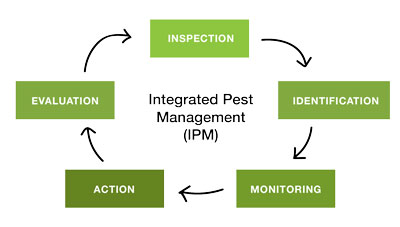 Regular farm operations are performed so as to destroy insects or prevent their injuries. Cultural control is carried out by the following farm practices:
(a) Crop rotations.
(b)  Tilling of the soil.
(c) Variations in the time or method of planting or harvesting.
(d) Destruction of crop residues, weeds, volunteer plants, trash.
(e) Pruning, thinning.
(f) Fertilizing and stimulating vigorous growth.
There are some examples of this method that minimize the pest populations.
(i)Strip harvesting of alfalfa hay fields which prevent migration of bugs, Lygus, Hesperus into adjacent cotton when alfalfa is mowed. Similarly, interplanting of alfalfa strips in the cotton field attract Lygus out of the cotton.

(ii) Destruction of stalks after harvesting of tobacco as diapausing pupae is present on tobacco foliage of stalks.