The Kreb’s cycle was proposed by Hans Adolf Kreb in 1937. The cycle is named in his honor and he was awarded the ‘Nobel prize’ for ‘Physiology and Medicine’ in 1953.

The citric acid cycle essentially involves the oxidation of Acetyl CoA to CO2 and H20.

TCA cycle basically involves the combination of a two-carbon acetyl CoA with four-carbon oxaloacetate to produce a six-carbon tricarboxylic acid. citrate. In the reactions that follow, the two carbons are oxidized to CO2, and oxaloacetate is regenerated and recycled.

Location of the TCA pathway

The enzymes of the TCA cycle are located in the ‘mitochondrial matrix’.

This cycle not only supplies energy but also provides many intermediates required for the synthesis of amino acids, glucose, heme, etc. The Krebs cycle is the most important central pathway either directly or indirectly almost all the individual metabolic pathways.

Reactions of the citric acid cycle

There is a total of eight steps in the cycle: four of them are oxidations, in which the energy of oxidation is very efficiently conserved in the form of the reduced coenzymes NADH and FADH2.

1) Formation of citrate – The first step of the cycle is the condensation of acetyl CoA and oxaloacetate. catalyzed by the enzyme citrate synthase gives the product citrate. a tricarboxylic acid. The CoA is released from the reaction for recycling. 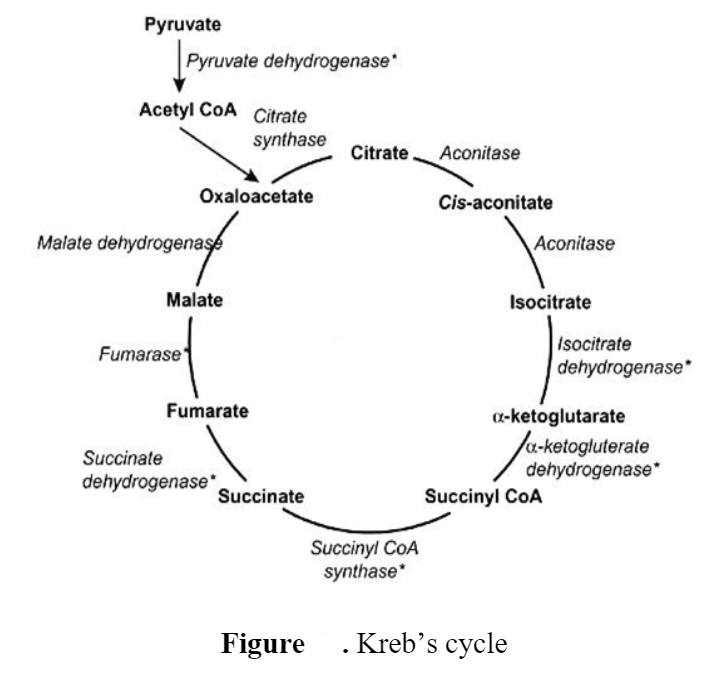 3) Formation of α-ketoglutarate – In this step. isocitrate dehydrogenase catalyzes the oxidative decarboxylation of isocitrate to form α-Ketoglutarate. In this reaction oxalo succinate is formed as a transient intermediate. which does not leave the binding site of an enzyme until decarboxylation converts it to α-ketoglutarate. This is the first oxidative step of the pathway: hence, the formation of NADH and the liberation of CO2 occur at this stage.

6) Oxidation of succinate to fumarate – In this reversible reaction succinate is oxidized to fumarate by enzyme succinate dehydrogenase. This is the only enzyme in the TCA cycle that is membrane-bound (Bound to the inner mitochondrial membrane in eukaryotes and to the plasma membrane in prokaryotes). The reaction results in the production of FADH, and not NADH. This is due to the fact that the reducing power of succinate is not adequate to reduce NAD+, hence FAD is utilized.

7) Formation of malate – This reaction involves the reversible hydration of fumarate into malate catalyzed by the enzyme fumarase also known as fumarate hydratase.

Actually, there is no beginning or end of the TCA cycle if any of the intermediates are produced within the mitochondrion, they can participate in the cycle but they will always be regenerated. The actual fuel for the cycle is Acetyl CoA and this is not regenerated. its carbon atoms are liberated as CO2 at steps 2 and 3 of the cycle.

In the citric acid cycle, during the oxidation of 1 molecule of acetyl CoA, 4 reducing equivalents i.e. 3 NADH and | FADH2 are produced. These 3 NADH molecules are further oxidized via electron transport chain coupled with oxidative phosphorylation, results in the synthesis of 9 ATP molecules, whereas 1 FADH2 leads to the synthesis of 2 ATP molecules. Along with this, there is one substrate-level phosphorylation reaction that results in the formation of 1 GTP molecule. Thus a total of 12 ATP molecules are produced from 1 acetyl CoA.