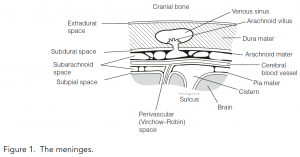 The subdural space is a potential space between the dura mater and the arachnoid mater. It is traversed by cerebral veins entering the venous sinuses in the dura.

Cerebrospinal fluid (CSF) is actively secreted by choroid plexuses situated in the lateral, third, and fourth ventricles. The flow of CSF is from the lateral ventricles through the foramen of Munro into the third ventricle, and then through the aqueduct of Sylvius into the fourth ventricle. From here it drains via three orifices into the subarachnoid space. Here it equilibrates with extracellular fluid in the perivascular spaces. Finally, it is dumped into the venous sinuses via the arachnoid villi.

The choroid plexus consists of a cuboidal epithelium covering a core of a highly vascular pia mater. In adult humans, CSF is secreted at about 500 cm3 day-1 into a steady-state volume of 100–150 cm3. Of this, about 30 cm3 is in the ventricles and the rest is in the subarachnoid space. Cerebrospinal fluid is turned over about every 5–7 hours. 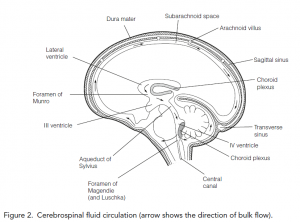 The choroid plexus secretes some substances and absorbs others, most by active transport mechanisms. In this way, it acts as a selective interface between blood and CSF, the blood–CSF barrier. The result is that by comparison with blood plasma CSF has somewhat higher Na+, Cl-, and HCO3- concentrations but lower K+, urea, glucose, and amino acid concentrations. Although the protein concentration of CSF is about 1000-fold lower than blood plasma, its higher ionic concentration gives the two fluids the same osmolality.

Aspects of ion transport across the blood–CSF barrier is shown in Figure 3. Na+, K+-ATPase on the apical border of the epithelial cell pumps sodium into the CSF. This generates a sodium gradient that drives two secondary active transport mechanisms bringing Na+ across the basolateral border; Na+–H+ exchange and a Na+–Cl- symport. The Cl- influx in turn drives a Cl-–HCO3 – antiport. Bicarbonate brought into the cell in this way is added to that formed intracellularly by hydration of CO2, a reaction greatly accelerated by the high levels of carbonic anhydrase present in the choroid plexus. The bicarbonate diffuses via an apical anion transporter into the CSF. 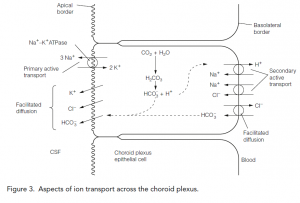 The functions of the CSF are metabolic and mechanical. By equilibrating with brain extracellular fluid unwanted metabolites (choline, dopamine, and serotonin metabolites, urea, creatinine, and K+) are transported into the blood, either via arachnoid villi or choroid plexuses. There are three mechanical effects which are protective: