The History of discovery

Mycobacterium leprae, the causative agent of leprosy, was discovered in 1874 by the Norwegian scientist G. Hansen.

Structure and Properties of Mycobacterium leprae 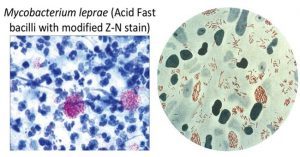 Pathogenesis and Clinical Findings in Leprosy

Specific Treatment and Prophylaxis of Leprosy