Radioactive hybridization procedures are used in most of the research laboratories. Nucleotides in this method are labeled with a radioactive isotope and thus resulting in the formation of labelled nucleic acids. These radioactively labeled nucleic acids are then used as probe in radioactive hybridization procedures. In a standard radioactive hybridization detection system, the sample DNA is first bound to a solid support. Then, radioactively labeled probe is mixed with the sample DNA. Then a washing is given to remove any non-hybridized probe from the mixture. The radio-labeled probes are then detected (in solution or within a solid sample) by autoradiography. The most commonly used radioactive isotopes are 32P, 33P, 3H and 7S. Amongst these radio-isotopes 32P is most widely used because 32P emits β-particles (high energy) which have a high degree of sensitivity for detection. But 32P has many disadvantages also. Such as:

(a) Direct non-radioactive labeling – In direct non-radioactive labeling, a labeled group is attached to a nucleotide and then this labeled nucleotide is incorporated in the reaction mixture. Labeling group in this method can be a fluorophore (chemical group which fluoresce when exposed to light of certain wavelength). Examples of fluorophores are fluorescein (green), rhodamine (red), texas red (red), AMCA (blue), CY3 (red), etc. 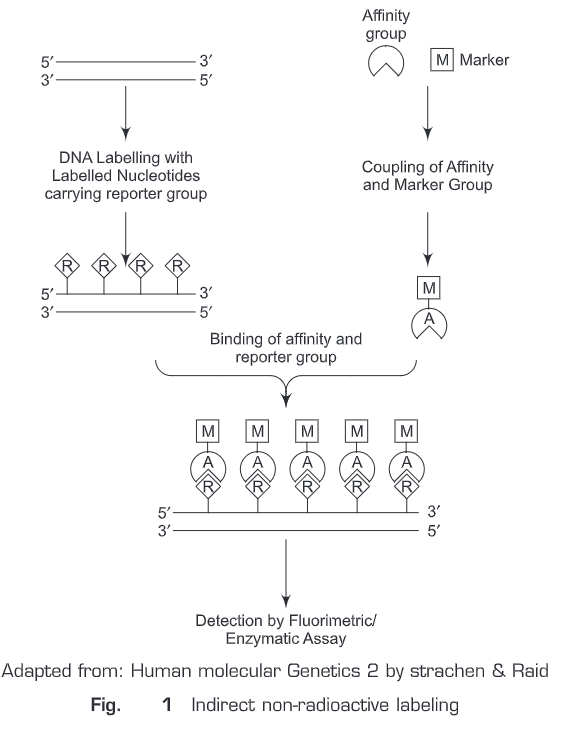 (i) Biotin (a natural vitamin) 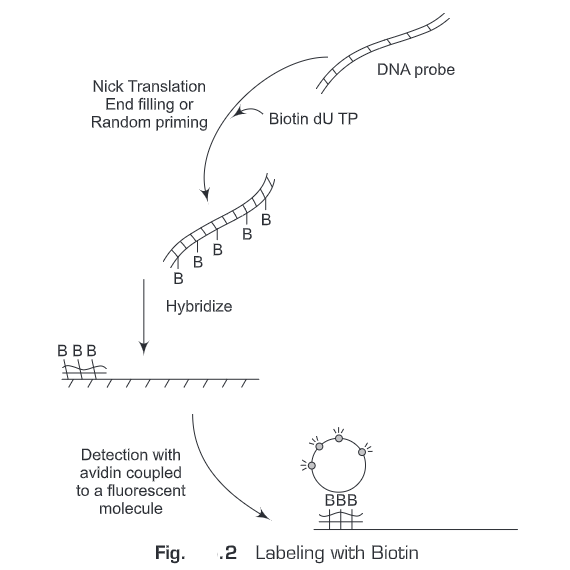 Streptavidin and avidin both have four biotin binding sites. Therefore, a single streptavidin or avidin molecule can bind to biotin-labeled probe and biotin labeled enzyme simultaneously. The activity of the enzyme is not hampered by streptavidin/avidin binding or biotin labeling.

Non-Radioactive hybridization procedures can also be classified into two other classes depending upon the type of substrate used for signal amplification. These are :

(a) Chromogenic detection systems— Chromogenic substrate changes colour after conversion into a specific product by a suitable enzyme which is then measured colorimetrically.

(b) Chemiluminesent detection systems (Fig. 25.4)- Chemiluminescent substrates produces light after conversion into a specific product by a suitable enzyme which is then measured by luminometer. 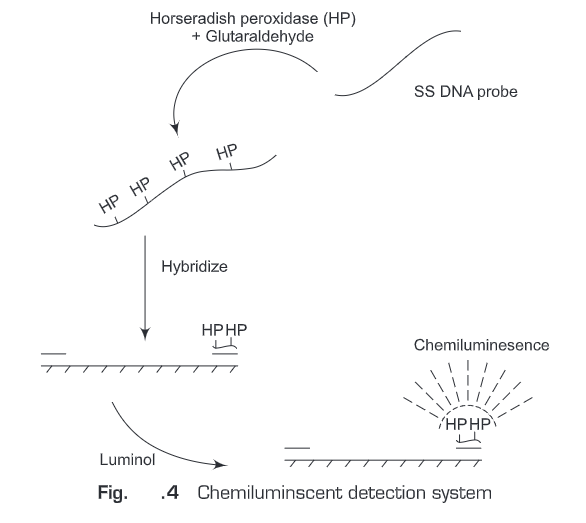 Non-Radioactive hybridization procedures have many more advantages. Such as: