Transcription is more complicated process in eukaryotes compare to prokaryotes. In eukaryotes, three different RNA polymerases transcribe the genes for the four types of RNAs.

RNA Polymerase I: It is located in the nucleolus. RNA polymerase I enzyme transcribes genes encoding three of the four ribosomal RNAs (18S, 28S and 5.8S). It is responsible for the synthesis of precursors for the large ribosomal RNAs.

RNA Polymerase II: It is found in the nucleoplasm of the nucleus. The main function of this enzyme is synthesis of messenger RNAs (MRNAs) and some small nuclear RNA. (snRNAs). RNA polymerase II can recognize thousands of promoters that vary greatly in sequence.

RNA Polymerase III: It is located in the nucleoplasm. It synthesizes the transfer RNAs (tRNAs), 5S rRNAs and some other small specialised RNAs.

RNA polymerase II is central to eukaryotic gene expression and a huge enzyme with 12 subunits. The process of transcription by Pol II can be classified in the form of phases such as assembly, initiation, elongation and termination. 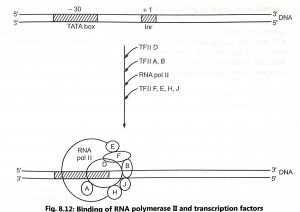