Annelids are segmented ‘worms’ that are oval or round in cross-section. Annelids live in the sea, in brackish and in fresh water and on land, although they are confined to moist microhabitats. Sizes range from 500 mm to 3 m (the Australian giant earthworm Megascolides sp.). Burrowing annelids are important in the ecosystem because they aerate soil, muds and sands, exposing and turning over detritus.

Fossil polychaetes are known from the Ediacaran deposits of the Pre- Cambrian (>700 million years B.P.) and are also well preserved in the middle- Cambrian Burgess Shales. Polychaetes are probably ancestral to the leeches and the oligochaetes, and also to the Mollusca. 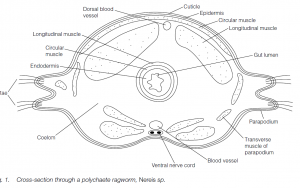 Annelids are bilaterally symmetrical, triploblastic animals. An ectoderm is present on the outside; endoderm lines the gut lumen. Between the two is mesoderm, which forms the muscles, reproductive organs, blood vessels and excretory organs. The main enclosed body cavity is the coelom, formed by the splitting of the mesoderm. The body is segmented: this repeating, metameric segmentation is reflected in annular rings seen on the outside of the body. These delineate the sites of the transverse septa which divide one segment from another.

Most are predators or scavengers: swimming forms catch fish larvae. Tubiculous marine annelids may filter-feed as they lie buried in the substratum: they may have elaborate fan-like body extensions covered with cilia and mucus for filtering water containing plankton. There is a straight gut with a mouth and an anus: food is passed through it by peristaltic contractions of the gut wall muscles.

The antagonism of circular and longitudinal muscles acting against the hydrostatic skeleton facilitates movement; locomotion in polychaetes may be aided by body projections (parapodia). Polychaetes and oligochaetes use chaetae (setae) to grip the substratum. Leeches may use a looping, hirudiform movement involving their anterior and posterior suckers.

Annelids employ a hydrostatic skeleton acting against the turgor of the deformable but constant volume of the coelomic fluid. The segmental division of the coelom facilitates more localized control.

Gas exchange is through the moist body wall or through extensions of the wall in the form of gills or parapodia. There is a closed circulatory system with blood which may contain hemoglobin (erythrocruorin) or chlorocruorin as respiratory pigments. The valved vessels contract to propel the blood in one direction, anteriorly in the dorsal vessel and posteriorly in the ventral vessel; segmental vessels return blood to the dorsal vessel via the body wall or the gut wall.

Excretion is via nephridia: these ciliated funnels, of which there are two per segment, discharge to the exterior through pores.

The nervous sytem has cerebral ganglia which are linked to a double ventral nerve cord by a circumpharyngeal commissure (connecting ring). In polychaetes and leeches, cephalization is particularly evident: eyes, usually with retinas and lenses, are frequent. The whole body may be covered with photosensitive epidermal cells. Statocysts associated with balance are situated near the cerebral ganglia.

Polychaetes have separate sexes, with gametes produced in many segments; a protostome pattern of development via a trochophore larva is seen in marine forms; oligochaetes and leeches are hermaphrodite with direct development.

Three classes are recognized: the Polychaeta, the Oligochaeta and the Hirudinae.

There are about 5400 species of polychaete worms, usually possessing a pair of fleshy, flap-like parapodia per segment. Each has bristles or chaetae (setae). Most species are marine, and include lugworms (which burrow in sand or mud), sabellid fanworms with tubes encrusted with chips of rock and shell, errant ragworms which can swim or crawl and burrow in the substratum, and the foreshortened sea-mice. Some freshwater and soil species are found. Polychaetes have separate sexes and fertilization is external. Some adults brood their young: the male may protect and aerate the eggs which may hatch into free-swimming trochophore larvae.

Vegetative (asexual) reproduction is seen, whereby individuals are budded off or are transformed into gamete-bearing epitokes. Regeneration of lost parts can occur. An example is Nereis diversicolor (ragworm).

The 3100 species of oligochaetes include the earthworms and other relatives. Some live in estuarine and fresh waters. They lack parapodia. Cephalization is less marked in this class. Oligochaetes are usually hermaphrodite, but each individual mates with another worm. Asexual budding and regeneration of lost parts is seen, but less so than in polychaetes. An example is Lumbricus terrestris (common earthworm).

The 300 species of leeches, with anterior and posterior suckers, are frequently blood-sucking ectoparasites on other animals from many different phyla. There are some free-living predatory and detritivore (detritus-eating) leeches. Leeches lack parapodia and chaetae (setae). The body is usually flattened dorso-ventrally with 32 segments [although there may be several external grooves (annuli) per segment]. The coelom is restricted by the development of botryoidal tissue. Leeches are usually hermaphrodite; one leech will attach to its mate with its suckers and in some species will drive dart-like spermatophores into the partner’s body. The eggs develop directly in a desiccation-resistant cocoon and hatch as young adults. Leeches do not reproduce asexually nor are they capable of regeneration. An example is Hirudo medicinalis (medicinal leech).

▶Related phyla There are three phyla which are related to the annelids: the Echiura, the Pogonophora and the Siphuncula.

There are about 130 species of echiurans, living on the bottoms of shallow seas where they inhabit rock crevices or burrow into mud and sand; typically they are from 15 to 50 cm long. They are bilaterally symmetrical, triploblastic coelomates. The soft body is covered by a cuticle. Spoonworms feed by using a mucus ‘net’ to trap food and to sweep it into the ciliated groove at the base of the spoon-shaped, extensible proboscis (which in some species can extend the body’s length to about 2 m).

Spoonworms have separate sexes, with extreme sexual dimorphism in some species. Eggs and sperm are released into the coelom where they mature, are collected by a collecting organ and are released into the sea where fertilization occurs. Development follows a protostome manner with spiral cleavage, although segmentation as in Annelida is absent. Examples are Echiurus spp.

There are about 120 known species of marine, tube-dwelling pogonophorans, a little known group found on the edges of continental shelves. They are bilaterally symmetrical, triploblastic coelomates. They have an anterior tuft or ‘beard’ of tentacles. The worms live in secreted, chitinous tubes made up of rings. Lengths vary from 10 cm to more than 2 m. Pogonophorans are unusual in lacking a gut: food is taken up through the epithelium or using symbiotic bacteria.

The sexes are separate. Cleavage of the egg is said to be spiral, as in protostomes, although some zoologists find in the Pogonophora affinities with the Hemichordata (which would suggest that they should be considered as deuterostomes). An example is Siboglinum sp. 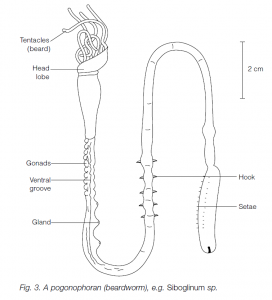 These are unsegmented, bilaterally symmetrical, triploblastic coelomate, burrowing marine worms: there are about 300 species. Their length varies from about 2 mm to 75 cm. The sexes are separate: sexual reproduction follows a sequence not dissimilar to that described for Echiura (above), except that the gametes are released into the coelom whence they escape to the outside via the excretory metanephridia. An example is Themiste lageniformis.