There are about 110 000 species of molluscs, varying in size from less than 1 mm to 1.3 m in the giant clam (Tridacna sp.); the giant squid (Architeuthis sp.), with tentacles 20 m long, is the largest known invertebrate. They are softbodied animals which gain support from a hydrostatic skeleton, but most have an internal or external shell. They possess a mantle, a covering of the body wall which lines the shell and secretes the calcium carbonate which constitutes the shell. Most molluscs are aquatic, but some live in damp terrestrial habitats. Molluscs are protostomes.

A radula is characteristic of most molluscs: this hard, chitinous strip bearing teeth is used as a file or a drill to aid foodgathering. Mollusc shells are well preserved as fossils: monoplacophorans and bivalves are known from the middle Cambrian; univalves and cephalopods from the upper Cambrian. Octopuses are found in the late Cretaceous, but squids are found only in Tertiary rocks. It is thought, on the basis of their embryology, that the Mollusca and the Annelida may share a common ancestor, although features such as intracellular digestion, external cilia and the architecture of the nervous sytem may point to closer links with the Platyhelminthes.

Molluscs are triploblastic, coelomate animals which are, at least in their early development, bilaterally symmetrical. The body is unsegmented. The body comprises a head-foot and a visceral mass. The foot is a large, muscular organ used, in many forms, for locomotion or burrowing. In the cephalopods it is extended to form arms and tentacles. The visceral mass contains the major internal organs. The coelom is much reduced, but the cavities of the open circulatory system are greatly expanded to form the major enclosed body cavity, termed a hemocoel (cf. Arthropoda). In cephalopods, there is no large body cavity as the circulatory system is closed. 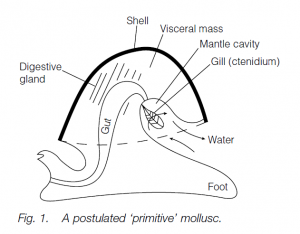 The gut is complete, with a mouth and an anus. Bivalves and some snails are sedentary filter-feeders: the gills are covered by mucus which traps food particles. Cilia waft the mucus to the mouth; many molluscs have a style which is rotated by cilia to pull food-laden mucus into the gut. Chitons, slugs and snails use their toothed radulae to file at algae and other foodstuffs. Large molluscs such as squids may be active, macrophagous predators.

In many species of molluscs the foot is used for creeping or burrowing; cephalopods expel water from the mantle cavity to permit jet-propulsion.

The hemocoel is the main component of the molluscan hydrostatic skeleton. In many species the shell gives additional support.

The cavity beneath the shell may contain the gills (ctenidia) or, in many terrestrial univalves, is vascularized to form a ‘lung’. Respiration is through the body surface (which may be extended to form respiratory tufts), by gills (ctenidia) in the mantle cavity or directly through vascularized mantle cavity surface layers. The hemocoel cavities contain blood in an open circulatory system (in cephalopods the hemocoel is reduced to permit a closed, high-pressure vascular system); there is a dorsal heart.

Excretion is by ‘kidneys’ or metanephridia which drain the coelom.

Except in bivalves, there is extensive cephalization, and sense organs include statocysts (for balance), head tentacles, paired eyes and osphradia which act as rheoreceptors monitoring water flow through the mantle cavity. The nervous system comprises paired pedal cords and visceral cords which unite anteriorly to form a cerebral ganglion or ‘brain’. The cephalopod nervous sytem is arguably the most sophisticated of all invertebrate nervous systems.

In most molluscs, the sexes are separate and external fertilization occurs in water; land snails and nudibranch univalves are hermaphrodite, although they do not normally self-fertilize. Some oysters can reverse their sex from male to female and back, according to the season. The gonads are found near the pericardial coelom. In primitive molluscs, the gametes exit via the excretory ducts, but more advanced forms have complex gonoducts and other copulatory apparatus.

The egg usually hatches to form a trochophore larva which metamorphoses into a veliger larva, but in many marine snails the egg hatches to form a veliger, while the eggs of cephalopods and land snails bypass the larval stage todevelop directly into miniature adults. Some octopuses show parental care of eggs, clams may brood their young and some periwinkle snails are viviparous. Embryonic development follows a protostome pattern.

There are five classes of mollusc: Monoplacophora, Polyplacophora, Gastropoda, Bivalvia and Cephalopoda.

The little-known monoplacophorans are candidates for being the nearest living relatives to molluscan ancestors. There is a single shell plate with an anteriorly directed, peaked apex. The mantle cavity, containing a series of paired gills, forms grooves on either side of the broad foot. There is a radula and a simple digestive system. An example is Neopilina sp.

The 500 species of chitons are considered to have diverged early from the ancestral molluscan line. The body retains its bilateral symmetry, and the nervous and digestive systems are simple. The trocophore larva is similar to that of an annelid. The shell consists of a series of eight overlapping, anterior–posterior arranged plates. Chitons are marine herbivores which graze algae from rocks with their rasping radulae; locomotion is by ripples or waves in the muscles of the foot. An example is Chiton divaceous.

The gastropods are typically aquatic, but some pulmonate gastropods live on land, mainly in damp places, although desert snails (e.g. Sphincterochila sp.) which can estivate during drought periods within their shells are known. The shell, where present, comprises one piece or valve. The foot is used for pedal creeping using antagonistic muscles creating ripples of contraction. Cephalization is notable, with eyes and tentacles present. There is a radula. Within the shell which is often coiled is a visceral mass. Unisexual and hermaphrodite species exist. The classification of the gastropods is controversial; three orders are usually recognized:

(1) Prosobranchiata (e.g. whelks, limpets). These include most gastropods. The majority are marine. The gills are contained within the mantle cavity in front of the heart. The shell may be closed by an operculum. The sexes are usually separate. An example is Nucella lapillus (dog whelk).

(2) Opisthobranchiata (e.g. sea-hares, sea-slugs, sea-butterflies). These marine gastropods have a reduced or absent shell. The single gill lies posterior to the heart or may be absent. Most are carnivores living near to the seashore; a few species swim. An example is Aplysia sp. (sea-hare).

(3) Pulmonata (e.g. snails, slugs). These freshwater and terrestrial gastropods lack gills and respire through a richly vascularized mantle cavity. Shells may be reduced or absent in slugs. They lack an operculum, although a temporary epiphragm may be secreted during a drought. They are usually hermaphrodite herbivores. Examples are Helix spp. (land snails). 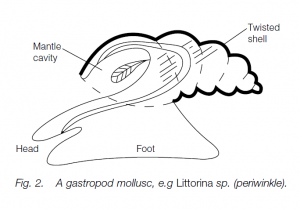 Bivalves are usually marine but there are many freshwater species. The two, hinged valves of the shell can enclose the body completely. Cephalization may be very reduced, with sense organs and the radula being lost. Gills are enlarged and possess ciliary tracts used for filter-feeding: water is passed over the gills by ciliary action – water enters via the shell gap or through an inhalant syphon; it may leave via an exhalant syphon. The foot can be used for burrowing (enzymes to digest lignin and cellulose in wood can, for example, be secreted) or it may be reduced. Powerful adductor muscles close the shell. The sexes are usually separate. Examples are Ostrea sp. (oyster); Mya sp. (clam); Anodonta sp. (swan mussel); Mytilus sp. (mussel). 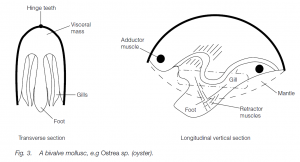 These advanced marine molluscs are active carnivores: they are swimmers or bottom-livers. The head has a radula and there are usually large, sophisticated eyes with an architecture similar to that found in vertebrates. The foot is modified to form a funnel and tentacles (with suckers) around the mouth. There may be one or two pairs of gills within the mantle cavity. The shell is large and chambered in Nautilus sp. and in the extinct ammonites. In most living cephalopods, it is internal (cuttlefishes and squids) or absent (octopuses). A high-pressure, closed vascular system with capillaries is present, resulting from a reduced hemocoel: there is no large body cavity. Locomotion is by jetpropulsion as water drawn into the mantle cavity is forceably expelled via the syphon. Examples include Nautilus sp.; Loligo sp. (squid). 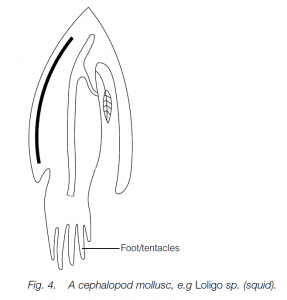