The biosynthesis of a protein or a polypeptide in a living cell is called as translation. The genetic information stored in DNA is passed to RNA (transcription) and it expressed in the language of proteins (translation). Translation occurs by similar mechanisms of prokaryotes and eukaryotes and it is described in five stages.

Translation requires the use of energy by the cl which is provided by the hydrolysis of GTP and ATP. Guanosine-triphosphate (GTP) is used for ribosome movement and in binding of accessory factors. Adenosine triphosphate (ATP) is used to change tRNAs and in removing secondary structure from mRNA. Protein synthesis requires many components such as amino acids, ribosomes, mRNA, tRNA, protein factors and energy sources (ATP and GTP). 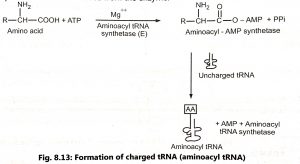 The initiation of polypeptide synthesis in prokaryotes requires 30S and S0S ribosomal subunit, mRNA, tRNAfMet   ,initiation factors(IF-1,IF-2 and IF-3),GTP and magnesium ions. Eukaryotic cells have at least nine initiation factors (eⅠF2, eⅠF23, eⅠF 3, eⅠF4A, eⅠF4B, eⅠF4E ,eⅠF4G, eⅠF5, eⅠF6). The initiation factors bind to 30S ribosomal subunit in the presence of GTP to form 30S-ⅠF complex. The 30S-ⅠF complex binds to the region of the mRNA with The AUG initiation codon. Each mRNA at its untranslational region consists of a ribosome binding site for every polypeptide in the form of polycistronic message. This ribosome binding site (5’- AGGAGGA-3′) is known as Shine-Dalgarno sequence which is important in the binding of mRNA to the 30S-ⅠF complex.

The ribosome has three important binding sites such as aminoacyl-tRNA binding site (A) peptide binding site (P) and exit site (E). The A site receives all the incoming charged tRNA.whereas the P site possesses the previous tRNA with the new polypeptides. The tRNAfMet directly binds with ‘P’ site. The E site is the site from which the ‘uncharged’ tRNAs leave during elongation. Factor IF-1 binds at the A site and prevents tRNA binding at this site during initiation. 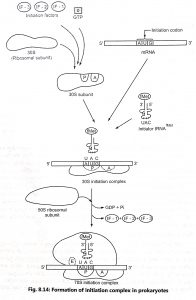 The polypeptide chain is continuously elongated until a termination codon on mRNA reaches to ribosome. The termination of translation is signaled by one of three stop cadons such as UAA, UAG and UGA. The ribosome recognize a stop codon with the help of proteins called termination factors or release factors (RF). In prokaryotes, there are three release factors (RF-1, RF-2, RF-3). RF-1 recognizes UAA and UAG and RF-2 recognizes UAA and UGA. The RF-3 activates the RF-1 and RF-2, hence, it is called ‘stimulatory(s) factor’. In eukaryotes,there is only one RF protein (eRF-1) which is active with codons UAA, UAG and UGA. 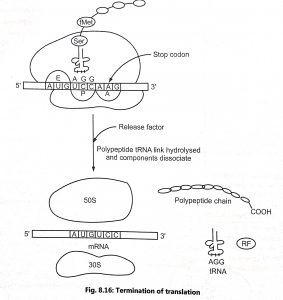 After release, some of the processing events occur in the polypeptide chain. These modifications include protein folding, trimming by proteolytic degradation, intein splicing and covalent changes which are collectively known as post-translational modifications. Many different chemical modifications of the side chains of amino acids or the amino and carboxyl termini of proteins are found. Modifications may involve addition of small groups such as methylation, phosphorylation, acetylation and hydroxylation. Some modifications may occur by the addition of larger molecular structures such as lipid and oligosaccharides.