Digestive systems show great variation in the Animal Kingdom. Gut structures do not always correlate with feeding habits (although large stomachs may reflect large, infrequent meals). There is a close correlation between gut structures and the nature of the ingested food: carnivores tend to have short absorptive intestines. 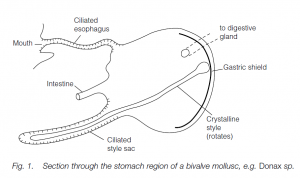 A five-part gut is recognizable.

(1) Reception by the mouth and pharynx. Mechanical trituration can occur here (e.g. use of tongue and teeth in mammals); enzymic digestion may commence; toxic factors may paralyse prey. Fluids lubricate the food.

(2) Conduction and storage in the oesophagus which may be distended to form a crop (birds) or fermentation chambers (ruminant mammals).

(3) Trituration and early digestion in the stomach and the first part of the intestine. Mechanisms for internal trituration may be found in animals which swallow large food masses [e.g. mammalian stomach muscles; muscles and gravel in bird gizzards; rotation of a crystalline style in the bivalve stomach]. In crustaceans, a chitin-lined gizzard precedes the intestine: food is ground in a gastric mill with dorsal and lateral teeth moved by muscles. Enzymic digestion is commonly found in this region. Diverticula are common (e.g. teleost fishes): cilia may propel food into diverticula in invertebrates (e.g. molluscs).

(4) Absorption and further digestion occurs in the vertebrate small intestine: most of the enzymes come from the pancreas. The liver secretes bile. Some absorption occurs in the duodenum but mostly in the ileum. In most invertebrates, digestion has occurred in stomach diverticula and the intestine is absorptive. The area is increased by typhlosole (longitudinal fold, e.g. earthworm), spiral valve (elasmobranchs), folding and villi (e.g. mammals).

Area of the human intestine:

(5) Compaction and formation of feces where much water is absorbed in terrestrial species (particularly important in insect osmoregulation).

The triturated, lubricated food bolus passes down the esophagus by peristalsis; the esophagus is lined (like the mouth) with stratified squamous epithelium. Peristalsis is movement of a muscular tube, such as the gut, by co-ordinated contractions of longitudinal and circular smooth muscle in a definite (usually anterio-posterior) direction. 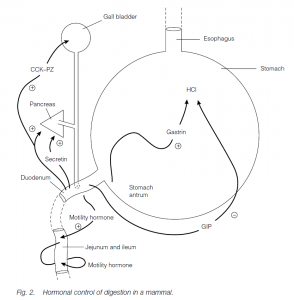 Like the liver, the pancreas develops as an outgrowth of the small intestine, its cells producing large quantities of digestive enzymes which travel to the gut via the pancreatic duct, which joins the common bile duct just before its junction with the bowel. The islets of Langerhans are important endocrine glands producing hormones (e.g. insulin, glucagon) associated with blood glucose control

The basic pattern is three incisors, one canine, four premolars and three molars on each side, in each of the upper and lower jaws. The dental formula is I 3/3 C 1/1 PM 4/4 M 3/3.

(2) Rodents (e.g. squirrel): one incisor, no canines or anterior premolars. Diastema between the incisor and back premolars allows cheeks to be drawn in, closing off the front of the mouth. There is enamel only on the front edge of the incisors: dentine wears away leaving a chisel edge. Incisors grow, as do premolars and molars. A longer length of articulation with the skull allows backward and forward movements. There is a nonrigid join between the mandibles: thus two incisors can move relative to each other, for example when opening nuts. All these variations facilitate gnawing.

(4) Perissodactyls (e.g. horse): three incisors but no canines; the first premolar is vestigial. There is diastema and the molars and premolars are square. The high-crowned teeth, which grow throughout life, have rough, grinding surfaces.

(6) Proboscideans (e.g. elephant): the nose and upper lip form a prehensile trunk. One upper incisor grows throughout life to form the tusk (for defense). There are no canines or adult premolars; three molars per jaw, used one after another, develop in a series from front to back. Molars consist of many plate-like ‘cones’ joined by cementum producing a hard working surface with transverse ridges.

(8) ‘Edentate’ groups (e.g. anteaters, pangolins): they have a tendency to lose teeth in evolution. They possess a long tongue with adhesive saliva.