The immune system describes a set of the major defense mechanisms to protect the body against invasion by harmful agents. It is part of control and coordination and could be seen as an aspect of homeostasis. Two types of immunity can be described:

(1) Innate or natural immunity which includes nonspecific substances present in body fluids such as tissue lysozymes and antiviral interferons (these are not usually specific and many are present before an infection), nonspecific phagocytic cells such as polymorphonuclear neutrophils (‘polymorphs’) and macrophages, and the integrity of the skin and the mucosae.

(2) Adaptive or acquired immunity which has the following features:

The adaptive immune response complements the natural immune system and the various components work as a defensive whole.

An antigen is any substance capable of eliciting an adaptive immune response: common antigens include large macromolecules such as proteins and nucleic acids, cells from individuals genetically different from ‘self’, pathogenic microorganisms such as viruses, bacteria, fungi, protoctistans and ‘worms’, and entities such as pollen and animal dander. The macromolecules on the surface of cells and pathogens determine their antigenicity.

Invertebrates tend to possess features characteristic of the natural immune system such as phagocytic cells and nonspecific agglutinins and lysins in body fluids: there is little specificity or memory. In deuterostome animals such as starfishes and tunicates, cells morphologically similar to lymphocytes are seen and there is evidence of a rudimentary major histocompatibility complex (MHC); no true immunoglobulin antibodies are discernible.

The vertebrates all possess a full armory of components of the adaptive immune system such as immunoglobulin antibody molecules and an MHC. However, the responses in poikilothermic vertebrates such as agnathans (lampreys), cartilaginous fishes and urodele amphibians tend to be somewhat slow and less precise, and very temperature-dependent. Teleost fishes (e.g. herrings), anuran amphibians (frogs and toads), birds and mammals seem, independently, to have evolved rapidly, sophisticated immune responses (which may be the result of, or contribute to, the ‘success’ of these groups).

Immunity can be divided into two ‘arms’. Antibody-mediated (or humoral) immunity is associated with the appearance of antibodies, secreted by cells of the B-lymphocyte series, in the extracellular fluids such as plasma, lymph and external secretions. Antibodies are proteins, structurally described as immunoglobulins which, through the shapes of their binding sites, are characterized by a high physicochemical specificity for their evoking antigens. Cell-mediated immunity is mediated by cells of the T-lymphocyte series with antigen-specific receptors on their surfaces. Reaction of the receptor with its antigen triggers the release of physiologically active cytokines or facilitates directly or, through complex signalling processes, cytotoxic activity towards the invader.

The principal mediators of adaptive immunity are lymphoid cells – the lymphocytes and their descendants of which there are about 1012 in a healthy adult man, weight about 600 g. Lymphocytes originate as stem cells in the embryonic yolk sac, the fetal liver and the adult bone marrow. Some go to the thymus where they undergo a process of division, commitment (acquiring specificity for their particular antigen) and education (“learning” how they will react to antigen), partly under the influence of thymic “hormones”, and emerge as virgin T-cells. Other stem cells undergo a similar process in the bone marrow itself and emerge as virgin B-cells. In birds, the bursa of Fabricius, situated in the cloaca (near the urinogenital and anal openings), acts as a B cell maturating organ. 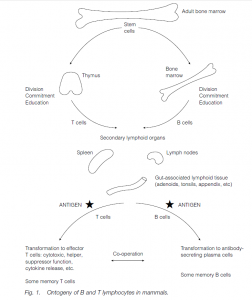 Accessory cells aid the lymphocytes in their functions. These include:

The thymus and the bone marrow (or the bursa in birds) are the primary lymphoid organs. Thymectomy or congenital absence of a thymus results in no T cells and a grossly deficient cell-mediated immunity; other errors or ablations of the system will result in other, appropriate deficiencies in the response. Virgin B and T cells migrate to the relevant parts of secondary lymphoid organs such as the lymph nodes, the spleen and lymphoid nodules in the lining of the gut, the respiratory and urinogenital tracts and the skin. These are strategically situated in the blood, and lymph flows to intercept antigens. Antigen, appropriately presented, stimulates division of the lymphocytes and the initiation of an immune response.

Lymph nodes are bean-shaped organs with afferent lymphatic vessels entering the convex edge and efferent lymphatics leaving the hilum (concave edge). Connective tissue extends in from the capsule forming a loose mesh allowing lymph and cells to percolate through. The outer cortex is densely packed with lymphocytes, the deep cortex (paracortex) having the T cells and the B cells being nearer the edge. The inner medulla has more loosely packed lymphocytes and macrophages. The spleen has red and white cell areas or ‘pulps’. Lymphocytes are in the white pulp, the T cells in cuffs around the arterioles, and B cells are outside them. Red pulp manufactures and stores erythrocytes.