Transplantation: It is an act of transferring cells, tissues, or organs from one site to another. Many diseases can be cured by the implementation of healthy organ tissue or cells (a graft) from one individual (donor) to another in need of transplant (host). Alux Carrel reported the first systemic study of transplantation in 1908, he interchanged both kidneys in series of nine cats. Organs that can be transplanted are the Kidney, heart, liver, pancreas, lungs, thymus, and intestine and tissues include heart valves, bones, tendons, cornea, skin, and veins. The kidneys are the most commonly transplanted organs, followed by the liver and then the heart. A variety of immunosuppressive agents can delay or prevent the rejection of the transplanted organ, e.g. Calcineurin inhibitor, mTOR inhibitor, Anti-proliferative, corticosteroids, and antibodies, etc. Different types of grafts/transplants.

Self tissue is transferred from one body site to another in the same individual. In some cases, autograft is done with surplus tissue or tissue that can regenerate, or tissues more desperately needed elsewhere, E.g. transferring healthy skin to burnt area in burnt patients and use of healthy old vessels to replace blocked coronary arteries.

Allograft is a transplant of an organ or tissue between genetically different markers of the same species. Most human tissue and organ transplants are allografts. The recipient’s immune system will identify the organ as foreign due to genetic differences between the organ and the recipient and attempt to destroy it, causing transplant rejection.

A transfer of organ or tissue between different species. For example, Graft of Baboon heart into a human. Xenotransplantation is often an extremely dangerous and serious type of transplant due to the increased risk of non-compatibility, rejection, and disease carried in the tissue.

In allograft rejection, T-cells play a major role. Old grafts and MHC antigens are responsible for the most intense graft rejection. Tissues that are antigenetically similar are said to be histocompatible. They do not produce an immunological response that leads to tissue rejection. The various antigens that determine histocompatibility are encoded by more than 40 different loci, but loci responsible for the most vigorous rejection reactions are located within MHC. The organization of MHC is called H-complex in mice and HLA complex in humans. Various tissue typing procedures are used to screen potential donors and recipients.

Initially, they are screened for ABO blood group compatibility

Ab produced in the recipient against any of these Ag’s present on transplant tissues.

These tests are used for HLA typing of potential donor and recipient. HLA is based on Ab-mediated microcytotoxicity used to indicate the presence or absence of various MHC alleles.

WBC’s are potential donor and recipient and are distributed into the series of wells on a microtitre plate.

Abs specific for Class I and Class II MHC alleles are added to different wells.

Complement is added to wells and cytotoxicity is accessed by the uptake or exclusion of various dyes by the cells.

WBC’s express MHC allele for which a particular monoclonal antibody is specific, then the cells will be lysed on the addition of complement and these dead cells will take up a dye such as trypan blue. 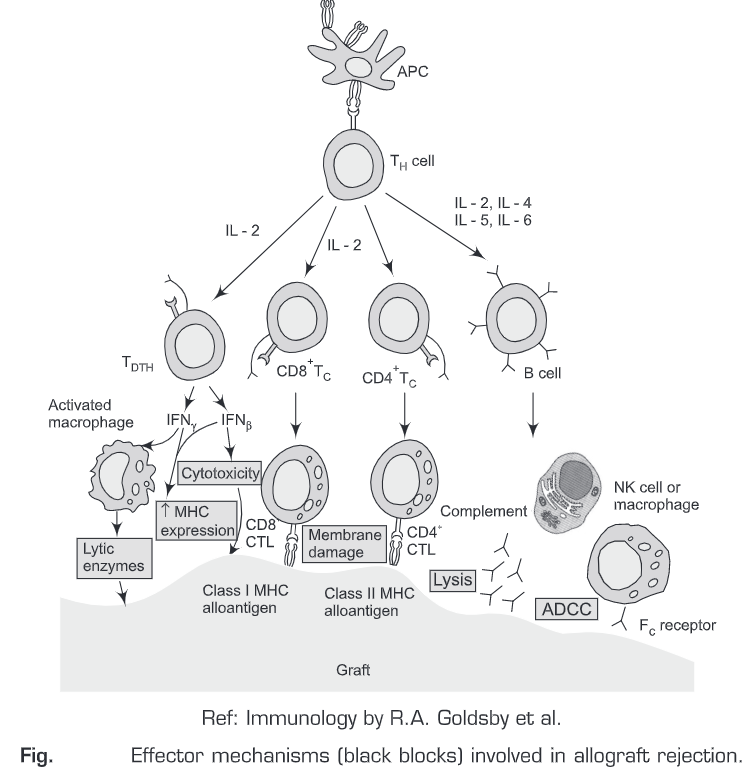 For a number of illnesses, a transplant is the only means of therapy. For example, transplanted organs are the heart, kidney, pancreas, lung, skin, etc. Immunosuppressive drugs greatly increase the short-term survival of transplant but medical problems arise from using these drugs and chronic rejection prevail. Factors responsible for which an organ is transplanted depends on:

Heart transplantations are used to remove a damaged or diseased heart and replaces it with a healthy one. A healthy heart comes from a donor who has died. Heart transplants are now the third most common organ transplant operation in the U.S. Doctors may recommend a heart transplant for heart failure caused by: Coronary artery disease, Cardiomyopathy (disease of the heart muscle), Heart valve disease, and multiple congenital heart defects in babies.

Liver transplantation removes the diseased liver and replaces it with a healthy one. Most transplant livers come from a donor who has died. Sometimes a healthy person donates part of his or her liver for a specific patient. In this case, the donor is called a living donor. The most common reason for transplantation in adults is cirrhosis (healthy liver cells are killed and replaced with scar tissue) and in children is biliary atresia (a disease of the bile ducts).

A pancreas transplant is a surgery to place a healthy pancreas from a donor into a person with a diseased pancreas. A common reason for this type of damage is diabetes. Pancreas transplants can enable people with type I diabetes to give up insulin shots. An experimental procedure called islet cell transplantation transplants only the parts of the pancreas that make insulin. Immuno-suppressant is usually required to prevent transplant rejection.

It is the replacement of damaged or burnt skin in patients with a new skin of donors. Skin Transplantation is usually done to treat burn victims. An immunosuppressant is usually required to prevent transplant rejection.

Experimental approaches using monoclonal antibodies offer the possibility of specific immunosuppression. These antibodies may act by:

(a) Deleting the population of reactive cells—The use of antibodies directed against various surface molecules on the cells of immune system can successfully suppress T-cell activity. Depletion of T-cells to suppress graft rejection involves the use of monoclonal antibody to CD3 molecules of TCR complex. Injection of these antibodies causes rapid depletion of mature T-cells. The depletion is caused by the binding of AB coating T-cells to Fc receptor on phagocytic cells, which then phagocytose and deplete T-cells. In another example, Graft survival can be increased by using monoclonal antibodies specific for high-affinity IL-2 receptor. As IL-2 receptor expressed only on activated T-cells, exposed to Anti-CD 25 after graft specifically block proliferation of T-cells activated in response to alloantigens of graft. Difficulty with the using antibodies to prolong graft survival in human is that they are generally of non human origin.

(b) Inhibiting co-stimulatory signals leading to anergy in specifically reactive cells—T-cells activation requires interaction of TCR with its ligand and reaction of co-stimulatory receptors with their ligands. Contact between one of the co-stimulatory receptors CD28 on the T-cell and its ligand, B7 on APC, is blocked by reaction of B7 with soluble ligand CTLA-4lg. CTLA-4 is coupled to an IgH chain, which slows its clearance from the circulation. This process specifically suppresses graft rejection without inhibiting the immune response to other antigens.