Aging means any change associated with getting older, not necessarily deleterious (e.g. puberty). Senescence is a functional decline near the end of a lifespan. Most people use ‘aging’ as a synonym for senescence, implying deleterious change: an increased chance that an individual will die with time, or a decrease in an individual’s ability to withstand environmental insults. Aging could be seen as a loss of vitality, the ability to sustain life. Age-related changes are cumulative: death is sudden, but senescence involves a progressive increase in the probability of dying. Senescence is a fundamental, intrinsic property of all animals, and each species has a characteristic aging profile.

Time of death in an individual tells us little about the process of aging, but times of death in a population are instructive: the chances of death occurring in a given time will rise if aging is taking place. This gives a mortality distribution.

(1) Assume a hypothetical population born mature with no aging. Assume 20% die each year from accidents or predation. A survival curve of the number of survivors against years gives an exponential, hyperbolic curve. This would be seen in a population where individuals all die of predation or accidents before they age.

(2) Population which ages. Here the curve is rectangular (e.g. a human survival curve) and is characteristic of a population where individuals age.

(3) Wild populations: here an intermediate-type curve is often seen, as effects of aging and predation/accidents take their toll.

Death distributions can also be shown by plotting numbers of deaths against time; qx (the age-specific death-rate) can be calculated by dividing the number of individuals dying during each age interval by the number alive at the start of a given interval. In humans, qx rises increasingly after 70 years: it could be said to be a measure of the chances of dying at a given age. However, population studies cannot predict how aging will occur in a given individual.

Different anatomical and physiological indices can be measured and trends with aging demonstrated, although some indices (e.g. gray hair in humans) may not be directly attributable to aging and be extremely variable between individuals. Test batteries of several different indices are best measured. There does seem to be an increasing imprecision of homeostatic controls with aging:

for example blood glucose levels take longer to be restored to a set-point following a carbohydrate-rich meal. In humans, functions which show most change are those involving the co-ordinated activity of a number of organ systems: maximum breathing capacity falls by 50% between 20 and 90 years of age, whereas nerve conduction velocity falls by only 10%.

Point-in-time studies measure aging indices in individuals of different ages at a given time (e.g. human 30 year olds, 50 year olds, 70 year olds in 2003); the danger is that one can assume that changes in average values from one generation to the next represent what occurs in individuals. Samples tend to be selfprejudiced for aging in that older individuals are ‘fitter’ survivors: if a factor is measured whose deterioration leads to an increased chance of dying, samples of older individuals are composed of those in whom the factor has changed least. Environmental changes can affect survival; for example, older humans were subjected to harsher conditions in terms of hygiene, disease exposure, etc. when they were young.

Longitudinal studies measure individuals from birth to death, but logistical problems are considerable: a longitudinal study of a population of humans born in 1903 would not yet be complete. It should be noted that aging can, paradoxically, enhance survival: increased experience leads to more wisdom in avoiding hazards, immunological memory is enhanced, and decline in reproductive ability (e.g. after menopause in women, removing the dangers of childbirth) can increase vitality.

Tissues can be divided into three types.

Cultured cells will often divide a finite number of times. Lung fibroblasts divide about 50 times, whereafter the generation time between division increases, cell debris accumulates and eventually division ceases. This cessation is known as the Hayflick limit (after its discoverer) and it seems to be an intrinsic property of the cell clone itself. If old and young populations of cells are mixed, the old cells die while the young cells continue to divide, and adult lung cells enter a decline after fewer divisions than do fetal cells. Antioxidants (e.g. vitamin E, tocopherol) can increase the number of cell divisions, and it is significant that cancerous cell lines do not reach a Hayflick limit. (In vivo cells probably divide asynchronously, so that some earlier generation cells are always resting: thus gut cells can be renewed every day for 100 years in a human centenarian, clearly allowing far more time than might be predicted from the 50 or so synchronous divisions observed from in vitro studies.) 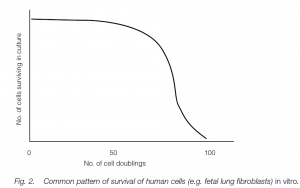