Theories of aging can be divided into those implying a genetic program and those implying that aging is environmentally determined: nature versus nurture.

Genetic theories note that as genes determine whether we are mice or humans, and mice live 2–4 years whereas humans live for more than 90 years, genes must play a role in determining lifespans. (There is a complex relationship which can be worked out between body size and brain size and average lifespan in different species, although there are exceptions, e.g. humans.) In favor of genetic theories for aging the following may be noted.

Environmental theories postulate that chance changes in molecules or organelles, or environmental insults, influence the course of aging. It has been noted that overcrowding seems to hasten the aging processes in many species of rodents, while dietary restriction (but not malnutrition) in young rats delays maturity, the onset of age-related diseases and death. Lack of excess food in youth may slow down a developmental clock and prevent obesity, which certainly hastens aging and death. Irradiation of fruit flies results in shifting of their survivorship curve to the left, suggesting that such irradiated flies senesce early. 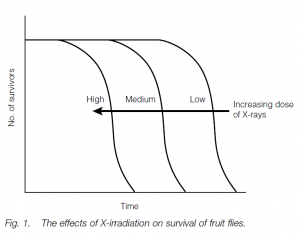 Many specific theories of aging are postulated. Some involve genetic, programed components, others chance or environmental factors, yet others mixtures of several contributory components. Most are not mutually exclusive.

Environmental insults such as ionizing radiation or chemical mutagens cause mutations in the cells’ genomes, leading to impaired cellular (and by a knockon effect) organism function. X-irradiation of Drosophila does shift the survivorship curve to the left; on the other hand, triploid frogs with one and a half times the normal amount of genetic material do not seem to age more quickly (or slowly), and persons exposed to high levels of ionizing radiation do not seem to age prematurely (although they do develop certain cancers).

The thymus involutes at puberty and the production of new T lymphocytes is impaired. T lymphocytes are responsible for many of the control and effector facets of immunity, and so there is a danger that the immune system becomes unbalanced and less capable of coping with infection. The self-censoring abilities of the immune system tend to break down in old age, leading to autoimmune conditions. This could lead to a state of ‘autoimmune decadence’ whereby the body’s immune system starts to destroy the body (10% of 20-year old humans and 88% of 80-year-olds have antinuclear autoantibodies). Autoimmunity does not explain aging processes in invertebrates which lack sophisticated adaptive immune systems.

Cross-linking between important skeletal molecules, observed during aging in collagen and elastin molecules, could impair biochemical and physiological cell efficiency.

These are chemical species with unpaired electrons in their outer orbitals and are transient intermediates in biochemical reactions; they can cause much damage to cell and organelle membranes. Many of the changes caused by free radicals are found in aging tissues; free radical scavengers such as vitamin E or hydrocortisone prolong the lives of cultured cells.

There are several related theories. In essence, they note that DNA codes for messenger RNA which codes for proteins. Nucleic acid polymerases are essential enzymes to facilitate synthesis/transcription of new DNA or RNA. If ‘errors’ occur in polymerase transcription or translation of polymerases this will result in erroneous DNA and RNA, leading to further errors by a process of positive feedback, until a ‘catastrophe’ occurs. The existence of ‘error-prone DNA polymerases’ has been postulated in aging tissues, and aging cells do seem to have less specific enzymes and other defects in protein synthetic machinery, but older cells seem to support viral replication perfectly well.

Many aging changes are ameliorated by repair processes, and aging cells seem less able to repair damaged DNA. Experiments show that the ability to repair DNA in cultured cells is related to the lifespan of the source species: humans are better repairers than are mice. In the disease xeroderma pigmentosum, ultraviolet radiation leads to fatal skin melanomas and other changes mimicking aging: this is related to a faulty DNA repair facility within the patients’ cells.

This theory (put forward by Strehler) postulates a programed decline in the repertoire of transfer RNA types within the cell during aging, progressively impairing translation at the ribosomes.

One of the most promising theories for aging involves telomeres. Telomeres are the physical ends of linear eukaryotic chromosomes. They are specialized nucleoprotein complexes involved in the protection, replication, and stabilization of chromosome ends. Telomeres usually contain lengths of tandemly repeated, simple DNA sequences (terminal repeats) composed of a guanine-rich strand and a cytosine-rich strand. These terminal repeats are highly conserved and all vertebrates appear to have the same sequence repeat in their telomeres – TTAGGG. Telomerase is the reverse transcriptase that controls the extension of the telomeric repeat sequences. If telomerase activity is reduced or absent (as seems to occur in aging), the telomeres will progressively shorten, leading to cell senescence. Eventually telomeric sequences can erode to the point where they are not long enough to support the telomere–protein complex protecting the chromosomal ends and the chromosomes become dysfunctional or even promote chromosome rearrangements contributing to neoplasms.

It is probably true to say that there is no single cause of aging and no single theory will fit all the facts. A gradual breakdown in homeostatic control (the result of chance and environmental factors such as somatic mutation, free radical attack, autoimmunity, and errors in protein and nucleic acid synthesis played out against a genetic background which may include elements of a ‘program’) may be the key factor.

There are a number of theories. The selection against genes which have a deleterious effect late in life is weak: individuals will have already passed the genes to their offspring. Such genes tend to accumulate and are not selected out: they express themselves, together, later in life. This phenomenon we see as aging, exacerbated by an inability to resist environmental damage. (It is suggested that there may be a selective advantage in having a post-reproductive population of women in society to look after children while younger women are producing more children: this could explain the evolution of the menopause in women.)

Kirkwood and Holliday postulated a ‘disposable soma’ theory in 1986: an individual’s energy must be divided between maintenance and reproduction. Too much maintenance of the body will avoid aging but results in too low a reproductive rate; too little maintenance leads to rapid aging and the individual will not survive long enough to produce many offspring. A balance between maintenance and reproduction must be struck. When the complex mathematics of the theory are worked through, the optimum balance allows the maximum number of offspring for a level of maintenance which delays but does not prevent senescence.