1. Basal body: It is composed of a central rod inserted into series of rings which is attached to the cytoplasmic membrane and cell wall.

In Gram-negative bacteria, two pairs of rings, the proximal ring, and the distal ring are connected by a central rod. There are two pairs of rings. The outer pair of rings, L-ring and P-ring are attached to the respective polysaccharides and peptidoglycan layer of the cell wall, and the inner pair of rings i.e. S-ring and M-ring are attached to the cell membrane. Four rings are the L-lipopolysaccharide ring, P-peptidoglycan ring, S-super membrane ring, and M-membrane ring.

L-ring: it is the outer ring present only in Gram-negative bacteria, it is anchored in the lipopolysaccharide layer.

P-ring: it is the second ring anchored in the peptidoglycan layer of the cell wall.

2. Hook: It is the wider region at the base of filament. It connects filament to the motor protein in the base. The length of the hook is longer in gram-positive bacteria than in gram-negative bacteria.

3. Filament: It is a thin hair-like structure that arises from a hook. 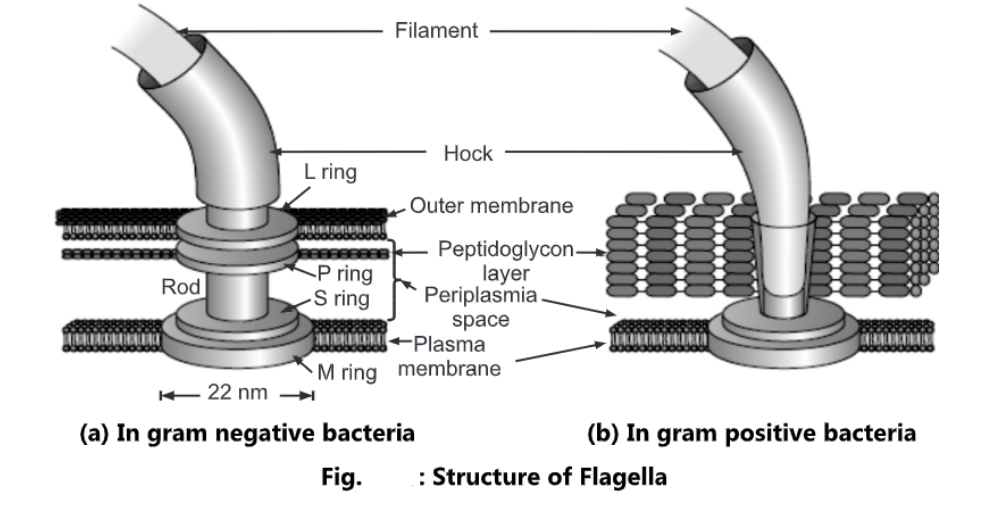 There are various types of flagellar arrangements:

1. Monotrichous: Presence of single flagella in one end of the cell. Examples: Vibrio cholera, Pseudomonas aeruginosa.

2. Lophotrichous: Presence of bundle of flagella in one end of the cell. Example: Pseudomonas fluorescence.

3. Amphitrichous: Presence of single or cluster of flagella at both ends of the cell. Example; Aquaspirillium.