The cell wall is the outermost covering of a cell, present adjacent to the cell membrane, which is also called the plasma membrane. The cell wall is present in all plant cells, fungi, bacteria, algae, and some archaea. An animal cell is irregular in their shape and this is mainly due to the lack of cell wall in their cells. There are many variations in the chemical composition of the cell wall in prokaryotes, but the basic fundamental structure is consistent in all microorganisms.

Bacterial cell walls are about 10-25 nm thick and account for about 20-30% of the dry weight of the cell.

Chemically the cell wall is composed of mucopeptide (Peptidoglycan or murein) framework formed by N-acetyl glucosamine and N-acetyl muramic acid molecules alternating in chains, which are cross-linked by peptide chains.

The cell wall of Gram-positive bacteria has a simpler chemical nature than those of Gram-negative bacteria.

The cell wall carries bacterial antigens that are important in virulence and immunity. 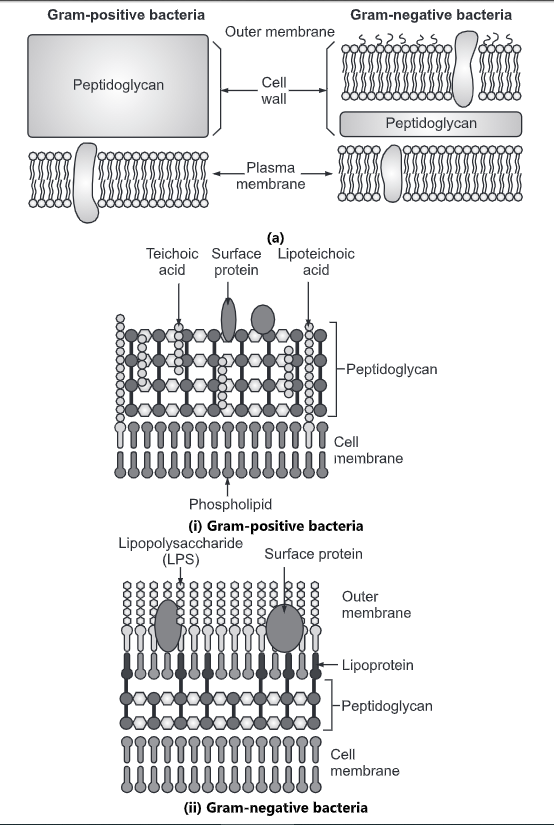 It is homogenous and thick, about 20 – 80 nm in thickness. It mainly consists of peptidoglycan, teichoic acids and sometimes other polysaccharides. Peptidoglycan accounts for about 90% of total dry weight of cell wall.

Cell wall of Gram-positive bacteria consists of the following layers:

1. Peptidoglycan layer: Peptidoglycan is a complex heteropolysaccharide porous cross-linked polymer which is responsible for strength of cell wall. This is thicker (15 – 80 nm) than that of Gram-negative bacteria (2 – 3 nm)

Peptidoglycan is composed of three components.

The amino acids found in tetra-peptide are: 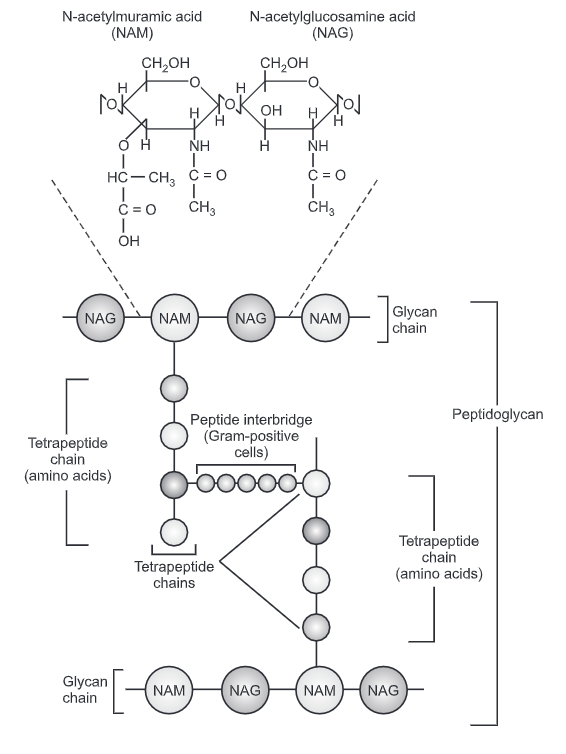 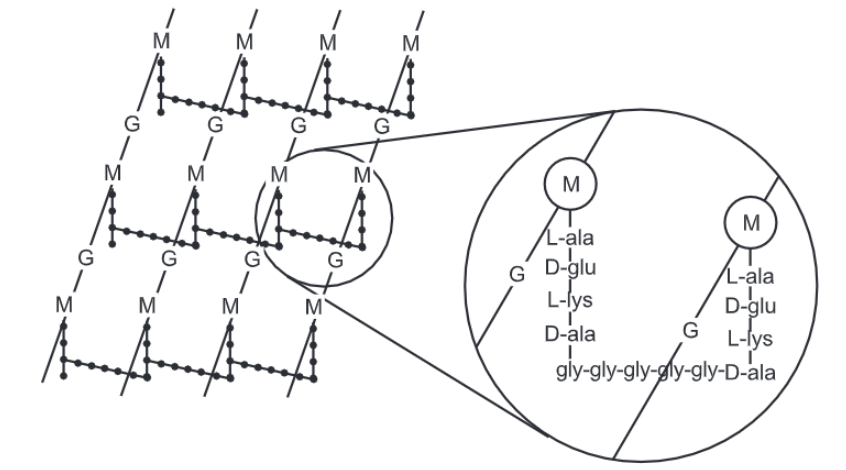 There are many variations in cross linking of different organisms. Based on this the classes of mureins are as follows:

(i) Group A: It shows pentaglycine bridge between Meso diaminopimelic acid of one tetrapeptide and D alanine of other.

(ii) Group B: It shows pentaglycine bridge between D glutamate of one tetrapeptide and D alanine of other.

(iii) Group C: It shows pentaglycine bridge between L lysine of one tetrapeptide and D alanine of other.

It is present in gram positive bacteria. It binds to protons and maintains the structure of cell wall. It binds with metal ions. It acts as receptors for many viruses. It constitutes about 50% of dry weight of cell wall. It is composed of lipid bilayer, protein and lipopolysaccharide (LPS) layer. 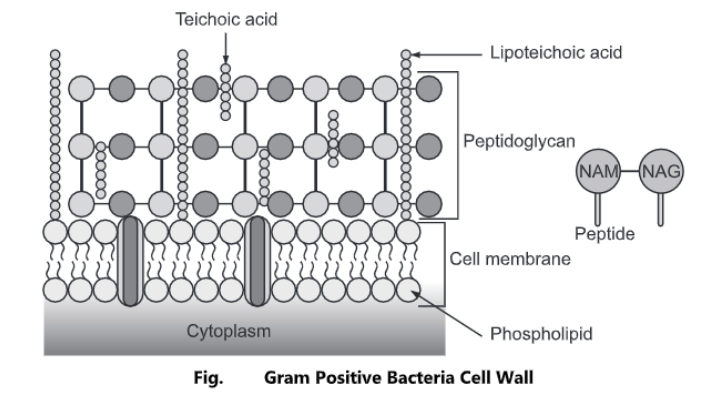 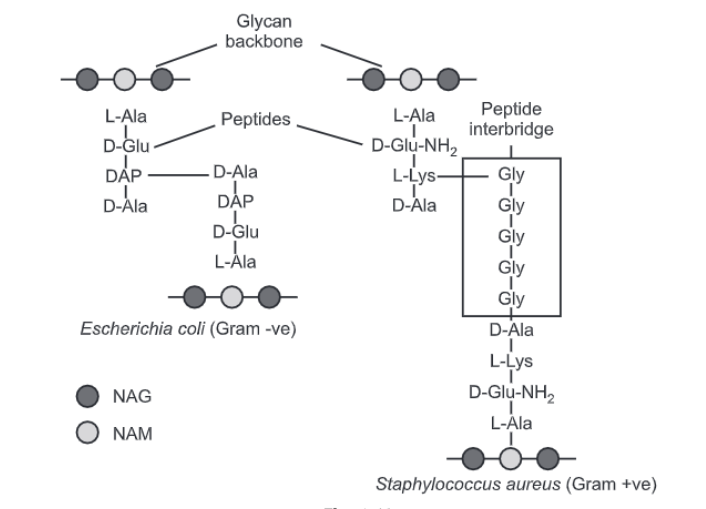 Cell wall of Gram-negative bacteria is very complex in structure.

It is composed of two layers:

1. Inner layer: It lies next to cell membrane and is very thin about 2 – 3 nm dimension. It contains peptidoglycan which accounts for 5 – 10% total dry weight of cell and forms a gel like structure. Inner later is separated from outer later by periplasmic space. The periplasm contains high concentration of degradative enzymes and transport proteins. Gram negative cell wall does not contain teichoic acid. Due to less percentage of peptidoglycan Gram negative cells are more susceptible to mechanical damage but less susceptible to lysozyme action.

2. Outer later: The outermost layer of Gram-negative bacteria cell wall is called the outer membrane, which contains various proteins known as outer membrane proteins (OMP). Porins are one of them which form transmembrane pores that serve as diffusion channels for small molecules. This is a bilayered membrane containing phospholipid molecules facing polar ends outside and non-polar ends inside the layer. It is in contact with peptidoglycan present in inner membrane through proteins. This layer contains proteins and lipopolysaccharides.

3. Lipopolysaccharides (LPS): LPS are involved in their endotoxin activity and antigenicity. It creates negative charge on the cell. The LPS consist of three regions:

i. Glycolipid portion (lipid A): This region contains glucosamine sugar. It is embedded in outer membrane and contains three fatty acid chains and phosphate or pyrophosphate moieties. It is responsible for the endotoxic activities like pyrogenicity, lethal effect, tissue necrosis, anticomplementary activity, B cell mitogenicity, immunoadjuvant property, antitumor activity etc.

iii. O-polysaccharide: This portion determines O antigen specificity. It is a short polysaccharide chain extending outside from core region. It contains galactose, mannose, rhamnose, fucose, xylose, ribose etc. This ‘O’ side chain shows variations in the composition in different organisms and thus is very specific. 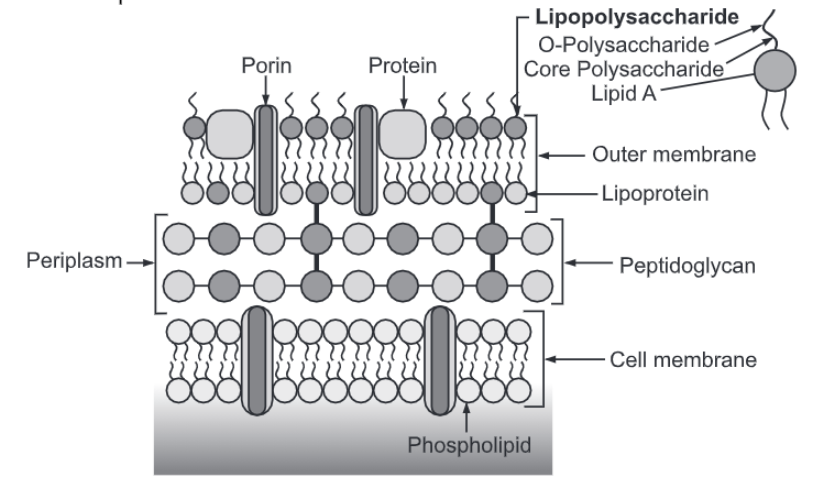 Functions of the Cell Wall:

2. It also provides protection against mechanical stress and physical shocks.

3. It plays an important role in cell division.

4. It helps to control cell expansion due to the intake of water.

5. It also helps in preventing water loss from the cell.

6. It is responsible for transporting substances between and across the cells.

7. It acts as a barrier between the interior cellular components and the external environment.

8. It protects the cell from toxic substances.

9. It enhances pathogenicity by making cell resistant to engulfment by macrophages.