The phenomenon of leaving off the colony by the queen and other members is known as swarming. It is taking place towards the end of spring or early summer but the true season is of swarming is still not well known. In the summers, when plenty of food is available and hive is overcrowded by the bees the queen leaves the hive on a fore-noon with some old drones and workers and establishes a new colony at some other place.

The migration of the complete colony from one place to another place due to some unfavourable conditions of life, such as destruction of the comb by termites or wax moths and scarcity of nectar producing flowers around the hive. This phenomenon is quite different from swarming. In such a case, the entire colony leaves the hive to find a new home elsewhere, absconding appears to serve one purpose only, that of removing the whole colony from an unfavourable situation or environment and if a chance of finding a more favourable place. The selection of the nest site is done by considering the following points: (1) Plenty of food available, (2) Protection from heat, rain, wind etc. (3) Distance from another hive (bees usually don’t select place nearer to another hive).

After swarming, the new virgin queen is followed by the drones in clear, sunny days is called nuptial flight. One of the drones start copulating with the queen in the sky and fertilizes the queen and dies during the course of copulation. The queen receives sperms and store them in spermatheca and reaches to the hive. This whole phenomenon is known as nuptial flight or marriage flight.

Honey bees have an unique and one of the best understood animal languages with which they inform each other about distance and direction of the source of food. 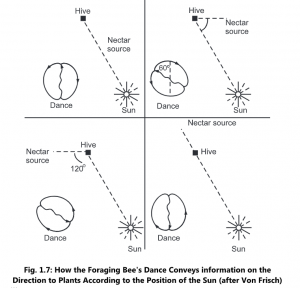