Meiosis is the type of cell division involved in the formation of sex cells, or gametes.In humans, this takes place in sex cells ie. testes and ovaries. Meiosis involves two stages of cell division that have some similarities to the phases in mitosis.

It is divided into 5 stages

Then it is followed by Cytokinesis  which divide the cell into two equal daughter cells as in mitosis.

Meiosis II occurs at approximately the same time in each of the haploid daughter cells.

During meiosis II, pairs of chromatids will separate and move to opposite poles. Note that, unlike with mitosis and meiosis I, there is no replication of chromosomes prior to meiosis II

It signifies the starting of the second meiotic division . The nuclear membrane dissolves at this point and the spindle fibres start to form.

It is signalled by the distribution around the equatorial plate of the chromosomes, each with two chromatids. The centromere remains held together by the chromatids.

It can be identified by the breaking of the attachment between the two chromatids and by their movement to the opposite poles. This stage ends when the nuclear membrane begins to form around the chromatids

The second nuclear division is completed during this process and then the second cytoplasm division occurs. Four haploid daughter cells from each meiotic division are formed. 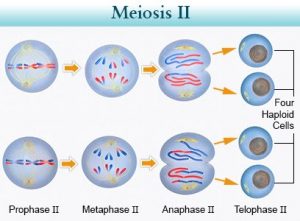 Total Number of chromosomes in meiosis is 23 in each daughter cell. Thus it is called Reductional division