Within the cytoplasm of prokaryotic cells are several kinds of reserve deposits, known as inclusions. Cells may accumulate certain nutrients when they are abundant and use them when the environment is deficient. Some inclusions are common to a wide variety of bacteria, whereas others are limited to a small number of species and therefore serve as the basis for identification.

Most bacteria do not live in environments that contain large amounts of nutrients at all times. To accommodate these transient levels of nutrients, bacteria contain several different methods of nutrient storage that are employed in times of plenty, for use in times of want. For example, many bacteria store excess carbon in the form of poly-hydroxy-alkanoates or glycogen. Some microbes store soluble nutrients, such as nitrate in vacuoles. Sulphur is most often stored as elemental granules which can be deposited either intra- or extracellularly. Sulphur granules are especially common in bacteria that use hydrogen sulphide as an electron source.

The inclusion bodies are tiny particles found freely suspended and floating within the cytoplasmic matrix. Therefore, also referred to as cytoplasmic inclusions. These cell inclusions are formed with decreasing pH and from the pool of soluble fusion proteins within the cell. They are the elementary bodies, formed during infectious diseases or within the virus-infected cells such as rabies, herpes, measles, etc.

Inclusion bodies are non-living chemical compounds and by-products of cellular metabolism. They are found both in prokaryotes and eukaryotes. There are a wide variety of inclusion bodies in different types of cells. In prokaryotic cells, they are mainly formed to store reserve materials. 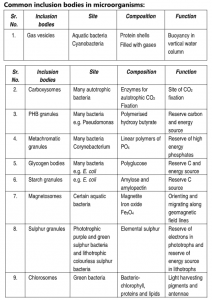 Hollow cavities found in many aquatic prokaryotes, cyanobacteria, anoxygenic photosynthetic bacteria, and halobacteria are called gas vacuoles. Each vacuole consists of rows of several individual gas vesicles, which are hollow cylinders covered by protein. Gas vesicles are aggregates of many hollow structures containing various gases. These are membrane-bound structures permeable to gases. Gas vesicles maintain buoyancy and allow floating property to bacteria so that the cells can remain at the depth in the water appropriate for them to receive enough amounts of oxygen, light, and nutrients. They make the cells lighter and are observed under a light microscope as dense refractile bodies.

Gas vesicles occur in five phyla of the Bacteria and two groups of the Archaea, but they are mostly restricted to planktonic microorganisms, in which they provide buoyancy. Gas vesicles are spindle-shaped structures found in some planktonic bacteria that provides buoyancy to these cells by decreasing their overall cell density. Positive buoyancy is needed to keep the cells in the upper reaches of the water column, so that they can continue to perform photosynthesis. They are made up of a shell of protein that has a highly hydrophobic inner surface, making it impermeable to water but permeable to most gases. Because the gas vesicle is a hollow cylinder, it is liable to collapse when the surrounding pressure becomes too great.

Gas vesicles provide bouyancy for planktonic bacteria by decreasing their overall cell density. There is a simple relationship between the diameter of the gas vesicle and pressure at which it will collapse — the wider the gas vesicle the weaker it becomes. However, wider gas vesicles are more efficient. They provide more buoyancy per unit of protein than narrow gas vesicles. Different species produce gas vesicles of different diameters, allowing them to colonize different depths of the water column fast growing, highly competitive species with wide gas vesicles in the topmost layers; slow growing, dark-adapted, species with strong narrow gas vesicles in the deeper layers. Gas vesicles are found in Enterobacterium, Serratia, cyanobacteria, heterotrophic bacteria, green sulphur bacteria like Thiospirillum, Thiocystis, Chromatium and Archaea.

Carboxysomes were first seen in 1956, in the cyanobacterium Phormidium uncinatum. They were first purified from Thiobacillus neapolitanus in 1973 and were shown to contain ribulose 1,5-diphosphate carboxylase (RuBisCo) held within a rigid outer covering. Photosynthetic bacteria use carbon dioxide as their sole source of carbon and require ribulose 1,5-diphosphate carboxylase enzyme for carbon dioxide fixation which is achieved by Calvin cycle. Among the bacteria containing carboxysomes are Nitrifying bacteria like Nitrobacter, Nitrococcus, autotrophic bacteria like Cyanobacteria, Thiobacillus and many chemotrophic bacteria that fix carbon dioxide.

They are proteinaceous polyhedral bodies with 80 – 140 nm diameter resembling phage heads in their morphology. These are bounded by a single-layered membrane. Carbaxysomes harbour the B12 -containing coenzyme glycerol dehydratase, the key enzyme of glycerol fermentation to 1,3-propanediol, in some Enterobacteriaceae, such as Salmonella.

A common lipid storage material is the polymer poly-B-hydroxybutyric acid (PHB) granules. PHB granules are non-nitrogenous organic storage granules found in bacteria Azotobacter, Bacillus cereus, Bacillus megaterium, Corynebacterium, Pseudomonas, Rhodospirillum, Spirillum, Cupriavidus necator, Methylobacterium rhodesianum etc. PHB was first isolated and characterized in 1925 by French scientist Maurice Lemoigne. These granules are deposited evenly in the cytoplasm and are detectable under a light microscope using Sudan black stain. They appear as refractile bodies of variable size. They can be extracted by organic solvents. They are formed in response to conditions of physiological stress like nitrogen or sometimes oxygen starvation and high availability of carbon. The polymer is primarily a product of carbon assimilation (from glucose or starch) and is employed by microorganisms as a form of energy storage molecule to be metabolized when other common energy sources are not available. Microbial biosynthesis of PHB starts with the condensation of two molecules of acetyl-CoA to give acetoacetyl-CoA which is subsequently reduced to hydroxy butyryl-CoA. This latter compound is then used as a monomer to polymerize PHB. So PHB is primarily a product of carbon assimilation and is used by micro-organisms as a form of energy storage molecules. They are thermoplastic polymers and are totally
biodegradable.

These granules are found in many organisms such as algae, fungi, bacteria and as well as protozoans. Metachromatic granules are large inclusion that stores inorganic phosphate that can be used in the synthesis of ATP. In these granules, linear chains of orthophosphate are joined to each other by ester bonds. They are also known as volutin granules. They are basophilic in nature and therefore stained by basic dyes. They show a metachromatic effect i.e. when these granules are stained with blue coloured basic dyes such as methylene blue, crystal violet, they appear red or brown due to interaction between dye and granules. It is generally formed by cells that grow in phosphate-rich environments. They are generally formed during the starvation of sulphur. Corynebacterium diphtheriae and Lactobacillus are a common example of bacteria possessing metachromatic granules. They are also found in the cytoplasm of Saccharomyces.

These are granules containing glycogen i.e. polymer containing 1-4 glycosidic linkages. They are distributed throughout the cytoplasm in high number. They have observed reddish-brown by staining with iodine. They are of size 20 – 100 nm and are formed under limited nitrogen supply but with ample carbon supply. They are found in Proteus, Klebsiella, Shigella, Bacillus, Salmonella, and in Cyanobacteria. The limited nitrogen supply lowers nucleic acid and protein synthesis which accumulates excess carbon. This carbon is stored in the form of glycogen bodies. For re-utilization of carbon, glycogen is degraded by phosphorylase enzyme.

Starch granules are the most important energy reserve in higher plants. They are composed principally of amylopectin (major fraction) and amylose (minor fraction). Their structure is assumed to consist of concentric shells of alternating hard, semi-crystalline, and soft amorphous layers. Production of insoluble Starch-Like Granules in Escherichia coli takes place by Modification of the Glycogen Synthesis Pathway. Starch granules are used as reserve food by the microorganisms

Magnetosomes are inclusions of iron oxide (Fe3O.), formed by several gram-negative bacteria such as Magnetospirillium magnetotacticum, that act like magnets. Bacteria may use magnetosomes to move downward until they reach a suitable attachment site. in-vitro, magnetosomes can decompose hydrogen peroxide, which forms in cells in the presence of oxygen. Therefore, magnetosomes may protect the cell against hydrogen peroxide accumulation.

Magnetosomes are intracellular organelles found in magnetotactic bacteria that allow them to sense and align themselves along a magnetic field (magnetotaxis). They contain 15 to 20 magnetite crystals that together act like a compass needle to orient magnetotactic bacteria in geomagnetic fields, thereby simplifying their search for their preferred microaerophilic environments. Each magnetite crystal within a magnetosome is surrounded by a lipid bilayer. Specific soluble and transmembrane proteins are sorted to the membrane. Recent research has shown that magnetosomes are invaginations of the inner membrane. Magnetite-bearing magnetosomes have also been found in eukaryotic magnetotactic algae, with each cell containing several thousand crystals. Magnetotactic bacteria usually mineralize either iron oxide magnetosomes, which contain crystals of magnetite (Fe3o4), or iron sulphide magnetosomes, which contain crystals of greigite (Fe3S4).

Magnetic interactions between the magnetosome crystals in a chain cause their magnetic dipole moments to orientate parallel to each other along the length of the chain. The magnetic dipole moment of the cell is usually large enough so that its interaction with Earth’s magnetic field overcomes thermal forces that tend to randomize the orientation of the cell in its aqueous surroundings. Magnetotactic bacteria also use aerotaxis, a response to changes in oxygen concentration that favours swimming toward a zone of optimal oxygen concentration. In lakes or oceans, the oxygen concentration is commonly dependent on depth. If the Earth’s magnetic field has a significant downward slant, the orientation along field lines aids the search for the optimal concentration. This process is called magneto-aerotaxis.

The “sulphur bacteria” that belong to the genus Thiobacillus – derive energy by oxidizing sulphur-containing compounds. These bacteria may deposit sulphur granules in the cell, where they serve as an energy reserve.

Chlorosomes were discovered in 1964 and described as rectangle bodies attached to the inner side of the cytoplasmic membrane in thin sections of cells from Chlorobium species. A chlorosome is a photosynthetic light-harvesting complex found in anoxygenic green bacteria, green sulphur bacteria (GSB) and some green filamentous anoxygenic phototrophs. Chlorosomes are flattened ellipsoidal organelles appressed to the cytoplasmic face of the cell membrane. They are composed of bacteriochlorophylls with some proteins, lipids, carotenoids and quinones. Proteins are confined to the surface of the chlorosome while most bacteriochlorophyll molecules are found within the interior where they assemble into aggregates. Green sulfur bacteria are a group of organisms that generally live in extremely low-light environments, such as at depths of 100 metres in the Black Sea. The ability to capture light energy and rapidly deliver it to where it needs to go is essential to these bacteria, some of which see only a few photons of light per chlorophyll per day. To achieve this, the bacteria contain chlorosome structures, which contain up to 250,000 chlorophyll molecules. Chlorosomes are ellipsoidal bodies, in Green Sulphur Bacteria their length varies from 100 to 200 nm, the width of 50 – 100 nm and height of 15 – 30 nm.

A unique property of chlorosomes is that their main pigments, bacteriochlorophylls (BChl) c, d or e, are organized in the form of an aggregate, in contrast to other photosynthetic light-harvesting complexes where proteins maintain the distances and mutual orientations between pigments. The aggregates inside a chlorosome are composed of many thousands of tightly associated BChl molecules making the chlorosome the largest light-harvesting complex known to date. The aggregation also leads to strong excitonic coupling between the BCh is which provides the basis for high light-harvesting efficiency. Consequently, some of the chlorosome-possessing bacteria can grow under extremely low light conditions and chlorosomes are considered the most efficient antenna found in nature.

Bacteria that contain chlorosomes include: