In many fermentation processes, chromatographic techniques are used to isolate and purify relatively low conc. of metabolic products. Chromatography is the science which studies the separation of molecules based on the differences in their shape, size structure, and/or composition.

In general, it is a technique by which the components in a sample, carried by the liquid or gaseous phase, are resolved by sorption-desorption steps on the stationary phase.

The most commonly used of these techniques is liquid chromatography, it is very versatile and is used to separate a wide variety of compounds ranging from small organic molecules to important biopharmaceuticals including enzymes, nucleic acids, carbohydrates, fats, vitamins, and more.

It is similar to paper chromatography. The adsorbent (e.g. Silica gel G) spread over a glass or plastic plate in a form of thin layer. The sample is spotted on to this layer at one end. The plate is dipped into a jar containing solvent system. After running of solvent system, remove the plate, air dry and detect the components by various methods.

Detection- Can be done by following formula

1) It helps to study of ripening and fermentation products.

3) This technique is useful in the detection of drug-like antibiotics.

4) It is used to check purity of chemical compounds.

5) Also used in detection of adulterants in food and drinks.

6) Use to separate various pigments.

Separation in ion-exchange chromatography depends upon the reversible adsorption of charged solute molecules to immobilized ion exchange groups of opposite charge. Ion exchange

Separations are carried out usually in columns packed with an ion exchanger. Jon exchanger can be divided into two groups-

Ion exchange chromatography involves the separation of ionic and polar analytes using chromatographic supports with ionic functional groups that have charges opposite that of the analyte ions. The analyte ions and similarly charged ions of the eluent compete to bind to the oppositely charged ionic functional group on the surface of the stationary phase. Assuming that the exchanging ions (analytes and ions in the mobile phase) are cation, the competition can be explained using the following equation:

In this process, the cation M_ of the effluent is replaced with the analyte cation C bound to the anion X which is fixed on the surface of the chromatographic support (S). In anion exchange chromatography, the exchanging ions are anions and the equation is represented as follow –

Molecules vary considerably in their charge properties and will exhibit different degrees of interaction with charged chromatography support according to differences in their overall charge, charge density, and surface charge distribution. Net surface charge of all molecules with ionizable groups is highly pH-dependent. Therefore pH of the mobile phase should be selected according to the net charge on a protein of interest within a mixture is opposite to that of matrix functional group, that it will displace the functional group counter ion and bind the matrix. On the other hand oppositely charged proteins will not be retained. Adsorbed protein analytes can be eluted by changing the mobile phase pH which effect the net charge of adsorbed protein, so its matrix binding capacity. Moreover increasing the concentration of a similarly charged species within the mobile phase can be resulted in the elution of bound proteins.

Applications — Ion exchange chromatography has been extensively used for –

2) Determination of base composition of nucleic acid.

3) Separation of mixture of nucleotides.

7) Separation of many vitamins, other biological amines, organic acids and bases.

8) As effective and fast method of water purification.

9) This chromatography is one of the most important adsorption techniques used in the separation of peptides, proteins, nucleic acids and related biopolymers which are charged molecules in different molecular sizes and molecular nature.

Separation is based on the binding affinity of biomolecules with their respective biologically active ligands (this ligand is bonded covalently to the solid matrix) which interacts with its analyte as a reversible complex that can be eluted by changing buffer or by addition of a competitive ligand. Affinity chromatography media are commonly used for applications such as purification of fusion proteins, mono- and polyclonal antibodies, and glycoproteins.

This chromatography relies on isolating the desired protein from a mixed solution through the protein’s specific binding affinity to ligands mounted in a gel matrix through which the protein mixture is allowed to run.

1) Bonding of ligand to Sepharose matrix results in immobilized ligand-matrix.

2) Sample mixture is added to gel column. Complimentary proteins bind to ligand-matrix complex, while the non-binding impurities are washed out.

3) In order to remove the bound proteins and retrieve them from the gel, a stronger second wash is run through. Your favorite protein is then washed out. 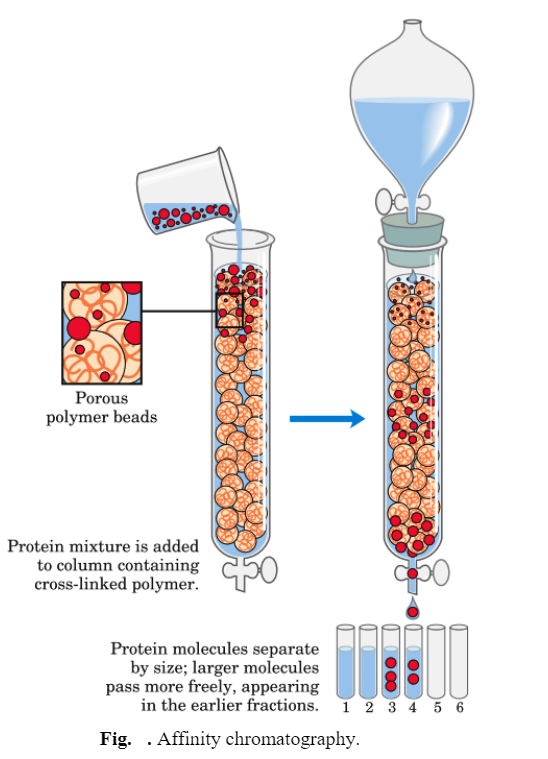 1) Affinity chromatography can be used for purification of enzymes and other proteins, including receptor proteins and immune globulins.

2) Affinity chromatography has application in separation and quantitation of glycosylated

3) Immobilized single-stranded DNA can be used to isolate complementary RNA and DNA.

4) Affinity chromatography has the application in separation of amino-acyl-ribonucleic acid synthetase I on (RNA conjugate of sepharose matrix.

Size exclusion chromatography is also called gel filtration; it is a method that separates molecules according to their size and shape. The separation of the components in the sample mixture is based on their molecular weight, shape and size. Gel filtration can be used as an analytical method to determine the molecular weight of an uncharacterized molecule. Gel filtration is also an important preparative technique in the purification of proteins, polysaccharides and nucleic acids.

The stationary phase consists of porous glass granules or gel particle which is in equilibrium with mobile phase. Molecules of large size are completely excluded from the pores. They have access only to the mobile phase between the beads and, therefore, elute first, while, molecules of intermediate size are partially included. They can fit inside some but not all of the pores in the beads. These molecules elute between the large (excluded) and small (totally included) molecules. However, molecules of small size are completely included. They get distributed between the mobile phase inside and outside the molecular sieve and elute last in a gel filtration separation.

1) Size exclusion chromatography is mainly used for purification of biomolecules such as proteins, peptides, and hormones, antibodies, polysaccharides on the basis of size.

2) Other than purification, this technique can also be used for determination of relative molecular mass.

3) Solutions of high molecular mass can be desalted by using column of Sephadex G-25.

4) Exclusion chromatography has also been used to study the protein-ligand binding.

5) The method especially useful for the separation of 4s and 5s tRNA.