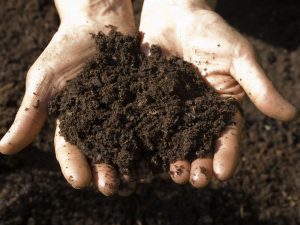 1. Laterization. Laterite (L. latus=brick) soils are reddish brown in colour and are found in the warm and humid (=heavy rainfall) tropics. In the process of laterization, iron and aluminium oxides which are resistant to decomposition, do not leach down but remain in the surface soil. Silicic acid (i.e., colloidal form of silica) on the other hand leaches to lower horizons. Laterites are comparatively less fertile soils and are found in Australia, India, some warm parts of Europe and North America.

Lotsol is a wider term than laterite and currently used to refer to soils of warm humid belt of the earth where silica usually leaches to lower horizons while oxides of iron and aluminium remain on the surface. Lotosol soil is also called oxide and ferrasol and is poor in bases and contains low organic content. It is rich in free quartz grains and kaolinite clays.

Vertisols are the other characteristic soils where there is a long dry season. These soils are formed from limestones, marl or ferromagnesium rocks and rich in montmorillonite clays. During dry summer, deep cracks are formed in vertisols and these cracks get filled with clay due to dust blow which in the rainy season on wetting swells so much as to form small bumps. Thus, vertisols are characterized by cracks in summer and bumps in rains.

2.Podsolization. It is the most actively studied soil forming process. It takes place in cold humid climate under forest vegetation (chiefly of genera of Ericaceae and conifers) where leaf litter and other organic matter decompose slowly, chiefly through fungal activity. Litter contains high lignin and low nutrient (particularly calcium) contents; it is also rich in phenolic compounds which inhibit microbial activities. In consequence, such a litter is acidic in nature. The water percolating through such litter, being acidic dissolves out with it minerals and humus contents (such as carbonates, sulphates and iron and aluminium compounds) from A-horizon of soil. These leached materials reach to the lower horizons, being collected in the form of a hard, distinct layer in the B-horizon. Leaching results into a grey ash- like surface called podsol (Russian pod = under, zole = ash). In the Indian conifer forests of the Himalayas true podosols are not met with, mainly due to alternate phases of wet and dry seasons.

3.Gleization. In humid climates, due to high ground level or retention of surface water in the soil, water-logging and consequent reducing conditions are fairly common. Under such reduced conditions firstly due to ferrous compounds, the soil colour becomes blue-grey or grey, and secondly the rates of decomposition of the organic matter are slow. These together result into the accumulation of a sticky compact layer of blue-grey colour at the bottom of B horizon. This process in called gleization and the soil as gleys. Gleization also takes place in ice covered regions of arctics (also tundra) where soil is not saline.

4.Melanization. The process is very common in regions of low humidity where humus is formed from the organic matter. As a result of melanization, the black humus along with water is mixed in the A-horizon of the soil which turn dark-coloured. Such a blackish brown top soil is called chernozem and it has a minimum leaching, so it is rich in organic detritus.

5.Calcification. It is a common process found in North India, where calcium in the form of calcium bicarbonate dissolves in water and leaches down escaping adsorption around dry particles. The leached CaCO3 gets precipitated at the depths of about half to three metres, depending on the quantity of rainfall and depth of infiltration. The precipitated calcium remains in the form of nodules or kankar and form a hard pan. This gradually reduces soil fertility. In the Northern India the kankar nodules are unearthed and are used in the building of roads and in the preparation of lime. Calcification is typical of grassland and a layer of calcium carbonate generally occurs at the base of B horizon. Sometimes, a layer of more soluble calcium sulphate (gypsum) is also present. There are some other types of soils such as a hydromorphic, halomorphic and azonal.

Hydromorphic soils are formed on poorly drained water filled regions with poor aeration, i.e., they are highly reducing soils in which ferric ions are reduced to ferrous. But in dry seasons the soil becomes aerated and ferrous is again converted into ferric. The hydromorphic soils of tropical paddy fields are called grey soil. Halomorphic soils are characterized by the presence of high salt contents on the surface. Salinity and alkalinity are commonly found in big patches in the North Indian states resulting into the formation of usar or reh soils. In fact, such soils result due to upward capillary movement of dissolved salts from the rising water table in too frequently irrigated and fertilized regions, or from nutrient rich water received through stream flow from the surroundings during the periods of high rainfall. On evaporation, salts in different forms are left on the surface. Grazing animals often lick such salt deposits to fulfil their metabolic needs. Azonal soils lack horizon B and the horizon A is also thin. Among azonal soils, the common are lithosols found on mountain tops where parent rock is quite hard and resistant to weathering. Regosols are formed from volcanic deposits.