Algae (singular alga, Latin for “seaweed”) are a large and diverse group of simple. typically autotrophic organisms, ranging from unicellular to multicellular forms. Most are photosynthetic like plants. and “simple” because their tissues are not organized into the many distinct organs found in plants. The largest and most complex marine forms are called seaweeds.

The term algae are now restricted to eukaryotic organisms. All true algae, therefore. have a  nucleus enclosed within a membrane and plastids bound in one or more membranes.

Algae lack the various structures that characterize plants. such as phyllids (leaves) and rhizoids in nonvascular plants, or leaves. roots. and other organs that are found in vascular plants. Many are phototrophic, although some groups contain members that are mixotrophic, deriving energy both from photosynthesis and uptake of organic carbon either by osmotrophy, myzotrophy, or phagotrophy. Some unicellular species rely entirely on external energy sources and have limited or no photosynthetic apparatus.

Occurrence – Algae are prominent in water bodies, common in terrestrial environments, and are found in unusual environments, like on snow and on ice. Seaweeds grow mostly in shallow marine waters. 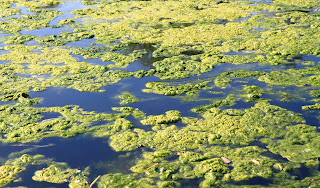 The various sorts of algae play significant roles in aquatic ecology. Microscopic forms that live suspended in the water column (phytoplankton) provide the food base for most marine food chains.

In very high densities (algal blooms) these algae may discolor the water and outcompete. poison. or asphyxiate other life forms.

a) Source of Agar – Agar, a gelatinous substance derived from red algae, has a number of commercial uses. It is used as a solidifying agent in the culture medium for bacteria.

b) Source of alginates – Macrocystis are harvested annually in for alginate extraction and abalone feed.

c) Energy source – Algae-based fuels like Hydrogen hold great promise and are directly related to the potential to produce more biomass per unit area in a year than any other form of biomass.

e) Source of nutrition – Naturally growing seaweeds provide many vitamins including A, B1, B2 , B6 , niacin, and C, and are rich in iodine, potassium, iron, magnesium, and calcium. In addition, commercially cultivated microalgae, including both algae and cyanobacteria, are marketed as nutritional supplements, such as Spirtulina, Chlorella and the Vitamin-C supplement, Dunaliella, high in beta-carotene.

f) Pollution control – Sewage can be treated with algae, reducing the need for greater amounts of toxic chemicals that are already used. Aquariums and ponds can be filtered using algae, which absorb nutrients from the water in a device called an algae scrubber, also known as an “ATS” algal turf scrubber.

g) Source of pigments – The natural pigments produced by algae can be used as an alternative to chemical dyes and coloring agents.

h) Stabilizing substances – Carrageenan, from the red alga Chondrus crispus, is used as a stabilizer in milk products.

i) Plastics – Algae has been implemented in the production of biodegradable plastics.