When vegetative cells of certain bacteria such as Bacillus spp. (aerobic, facultative anaerobic) and Clostridium spp. (anaerobic) are subjected to environmental stresses such as nutrient deprivation, they produce metabolically inactive or dormant form-endospore. The formation of endospore evade the problems associated with environmental stress and helps them to survive.

The calcium salt of dipicolinic acid (DPA 10 – 15%) is a major constituent of bacterial spores. It is absent in the vegetative cell and is released during spore germination.

Primary dye malachite green bind relatively weakly to the cell wall and spore wall. After washing with water, dye come out of cell wall however not from spore wall once the dye is locked in. The addition of a counterstain or secondary stain (Safranine) is used to stain the decolorized vegetative cells. Therefore, vegetative cells appear pink and endospores appears green in colour.

1. Prepare smears of organisms to be tested for presence of endospores on a clean and grease free glass slide and air dry it.

3. Place a small piece of blotting paper (absorbent paper) over the smear and place the slide (smear side up) on a wire gauze on a ring stand.

4. Heat the slide gently till it starts to evaporate (either by putting the slide on a staining rack that has been placed over a boiling water bath or via Bunsen burner).

5. Remove heat and reheat the slide as needed to keep the slide steaming for about 3-5 minutes. As the paper begins to dry add a drop or two of malachite green to keep it moist, but don’t add so much at one time that the temperature is appreciably reduced.

6. After 5 minutes carefully remove the slide from the rack using a clothes pin.

7. Remove the blotting paper and allow the slide to cool to room temperature for 2 minutes.

8. Rinse the slide thoroughly with tap water (to wash the malachite green from both sides of the microscope slide).

9. Stain the smear with Safranine for 2 minutes.

10. Rinse both sides of the slide to remove the secondary stain and blot the slide or air dry. 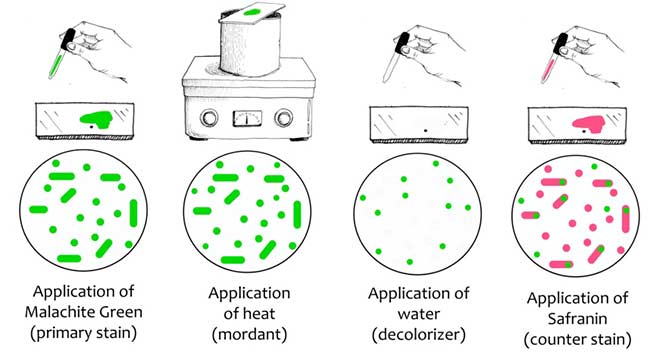 1. In this staining process, 2 – 3 ml broth culture of microorganism and equal volume of Basic fuchsin are heated in a water bath at 100°C for 10 minutes. The extensive boiling softens the structure of the bacterial spores and the basic fuchsin gets into the spores.

2. After the boiling process, the microbial culture-basic fuchsin stain is cool for some time which hardens the outer covering of the spore.

3. In order to give a colour to the background and to differentiate between the vegetative cells and endospores, a thin film of loopful of the microbial culture-basic fuchsin stain is prepared and 2 drops of nigrosine are added on a clean glass slide. Since nigrosine is negatively charged, the bacterial cells cannot take up nigrosine.

After staining the vegetative cells appear become colourless, the endospores stains as red which can be present as terminal or sub-terminal. The background is stained as dark by the Nigrosine stain.