Spores are unicellular structures. They are highly resistant, dormant metabolically inactive resting structures formed in response to adverse environmental conditions such as lack of nutrients, environmental stress etc. Spore is a refractile body formed by a vegetative mother cell. They do not have a role in reproduction. Vegetative cells of endospore-forming bacteria begin sporulation when a key nutrient, such as the carbon or nitrogen source, becomes scarce or unavailable. Endospores are highly durable dehydrated cells with thick walls and additional layers. Endospores enable bacteria to lie dormant for extended periods, even centuries. There are many reports of spores remaining viable over 10,000 years.

There are two types of spores:

a. Endospores- Form inside the vegetative cell.

b. Exospores – Form in either one of the ends of the vegetative cell.

The diameter of the endospore may be the same as, smaller than, or larger than the diameter of vegetative cell. Depending on species, the endospore might be located terminally (at one end), sub- terminally (near one end), or centrally inside the vegetative cell. Bacteria show central bulging or non-bulging spores. These are highly resistant to chemical disinfectants, low or high temperature as well as radiations. Sporulating bacteria includes Bacillus subtilis, Bacillus polymyxa, Bacillus licheniformis, Clostridium, Sporolactobaciltus, Thermoactinomycetes. 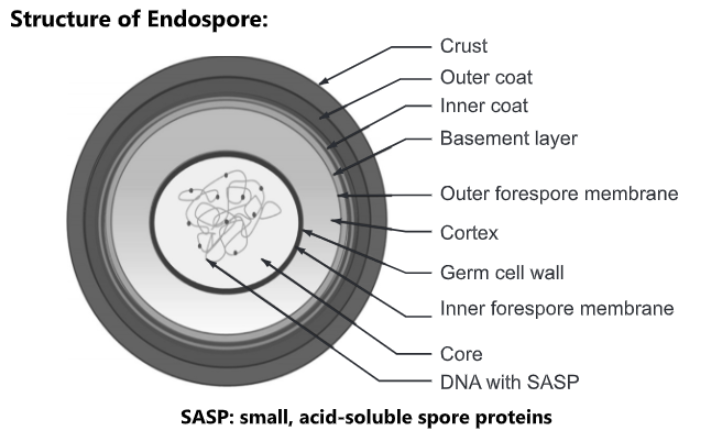 1. Core/Protoplast: The core is the spore protoplast. It contains a complete nucleus (chromosome), all the components of the protein-synthesizing apparatus including ribosomes, and an energy-generating system based on glycolysis. Several unique enzymes are formed (e.g., dipicolinic acid synthetase). Spores contain no ATP. The energy for germination is stored as 3-phosphoglycerate rather than as ATP. It takes up large amount of Ca ions which chelates with dipicolinic acid to form Calcium dipicolinate.

3. Cortex: The cortex is the thickest layer of the spore envelope, accounts for half volume of spore. It has inner and outer cortex membrane. It contains modified form of peptidoglycan. Cortex peptidoglycan makes the spore resistant.

4. Coat: Around the cortex a layer of spore coat is present which contains proteins with high percentage of cysteine, keratin and hydrophobic amino acids. Spore coat contains two layers inner and outer coat. The impermeability of this layer gives spores their relative resistance to antibacterial chemical agents.

5. Exosporium: In some bacteria outer loose envelope surrounds endospore known as exosporium. The exosporium is a lipoprotein membrane containing some carbohydrates.

The process of endospore formation within a vegetative cell takes several hours and is known as sporulation or sporogenesis.

Bacteria remains dormant by forming spores for years. This dormancy may be retained for years but this condition may be broken up due to change in the environmental conditions. Under favourable conditions each endospore germinates to give rise to a vegetative cell. Transformation of dormant spore into vegetative cell is called as germination.
The germination process occurs in three stages: activation, initiation, and outgrowth.

Endospores are important from clinical viewpoint and in the food industry because they are resistant to process that normally kill vegetative cells. Such processes include heating, freezing, desiccation, use of chemicals and radiation. Most vegetative cells are killed by temperatures above 70°C, endospores can survive in boiling water for several hours or more. Endospores of thermophilic bacteria can survive in boiling water for 19 hours. 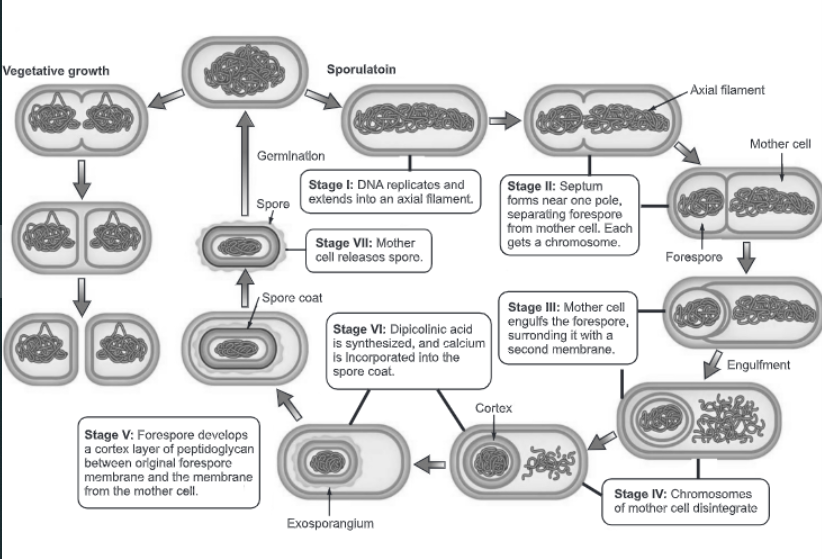