Enzymes are biological catalyst. A catalyst is defined as a substance that increases the rate of the reaction without itself undergoing any change in the overall process. The word enzyme was coined by Kuhne in 1878 from a Greek term meaning yeast.

Enzymes are defined as biological catalysts produced by living cells which catalyze a particular reaction or a group of closely related reactions.

The true nature of the enzyme was established by James Sumner in 1926. He extracted and purified an enzyme urease from jack beans and determined its chemical nature and composition All enzymes discovered are protein in nature except an RNA enzyme called ribozyme which has its own catalytic activity. Enzymes have a three-dimensional structure and organic in nature. All enzymes are initially produced in a cell. Based on the site of action enzymes are of two types

They synthesize cellular material and perform metabolic reactions which provide the energy required by the cell.

Enzymes are protein in nature. Proteins are made up of amino acids joined end to end to form long chains of polymeric protein molecules. Twenty natural amino acids are known to constitute enzymes of protein molecules. The carbon atom which harbors carbonyl and amino group is referred to as “alpha carbon” and each group may be called accordingly as alpha carbonyl or alfa amino group. A peptide bond is formed between alfa carbonyl of one amino acid and alfa amino of the others. Peptide bond constitutes the backbone. In any protein, such a long chain of amino acid is by no means inert. The residual R group plays a vital role in the folding of a polypeptide chain and is responsible for proteins three-dimensional structure in aqueous solution. The r group can be acidic basic or neutral. Thus they are responsible for certain properties of enzyme proteins. These groups can make enzymes have a particular shape, imparts net positive or negative charge and they may be responsible for its solubility and mobility in aqueous solutions. The interactions of R group are non-covalent and therefore they tend to be weak

Enzymes are the largest and most specialized class of protein molecules. They are of two types- simple enzymes and holoenzymes or conjugated enzymes

1) Simple enzymes- Some enzymes are simple enzymes entirely made up of only proteins i.e. on hydrolysis they yield amino acids only. Digestive enzymes such as pepsin trypsin and chymotrypsin are of this nature.

2) Holoenzymes or conjugated enzymes- Many enzymes possess chemical groups that are non-amino acids in nature along with proteinic components. These conjugated proteins are called holoenzymes. A holoenzyme may be associated with a protein component, termed the apoenzymes and a non -protein moiety like a cofactor. Cofactor may be divided into three groups which include prosthetic groups coenzymes and metal activators.

A coenzyme is a small heat-stable dialyzable organic molecule which readily dissociates off an enzyme protein. Thus NAD and NADP, thiamine pyrophosphates are examples of coenzyme. Coenzymes act as donors or acceptors of groups of atoms which have been added or eliminated from the substrates.

An enzyme may contain only amino acids and a metal e.g. Ascorbic acid oxidase is enzyme having copper tightly bound and is not separated readily from the protein apoenzyme. Many other enzymes require metal ions for their activation. The ions of Zn+2, Mn+2, Fe+2, K+2, Na+2, Mg+2 and Ca+2 are known to participate in the enzymatic reaction.

1) Chemical nature of enzyme – Chemically, all enzymes are protein in nature. The only exception 1s an RNA enzyme called ribozyme, which has its own catalytic activity and organic in nature.

2) All enzymes are initially produced in the cell, but on the basis of site of action, enzymes are-

3) Intracellular enzymes – Enzymes which carry out metabolic reactions within the cell.

4) Extracellular enzymes – Enzymes which are secreted outside by the cell and catalyzes reactions in the vicinity of the cell.

5) Enzyme components: Based on the composition, enzymes are-

The holoenzyme may be divided into a protein component termed as ‘apoenzyme and a non-protein moiety the ‘cofactor’.
Cofactor again divided into:
6) Reversibility of enzyme action – Most of the enzymes exhibit reversibility of their action. This property is very helpful in metabolism. Example. Phosphorylase.
Glycogen <—> Glucose + Phosphate.
7) Remain unaltered in the end – One of the primary characteristics of the enzyme is their emergence from a set of reactions in an unaltered state and remain unaffected in a given reaction.
8) Required in small quantities – Enzymes are required in very small concentrations to carry out the reactions. It has been estimated that a single enzyme 1.e. carbonic anhydrase can act upon the highest number of 6,00,000 substrate molecules per minute. This value is referred to as tum over number.
9) High catalytic efficiency – The striking characteristic of an enzyme is its high catalytic efficiency. Example One ounce of pure crystalline pepsin can digest nearly two tons of egg white in only a few hours.
10) Lowers the activation energy – Enzyme increases the rate of biochemical reaction by lowering the activation energy.
11) Accelerate the rate of reactions without altering the chemical equilibrium – Enzymes increases or accelerate the rate of a reaction without altering the chemical equilibrium of that reaction. The reactions will proceed at a faster rate in the presence of enzymes but the equilibrium between the substrate and the product will remain constant.
12) The specificity of enzymes – There are four different types of specificity

IUB Classification and Nomenclature of enzymes

Initially, enzymes were known by their common names obtained by adding the suffix *-use’ to the name of the substrate or to the reaction that they catalyze. Ex. Protease acts on proteins, a lipase acts on lipids, nuclease acts on nucleic acids. These are the trivial names of the enzymes, which are unable to give complete information about the type of reaction and some important details of the reaction.
Hence, in 1972 the International Union of Biochemistry (IUB) adopted a unique nomenclature, which is not only retained the trivial name of many enzymes but also recommended systemic names. The IUB has recognized six major classes of enzymes on the basis of reactions catalyzed by them.
A four-digit enzyme commission (EC) number is assigned to each enzyme representing the class (1st digit), sub-class (2nd class), sub-subclass (3rd digit) and individual enzyme name (4th digit).
Example- Lactate dehydrogenase is an oxidoreductase which is written as EC 1.1.1.27 according to systemic nomenclature along with its trivial name.
For a long time the normal practice has been to name on the basis of the nature of the reaction and the specific substrate involved e.g. maltase is an enzyme which hydrolyzes maltose. Similarly, glutamate dehydrogenase is an enzyme which indicates the removal of hydrogen from glutamic acid. Some enzymes have been known for their common usage, such as pepsin, trypsin, etc.
The International Union of biochemistry in 1972, adopted a unique nomenclature, which not only retained trivial names of many enzymes but also systematic names. IUBMB has recognized six major classes of enzymes on the basis of reactions catalyzed by them. Each is further subdivided into sub-class, sub-subclass, and then the individual enzyme within the sub-sub group. Thus each enzyme is designated by four numbers lactate dehydrogenase is an oxidoreductase which is written as EC 1.1.1.27 according to systematic nomenclature, along with its trivial name.
1. Oxidoreductase – Enzymes belong to this class catalyzes biological oxidation-reduction reaction in which one compound is oxidized and another is reduced. Oxidation involves removal of hydrogen atoms or an electron or oxygen atom from a donor to a common acceptor such enzymes are known as dehydrogenase.
a) Major sub-classes are:
b) Dehydrogenases
c) Oxidases
d) Oxygenases
e) Oxidative deaminases
f) Hydroxylases
g) Peroxidases
2. Transferases- These are enzymes which catalyze the transfer of chemical groups such as alkyl, methyl, carboxyl, aminoacyl, sulfate, aldehyde ketone, glycosyl, phosphate group, etc. from donor to acceptor. Mayor sub-classes are as follows
a) Aminotransferase
b) Kinases
c) Acetyl transferases
d) Glycosyl transferases
3. Hydrolases- These includes hydrolytic enzymes that split C-O, C-N, C-C, and other bonds by addition of water. These include esterases, Lipases, glycosidases, peptidases, phosphatases, etc.
a) Esterases
b)  Lipases
c) Glycosidases
d) Peptidases
e) Phosphatases
4. Lyases – These are the group of enzymes which catalyzes the removal of specific groups from their substrate and introduce double bonds The same enzymes can add groups to the double bonds Important examples are aldoses, decarboxylases, dehydratases, aconitases, etc.
a) Aldolases
b) Decarboxylases
c) Dehydratases
d) Aconitases
5. Isomerases – are a group of enzymes which catalyzes redistribution of chemical groups within a molecule and produce isomers epimers, important examples are isomerases, epimerases, racemases, and intermolecular transferases.
Major sub-classes are:
a) Isomerases
b) Epimerases
c) Racemases
d) Intramolecular transferases
6. Ligases – They are also called synthetases which catalyzes the joining together of two molecules coupled with the breakdown of phosphate bonds in ATP or any nucleoside triphosphates. Examples include synthetases, carboxylase. etc.
Major sub-classes are:
a) Synthetases
b) Carboxylases 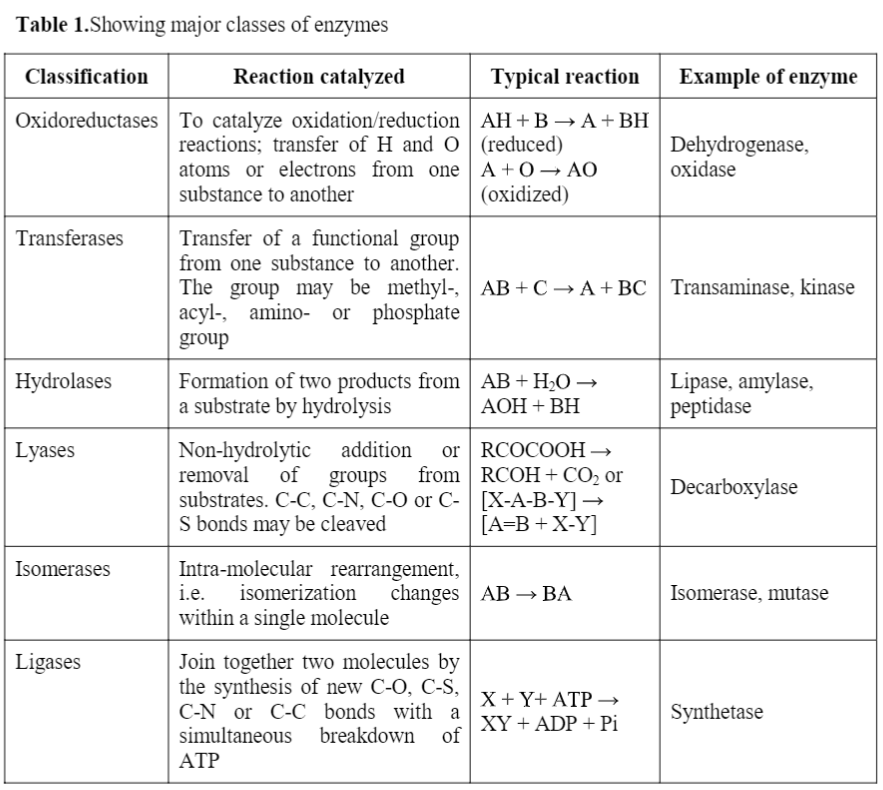