If a swimming animal is heavier than water, part of its energy is expended in keeping afloat and only part for forwarding locomotion. If an animal has neutral buoyancy (i.e. the density, ρ, of the animal = the density, ρ, of water) this is energy efficient (positive buoyancy favors floating, whereas negative buoyancy favors sinking). This consideration is important for larger animals. Smaller animals have larger surface areas relative to volume, and surface extensions can reduce their sinking rates.

Lowering ρ is the easiest way to aid buoyancy and is the only method that avoids active swimming. There are five possible ways:

Removal of calcium salts can contribute greatly to weight loss.

Nudibranch gastropods lack shells and swim; bottom-dwelling opisthobranch gastropods possess shells. Swimming jellyfishes lack heavy skeletons compared with sessile corals. Loss of a skeleton makes the animal more vulnerable to predation and removes a means of support. Many swimming animals (e.g. blue crabs) retain their exoskeletons, even at the cost of more energy expenditure when swimming. The squid has replaced the heavier calcium carbonate shell with a chitinous ‘pen’ while the octopus has lost its shell totally.

Cranchid squids have a coelom filled with a fluid with ρ = 1.011 g cm–3: the coelom comprises about 67% of the body volume and if it is punctured the squid sinks. The coelomic fluid is isotonic to seawater but with an ammonium ion concentration of 480 mmol per liter as compared with a sodium ion concentration of 80 mmol per liter. The ammonium ions are trapped in protein metabolism. The anion is chloride, the heavier sulfate ions being excluded. The pH is 5.2, the result of a sodium pump leaving an excess of anions and consequent high proton concentration. (The jellyfish Aurelia sp. also excludes heavy sulfate ions.)

Removal of ions without replacing them leads to osmotic problems: teleost fishes are hypotonic but any weight saving is counteracted by muscles and bone. A few deep-sea teleosts have reduced skeletons and this may assist buoyancy.

Elasmobranch fishes have large, oily livers making up nearly 20% of the bodyweight (the equivalent figure for teleosts is 2%). The shark Etmopterus spinax has a liver making up 17% of the bodyweight: 75% of the liver is oil. Half of this oil is squalene, C30H50, ρ = 0.86 g cm–3; most oils have densities between 0.90 and 0.92 g cm–3. Bottom-living skates and rays have smaller livers with less fat.

Some abyssal teleosts have swim-bladders full of cholesterol (ρ = 1.067 g cm–3); their role in buoyancy is dubious. Sperm whales have a spermaceti organ in the head. When the whale dives the oil in the organ is cooled and becomes denser, facilitating neutral buoyancy and hovering at one depth while it feeds on squid. On surfacing, warm blood is pumped into the organ: the oil warms and becomes less dense, helping the whale to surface.

Gas has a low density so that even a small volume can assist buoyancy. The presence of rigid or flexible walls on a gas float is important.

As the float descends, the pressure on the outside increases and is matched by that inside. This pressure increases by 100 kPa (1 atmosphere) for every 10 m depth. Gas must be secreted against this pressure, so the amount of gas secreted to fill a given volume = n × the amount of gas secreted on the surface, when the hydrostatic pressure outside is 100 n kPa [i.e. if the outside pressure is 500 kPa (at 40 m depth) 5 × as much gas must be secreted]; there will also be a tendency for gas to diffuse out at this pressure. The gas in the float must be obtained from seawater where the oxygen tension is always 20 kPa, the nitrogen tension 80 kPa. As the animal moves up and down, the gas volume changes, together with its density: thus the animal will have neutral buoyancy at only one depth. If the animal descends, the weight (not the mass) of the animal rises; if the animal ascends, the gas expands, risking rupture of the float.

A rigid wall allows more vertical movement, although the walls must be stronger (and thus heavier).

In the siphonophore cnidarian Physalia sp., the Portuguese man-o’-war, there is a balloon-like float containing 85% nitrogen and 15% carbon monoxide; the float, about 10 cm long, acts as a sail whereby the Physalia colony is blown around on the ocean surface. The gas is held at approximately 100 kPa pressure: L-serine acts as the substrate in the synthesis of carbon monoxide. The float has a valve to allow the release of excess gas. Rigid floats in invertebrates permit ascent and descent in the water (N.B. Physalia remains on the surface.)

In the cephalopod cuttlefish Sepia sp., 9.3% of the body volume is made up of the cuttlebone (ρ = 0.57–0.64 g cm–3). The bone is laminar, comprising thin layers of chitin-reinforced calcium carbonate. The lamellae are held 0.7 mm apart by pillars of the same material. The spaces between the lamellae are filled with (mainly) nitrogen at about 80 kPa. In the older, more posterior chambers of the bone there is a liquid containing NaCl hypotonic to the seawater and body fluids: its weight helps to keep the tail horizontal when swimming. The higher osmotic pressure outside the cuttlebone tends to withdraw water from the bone while hydrostatic pressure tends to push water back in, establishing a balance.

In seawater, the cuttlebone gives a net lift of 4% of the cuttlefish’s weight and so approximately balances the excess weight of the rest of the cephalopod. Despite its bulk, the cuttlebone has the advantage as a buoyancy device of being more or less independent of depth. Density can be reduced by pumping (by active transport) ions out of the cuttlebone, with water followed by osmosis (during the night, allowing ascent), or the process may be reversed, making it denser, during the daytime.

In Nautilus sp., new float chambers are added to the external shell as the cephalopod grows; initially, the new chambers are filled with NaCl solution. Sodium ions are actively transported out when the shell is strong enough (the pump is located in a strand of tissue, the siphuncle, passing through the chambers), water following passively by osmosis. The gas then diffuses in: nitrogen at 80 kPa and oxygen at 10 kPa (total pressure about 90 kPa). Freedom of vertical movement is only constrained by the ability of the shell to withstand pressures.

Many teleosts have a swim-bladder, its presence or absence reflecting life-habit, not taxonomic position. Some bottom-dwellers lack swim-bladders, having no need for buoyancy; a few powerful, fast-swimming fishes lack them too (e.g. the mackerel) where the swim-bladder may be disadvantageous, placing constraints on rapid vertical movements. (An analogy between an airship with positive buoyancy and low-power engines and an airplane with negative buoyancy but powerful engines to give enough thrust to provide sufficient lift is appropriate.)

Typically, the swim-bladder is an oval sac, lying below the vertebral column in the abdomen. It is the homolog of the lung. In marine teleosts, it comprises 5% of the body volume, in freshwater species 7%. ρ = 1.07 g cm–3 for a bladderless teleost, ρ = 1.02 g cm–3 for a fish with a swim-bladder. The teleost is only at neutral buoyancy at one depth: descent results in a decrease in buoyancy with the necessity to work harder to compensate. Ascent endangers the fish through the swim-bladder bursting.

In physostome fishes, there is a connection between the swim-bladder and the esophagus, and the bladder can be filled by gulping air. In deeper-sea fishes, such gulping would be impractical and the connection has been lost.

This is known as a physoclist condition. In physoclist fishes the gases must come from the blood and must be secreted at the pressure at which the fishes live. Bladdered fishes have been found at 4000 m depth, that is with gas at a pressure of 40 000 kPa (400 atmospheres). The bladder is filled with a gas mixture rich in oxygen (in the whitefish, for reasons not fully known, the gas is mainly nitrogen).

A gas gland (see below) is located in the swim-bladder wall. If this was supplied with arterial blood directly from the gills the venous blood leaving the gland would tend to dissolve the swim-bladder gases and carry them away. The gas gland receives blood which has first passed through the rete mirabile (‘wonderful net’), Before the artery reaches the gas gland it splits into large numbers of straight, parallel capillaries which reunite before reaching the gas gland. The vein draining the gas gland does the same, parallel venous capillaries running among and alongside the arterial capillaries. This arrangement permits a countercurrent exchange system for dissolved gases. If the bladder gas is at 1000 kPa, venous blood draining the gland contains gas also at this pressure; in the rete mirabile, the gas is lost to the blood contained in the inflowing, arterial capillaries. On leaving the rete the venous blood has no more gas than does the arterial blood flowing into the rete, and gas is thus conserved. 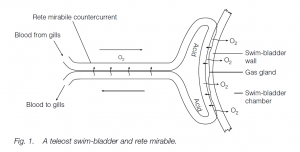 Characteristics of the rete mirabile are:

Physoclist swim-bladders have a second vascular connection, the oval, normally closed off by a sphincter, and without the ‘protection’ of a rete. The oval can be made operational by relaxation of the sphincter; this allows gas to diffuse from the swim-bladder to the blood, rapidly, when the fish loses depth.

Assume a fish needs to secrete oxygen against pressure in the swim-bladder of 1000 kPa (10 atmospheres). The oxygen pressure in arterial blood is 20 kPa. If oxygen is deposited in the swim-bladder the venous blood will contain less oxygen when it leaves the rete mirabile, the difference being the oxygen secreted into the swim-bladder. The gas gland produces lactic acid which enters the blood, reducing the oxygen affinity and capacity of the hemoglobin: this is known as the Root effect (the Root effect is a type of Bohr effect, and oxygen is released into the swim-bladder. The oxygen pressure (tension) in the venous blood leaving the gas gland is increased as the gas dissolves. In the rete, the oxygen diffuses into the inflowing capillaries and the gas is conserved in the system. The lactic acid also remains in the rete system because of the countercurrent, further enhancing the process. Oxygen pressures build up so that there is a countercurrent multiplier effect (compare the loop of Henle in the mammalian kidney). Lactic acid not only exerts a Root effect, it also ‘salts out’ blood gases, including nitrogen, explaining its presence in the swim-bladder of many species (e.g. whitefish). 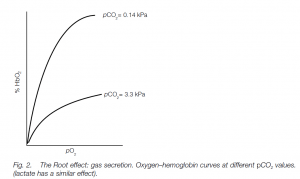