In living organisms, some diseases are caused by Mycoplasma, a very small microorganism. These organisms are much like other microorganisms such as bacteria, chlamydia, rickettsia, and viruses, the smallest free living cell known. Mycoplasmas and prokaryotes were placed under the class mollicutes (Latin mollis = soft , pliable + cutis = stain) and the Mycoplasmatales order without cell wall. Mycoplasmas or mollicutes (soft skin) are bound by a triple layered membrane and have no cell wall. They are the smallest microorganisms that are known to cause a number of animal and human diseases. While observing the causative agent of pleuropneumonia in culture, Louis Pasteur first noticed them. He was unable to isolate them in the medium of pure culture. Pasteur’s laboratory’s Nocard and Roux (1898) cultured the microorganism in serum-containing media and showed that the pleomorphic microbes could produce the disease in healthy inoculated cattle. 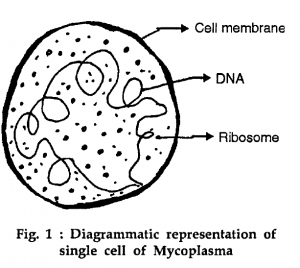 These were pleomorphic and were termed PPLO (organism-like pleuropneumonia). The name Asterococcus mycoides by Borrel et al (1910) was later given to this organism. Asterococcus mycoides was placed under the genus Mycoplasma by Nowak (1929). All of those kinds of mycoplasmas are now called organisms. The plant pathologists were surprised in 1967 by Japanese scientists Doi, Teranaka, Yora and Asuyama, who stated that Mulberry dwarf, Potato witches broom, Aster yellows or Paulownia witches broom, suspected of being the virus diseases, were in fact caused by Mycoplasma. As many as 150 plant species in which Mycoplasmas could be detected were known in 1976. 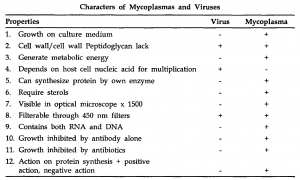 (1) They are very small, non-motile and prokaryotic (except for spiroplasma) and maybe parasitic or saprophytic.

(2) There is no cell wall and the cytoplasmic membrane, the three-layered unit membrane structure, is the outer boundary of the cells.

(3) Their cells have plasticity (pleomorphic) and are capable of assuming different shapes from spheres to branched filaments.

(4) Although the smallest cells are about 0.3 nm in diameter, plasticity makes it possible for the cells to pass through bacteriological filters.

(5) For their growth, they require sterols. They are sensitive to supersonic desiccations of vibrations and most of the variables of the physical environment.

(6) Under the stereomicroscope, the colony of mycoplasma on a solid agar medium appears like a fried egg. In the center, which is surrounded by surface growth towards the periphery, the colony shows a spherical or hemispherical portion. The typical colony is biphasic (characterized by an opaque, granular central area with a translucent peripheral zone) with a fried egg appearance.

(8) They may be cultivated in vitro as facultative anaerobes or compulsory anaerobes in non-living media of rich composition.

(9) Approximately 1/5 to 1/2 THz of the size of the genome of mycoplasmas is that of bacteria.

(10) The genetic material is a fibrillary (double-stranded) DNA naked circular chromosome about 3 nm thick with a molecular weight ranging from 44 x 10 to 1200 x 10 daltons. Guanine: The DNA cytosine ratio ranges from 24-10%.

(11) It is presumed that the mode of multiplication is through budding or binary fission.

(12) Chemically, because they have 4% DNA and 8% RNA, they are much closer to bacteria; 70s ribosomes are present in the cytoplasm.

(13) Cells are non-motile, but a few species have observed gliding motility.

(14) Mesosomes are not found in mycoplasma cells, but 50-80 percent proteins, 8-17 percent RNA and 4-7 percent DNA are found in plasma Ids based on dry matter.

(15) They do not show a reaction to Gram staining, i.e. they are in nature Gram-negative. A quick and simple technique called Dien’s stain for staining technique was suggested by Stevens & Fox (1979).

In 1966, mycoplasma was separated from bacteria by the International Committee of Bacterial Nomenclature and placed in the Mollicutes class. (Mollis = flexible, + stain = cutis). On the basis of the sterol requirement, Edward &Friendt (1970) classified Mycoplasma or PPLO under various groups.

The Mycoplasma cell ultra-structure appears as a prokaryotic unicellular microorganism. The outermost cell boundary is a plasma membrane unit that consists of lipoprotein in three layers. Phospholipids and cholesterol are the chemical constituents of lipoprotein. In thickness, this unit membrane is 80-100Ao and selectively permeable. The membrane surrounds the cytoplasm of 70s ribosomes, R.N.A., a naked circular fibrillary double-stranded DNA chromosome about 3 nm thick, one or more dense electron areas and some empty vacuoles.

On the basis of dry weight the chemical composition of Mycoplasma is as follows:Protein – 50-80%

Mesosomes are not found in Mycoplasma cells, but there are 40 different types of enzymes found in the cytoplasm. Because Mycoplasma can pass through many filters and grow in media that do not contain living tissue. They are therefore considered to be intermediate microorganisms between bacteria and viruses, which are chemically much closer to bacteria. Due to their special cell structure and physiology, various scientists have named Mycoplasmas with different nomenclatures. Microbiology jocker, plant kingdom jocker, cell wall-free prokaryote, and bacteria with their coats off.
Reproduction Morowitz and Tourtelotte (1962) reported the lack of sexual and sexual intercourse.
Reproduction in Mycoplasma, but reproduced by I Fragmentation (ii) Budding (iii) Young elementary bodies The formation of the elementary body is an important mode of reproduction in Mycoplasma.

The cells of Mycoplasma laidlawii show uneven division at the time of multiplication, as a result of which elementary bodies of 330-450 Ilm size are formed. They’re very small and they can live freely. They are known to be primary bodies. These primary bodies increase in size and shape accordingly referred to as secondary and tertiary structures. Within these larger bodies, the elementary bodies are formed, and this stage is known as the quarterly structure, and after the rupture of larger bodies they are released, and this quarterly structure develops into a complete mycoplasma cell.

Mycoplasma causes many diseases in plants animals and human beings. The important ones, caused in plants are as follows:

(i) Plant associated with mycoplasma are infected in the sieve tubes of the plants causes upsetting the hormonal balance resulting in witches broom growth (all the axillary buds grows and convert into bunch).

(ii) In some cases flower leaf assume the shape of foliage leaves (phyllody) and various intermediate stage between flowers and leafy sprouts can be found (antholysis). In many cases no anthocyanin are formed in petal.

(iv) Colour breaking in the calyx portion of infected flower causes greening of all flower parts (virescence) and transferred into green leaf like structure (Phyllody).

(vi) Excessive callose formation and cell necrosis occurs in the sieve tubes of infected plant which can be visible under a fluorescence microscope after staining with aniline blue (serves as indirect indication for the presence of mycoplasma).

(i) Plant mycoplasmas are known to be transmitted by certain insect vectors (leaf hopper) of cicadellidae and psyllidae. Once mycoplasma invade the insects salivary glands the vectors can transmit these organisms with the help of their saliva to healthy plants.

(ii) By grafting, mycoplasma can be transferred to healthy plant.

(iii) With the aid of Cuscuta, mycoplasma can be transferred from diseased to healthy plants. (with the help of haustoria) but this type of. transmission does not occur in nature.

(iii) Two species of mycoplasma viz. M. hominis and M. fermentants has been found responsible for infertility in men.

(v) Mycoplasma have also been found in cases of arthritis and inflammation of the middle ear.

(i) Inflammation of genitals in animals is caused by Mycoplasma bovigenitalillm.

(ii) Bovine pleuropneumonia in animals is caused by Mycoplasma mycoides.

(iii) Agalactia of sheep and goat is caused by Mycoplasma agalactiae.

(iv) Sinusitis in hen is caused by Mycoplasma melegridis.

Thermoplasmas are heat loving mycoplasma. The optimum temperature for growth is 59°C. They are Gram variable.

The genus Thermoplasma grows at a temperature of 55-59°C (max. 62°C and PH 2 (minimum 1 to max. 4). The genus is distinct from other extreme thermophiles as it resembles the eubacterial genus Mycoplasma in lacking a cell wall and forming fried egg colony. It grows in refuse piles of coal mines which contain iron pyrites (PeS) which oxidized to sulphuric acid by lithotrophs. Thennoplasma lacks a cell wall but cell membrane contains large amounts of lipopolysaccharide and glycoprotein (diglycerol tetraethers). The DNA is stabilized with a histone like protein, thus resembling the chromosome of eukaryote.

Spiroplasma are spiral form mycoplasmas. The helical filamentous forms are motile and show rapid rotary or screw motion and slow undulation motion. They are gram positive.

Mycoplasma resembles L-form in (i) having similar ultrastructure (ii) soft pleomorphic cells devoid of mucopeptide wall (iii) not osmotically fragile (iv) growth on media without osmotic protection. They differ from L-forms in the following characters : (i) while the L-forms revert to normal cells when the antibiotic is removed, mycoplasma never synthesizes the wall and (ii) while L-forms are non-pathogenic, mycoplasmas are important pathogens.

L- form was isolated by Kleinberger Nobel in 1935. The cells were called L- forms after Lister Institute in London where they were isolated. L-forms are spheroplast like structure lacking cell wall.

These naked protoplast can also be isolated from Salmonella, E. coli and Proteus (both Gram positive and Gram negative) as well as from other bacteria by cultivation on serum agar with penicillin (100μg/ ml) in laboratory conditions.

They produce fried egg type colonies which resemble those of mycoplasma species. Two types of L-forms have been isolated. The L-form colonies can be lifted and cultured at higher concentration of penicillin as at lower concentrations the L-forms revert to normal bacterial cells with walls.

L forms resemble protoplasts and spheroplasts in (a) lack of flagella. (b) inability to sporulate (c) lack of some or all cell wall antigens (d) revers on to normal cells when antibiotic treatment is stopped.

The L-forms do not multiply by binary fission. They increase in size (upto 50 μm) and than form large number of small (0.1-0.31μm) units called elementary corpuscles by fission or budding.

These similarities suggest that in nature, mycoplasma might have originated from L-forms by loss of the capacity of reversion to normal cells. Thus L-forms are closest to mycoplasma, could be thought of as their proginator.