Golgi Complex and its function

Golgi Complex and its function

The Golgi apparatus was one of the first organelles to be discovered and studied in detail. In 1898, Italian physician Camillo Golgi while investigating the nervous system of Barn owl, discovered this structure termed as internal reticular apparatus. But later in 1890, this apparatus was named after him. (Previously as this apparatus was known to be network, they were also called dictyosomes (Greek, dactyls = net).The number, shape & position of the Golgi complex varies according to its function it performs. In varies in form from a compact mass to a disperse filament as network. The size is also linked to the functional state. It is large in nerve and gland cells but small in muscles. The formation of Golgi complex may be from the pre-existing stacks by division of fragmentation or from the rough ER, which changes to smooth ER and then eventually becomes the Golgi Cisternae.

The Golgi complex is usually situated near the nucleus, receives proteins and lipids from the ER, modifies them and then dispatches them to other destinations in the cell. In animal cells,Golgi complex breaks up and disappears following the onset of mitosis. It reappears during telophase of mitosis. In plants and yeast the Golgi complex remain intact throughout the cell cycle. 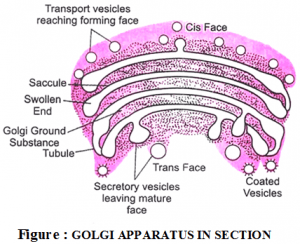 Golgi complex have several functions, they are as following: