Today the Protozoa are usually separated from the Animalia and are placed in the Kingdom Protoctista (Protista), with algae and slime-molds. However, protozoans possess numerous animal-like features and they are therefore included here.

Protozoans are unicellular (occasionally described as ‘acellular’ or ‘noncellular’) eukaryotes. A few algal protoctistans are multicellular, but the gametes, if they are present, are not produced in gonads, nor do the zygotes develop into embryos. There are several protozoan phyla, and the classification of the group is rather controversial. Key features in the problematical classification of the protozoans include organelle ultrastructure, locomotory and reproductive strategies, and nucleic acid sequences. At least 60 000 species have been described; sizes range from 2–3 μm to 3 mm, and many protozoans are organizationally very complex, as befits organisms in which one cell performs every function of a living creature. The ancestral protoctistans were probably amoeboid but lacked many eukaryotic organelles such as mitochondria, chloroplasts and flagella. These may have been acquired later by differentiation or by endosymbiosis of prokaryotic organisms. The evolution from differing points on a path leading to increased complexity could account for the range of protoctistan/protozoan forms.

Most protoctistans are heterotrophs in which food is assimilated from a food vacuole.

Many protoctistans are motile, using pseudopodia, cilia or flagella. Many forms are sessile.

Osmoregulation in marine forms is usually by means of a contractile vacuole.

Reproduction is usually both asexual and sexual, although some species are known which do not exhibit sexual reproduction (e.g. some amoebas). The animal-like (protozoan) Protoctista include the following phyla.

Sarcomastigophorans comprise approximately 48 000 species; one nucleus is present. Flagella or pseudopodia are used for feeding and/or locomotion.

Mastigophorans possess a flagellum (= whip) (Fig. 1) which beats in one or two planes, with a wave of motion passing from the base to the tip, or vice versa, and generating a reactive, propulsive force. Reproduction is typically by longitudinal binary fission; sexual reproduction is unknown in many species.

Phytoflagellates (which are also claimed by the plant biologists!) such as Euglena spp. often have spindle-shaped bodies covered by a pellicle. There is one long, principal flagellum and often a second, short flagellum borne at the anterior end. Chlorophyll in chloroplasts is usually present, and a nonliving cell wall is frequently found. Paranema has an anterior cell mouth (cytostome) and is a heterotroph similar in form to the autotrophic Euglena; Phacus  lives in the guts of tadpoles. Other autotrophic phytoflagellates include the solitary Chlamydomonas and the colonial Volvox, and the dinoflagellates (which also include heterotrophic forms such as the photoluminescent Noctiluca). 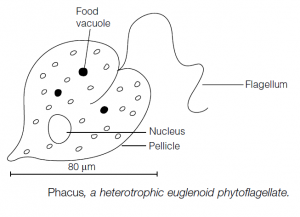 Zooflagellates lack chlorophyll and are heterotrophic. They include the freeliving choanoflagellates, with a collar of microvilli around the flagellum base (e.g. the colonial Codosiga), and the parasitic trypanosomatids. The latter are common parasites of mammals, particularly in tropical countries. They live in the blood and other tissues. The intracellular stage of the life cycle lacks a flagellum, but the extracellular stage has a flagellum extending laterally along the body and anteriorly. The parasites are transmitted by blood-sucking insects. Trypanosoma brucei is a cause of African sleeping sickness and is transmitted by the tsetse fly. Zooflagellate hindgut symbionts of termites [e.g. Barbulanympha sp., Trichonympha sp.] are among the most complex of protozoans: their cellulases digest wood eaten by their hosts, producing glucose which the termite can then assimilate. 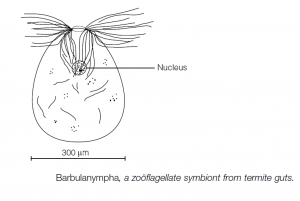 The sub-phylum Sarcodina includes amoebas and their relatives which possess pseudopodia. The pseudopodial condition may be ancestral or may reflect a secondary development from a flagellate stage. Amoebas may be naked or may be enclosed within a shell which is either secreted or is composed of cemented accretions of minerals, for example Difflugia sp. The pseudopodia have a thick outer ectoplasm layer which bounds a fluid endoplasm. Shape changes reflect changes in the molecular composition of the pseudopodium tip. The pseudopodia surround food particles to form a food vacuole; in freshwater species osmoregulation is effected by a contractile vacuole.

Foramenifera, Heliozoa and Radiolaria are sarcodine protozoans which possess shells or skeletal structures, often with very elaborate and sophisticated architectures. Long narrow pseudopodia, axopodia, are frequently present. The skeletons of these groups are important constituents of some sedimentary rocks. Asexual reproduction is usually by binary fission. The shells or skeletons of sarcodine protozoans, where present, may be divided or may be given to one of the daughter progeny. Sexual reproduction entails the fusion of two similar gametes. In Foraminifera there may be an alternation of sexual and asexual reproduction stages. 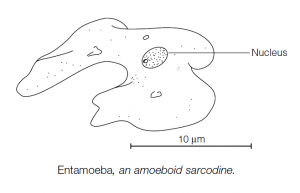 The Apicomplexa is so named because its members have a complex of organelles at the apical end of the organism: these are associated with the protozoans’ entry into the cells which they parasitize. Most members of the phylum belong to the taxon formerly known as the Sporozoa. Feeding is by micropores.

These intracellular parasites, common in Arthropoda, lack the apical complex present in sporozoans. There is a spore-like stage, characterized by a polar filament which everts when the spore enters the host. The filament provides a route for the amoeboid sporoplasm to leave the spore. Related phyla include the Myxozoa and the Ascetospora.

The Ciliophora is a large, relatively homogeneous phylum (with about 7000 species); its members all possess cilia at some stage in their life histories. The cilia can be used for locomotion and/or feeding. It is speculated that their origins may lie in a group of multiflagellate, multinucleate mastigophorans.

The size of ciliates can extend to 3 mm in length. Most forms are free-living in aquatic environments or in the water film microhabitats around soil particles. A few are symbionts (e.g. in the alimentary tracts of vertebrates). Primitive species can be radially symmetrical (e.g. Pronodon), but most are asymmetrical with a distinguishable anterior end. An outer pellicle of dense cytoplasm containing the surface organelles maintains the ciliate’s shape. Cilia arise from kinetosomes beneath the surface of the pellicle. The kinetosomes are connected in long rows by fibrils, the whole assemblage being termed a kinety. The surface (somatic) ciliature is primitively found in long rows covering the whole pellicle, but the rows may be reduced to bands, tufts or be absent altogether during some stages in the life cycle. Trichocysts in the pellicle can be discharged to transform into threads which can be used for anchorage or for the capture of prey.

Locomotion is by synchronized, metachronal waves of ciliary beating down the length of the body, as in Paramecium spp. Some forms, such as Stentor, are sessile, the beating of the cilia setting up feeding currents in the water. Feeding is via a mouth and a cytopharynx, leading to the fluid, interior cytoplasm where the food vacuoles are formed. Some ciliates capture their prey directly and can expand their mouths enormously; filter-feeders tend to have more complex buccal apparatus.

Osmoregulation is effected by contractile vacuoles at fixed positions within the body. The vacuoles have a ring of radiating tubules which drain water into a central vesicle which rapidly empties, on reaching a certain size, via a pore in the pellicle. Many ciliates can survive drought conditions by encystment in which the organism is enclosed in a tough waterproof cyst. Ciliates have one or more large macronuclei which control the nonreproductive, somatic functions of the body. Macronuclei are polyploid and are the main source of ribonucleic acid (RNA). Micronuclei are diploid and are involved in reproduction. Ciliates reproduce asexually by transverse fission; the number of asexual divisions seems to be limited before a form of senescence occurs. Organelles may themselves divide, or be resorbed and then re-form. 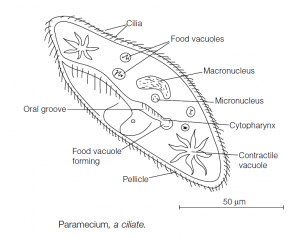 Sexual reproduction is by conjugation involving exchange and consequent reshuffling of genetic material. Conjugation is necessary to ‘rejuvenate’ individuals of a clone of asexually produced ciliates, otherwise, the organisms are incapable of further asexual division. Conjugation can occur without reproduction, i.e. only the exchange of genetic material takes place. The macronucleus disappears. The micronucleus undergoes two meiotic divisions; all but one of the haploid micronuclei disappear. The remaining micronucleus divides by mitosis to form two ‘gametes’, one of which migrates to the other conjugating individual to fuse with its stationary micronucleus, thus forming a zygote. The conjugants separate. The zygote nucleus divides by mitosis, one of the products forming the macronucleus.