Infection is a process in which a parasite enters the host (by invasion), establishes itself in the host bypasses the defensive barriers of the host, and produces a harmful effect. To cause infectious disease pathogen must accomplish the following –

2. It must be metabolized or multiply on or in the host tissue.

3. It must resist host defenses.

4. It must damage the host.

Each process is complex and all 4 processes must be fulfilling to produce infectious disease. Host-microbe interactions thus result in the following types of infection.

In most infectious diseases the pathogenic organisms may penetrate the body surfaces and gain access to the internal tissues. In some kind of infection, the pathogen may remain localized, growing near its point of entry. e.g. Urinary Tract of Infection (UTI) by E. coli. 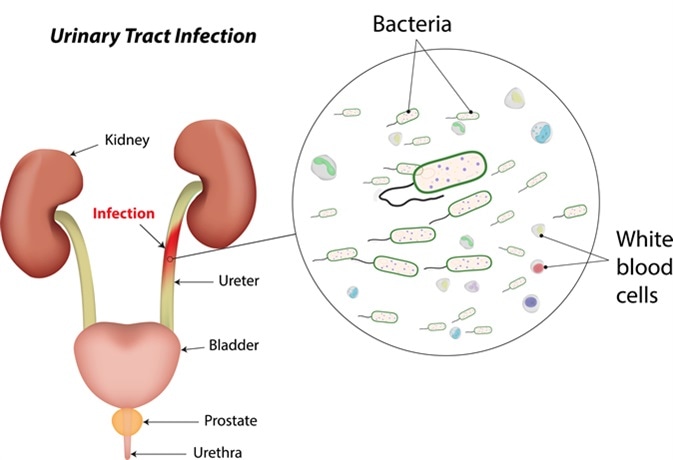 If the host is to recover from an infection it must eradicate the pathogenic microorganisms. However pathogenic microorganisms have weapons called virulence factors that fight (combat) with various defense mechanisms of the host. Thus an infection represents a battle between the defense mounted by the host and virulence produced by the pathogen, often the infection proves lethal to the hosts.

1. Primary infection – This is a fresh infection primarily caused by microorganisms. An initial localized infection that decreases the resistance and thus helps for further invasion by some microorganisms or other microorganism. e.g. Viral infection

2. Re-infection – It is a subsequent infection by the same parasite in the host.

4. Mixed infection- When more than one organism simultaneously infects the host it is called a mixed infection. e.g. Gas gangrene in which combination of Clostridium spp. may occur.

5. Focal infection – It is a localized chronic infection in the body. e.g. teeth, tonsils, accessory nasal sinuses. They produce physical or mental disturbance and allergic reaction.

6. Cross infection – When a patient is already suffering from one disease and acquire another infection this infection is called cross-infection.

7. Exogenous infection – This infection is caused by organisms from extraneous sources (other than commensals).

8. Endogenous /autogenous infection – Infection is caused by commensals due to the lowering of host resistance.

10. Latent infection – Some parasites following infection may remain in tissues in a latent or hidden form and produce a disease when host resistance is lowered.

11. Superinfection – It is colonization and invasion by resistant organisms after commensal flora is destroyed by antibiotics .e.g. infection of the alimentary tract and respiratory tract.

12. Chronic infection – When the disease progresses slowly and lasts for an extended period of time

then it is called a chronic infection. e.g. Leprosy and tuberculosis

13. Acute infection – If an infection reaches a point of greater intensity in a relatively short span of time and recovery does not prolong for months or years. Then it is called acute infection.

14. Endemic infection – Endemic disease is usually present in small numbers. In any given community. Example – common cold and mums.

a) Epidemic infection – In endemic disease increases no. very quickly then it is called epidemic disease. It attacks many peoples in the region at the same time e.g. Cholera.

1) Patients – In certain diseases infections are mainly acquired by healthy individuals when they are in contact with patients suffering from an infection. e.g. leprosy, TB., whooping cough, smallpox, influenza, amoebic dysentery, cholera.

2) Animals – Some pathogens are primarily the parasite of animals and under appropriate circumstances spread from the infected animal to man and this causes human disease. Such infection is called Zoonosis

3) Soil- Soil is the greatest reservoir of microorganisms; saprophytic organisms (harmless) are mostly present in the soil. Vegetation and similar habitat cause human infections such as tetanus, gas gangrene, Pseudomonas infection.

These may occur in carriers of the potentially pathogenic organisms and when opportunities are available they can invade other surfaces of tissues in some individuals. e.g. E. coli which is the normal flora of the human intestine may cause urinary tract infection, diarrhea.

Staphylococcus- A normal flora of the nose may cause boil in the skin or infect surgical wounds.

Pneumococcal — A normal flora of nasopharynges may cause bronchitis.

Thus sources of endogenous infection are sites in patients of the body where organism grows as harmless common sales.

Mode of transmission of infectious agent

To maintain an infectious disease in a population the causative agent must be transmitted from one susceptible host/source to another susceptible host. It can be divided into 4 main types-

Because air is not a suitable medium for the growth of infectious agents any airborne organism must have originated from sources such as animals, humans, plants, soil, food, or water. In air-borne transmission, the infection agent is truly suspended in the air and travels over a meter or furthermore sources to the host.

Infected secretion from nose upper and lower respiratory tract discharged in the environment similarly secretions expelled in coughing sneezing and talking are discharged in droplet spray form. Droplets when fall on the ground, become dried and lifted into dust. Droplet nuclei are smaller particles, 1-4 in diameter containing organisms within them.

It employs the coming together touching of the source of infectious disease agent and host it may be direct or indirect.

a) Direct contact employs actual physical interaction with the infection source. This route is frequently called person-to-person contact. It occurs by touching or sexual contact. By contact with oral secretions or lesions (boils), by nursing mother and throat the placenta certain infectious organisms can be transmitted by direct contact with animals or animal product.

i) Vector-borne infection – Living transmitters of an infectious organism are called vectors. Most vectors are arthropods (insects), ticks, mites, flies) or vertebrates (dogs, cats, bats) flies and other insects are generally considered as passive agents in the transfer of many microorganisms. Microorganisms are carried on the surface of insects it is called external vector-borne infection. In some cases, insects ingest a large enough dust of specific enteric organisms, and insects may serve as active cultures with the multiplication of pathogens in their digestive tract and excretion of microorganisms in their traces. Thus flies and other insects transfer these pathogenic microorganisms on food and if such food is eaten by a person then he may suffer from the disease called an internal vector-borne disease.

a) Fomites: These are inanimate objects in which or on which bacteria may remain alive and cause infection .e.g. eating utensils, beddings, drinking cups, surgical instruments. Diphtheria may transfer to children through dolls or in the school, it may be transferred through infected pencils when suck.

b) Fingers – Fingers and hands are extremely important in the spread of food poisoning and food infection. Clean hands and short and clean fingernails are important if the spreading of the diseases is to be minimized by food handlers.

c) Food – Careless handling of material to be consumed as food can cause serious problems. Lack of proper sanitation and improper refrigeration is the principal cause of food poisoning

iii) Water – water supply may become contaminated with human excreta especially when the source of water such as river as well which is without purification for consumption.

Is a person who harbors pathogenic microorganisms without any signs of disease and hence in the spread of disease to a healthy individual. e.g. Pneumonia, diphtheria, typhoid, polio, are spread by carriers. Carriers may be of the following types-

a) Convalescent carriers- person in whom limited localized infections continue for a variable period. E.g. weeks or months after clinical recovery from disease. e.g. typhoid fever- in typhoid fever organisms may be localized in the gall bladder.

b) Contact carriers – The person who acquires a pathogen from the patient and becomes a carrier is called a contact carrier. A healthy contact carrier does not show any symptoms of the disease. It may suffer from latent infection.

c) Chronic carriers- If a person harbors a pathogen for a long period (up to several years) and can transmit the disease to others is called chronic carriers.

Some diseases have been known to be carried transplacentally from infected mother to fetus in the uterus e.g., syphilis. rubella, measles, toxoplasmosis. It is not known why in some cases the fetus escapes and in others it gets infected.