In mammals, most tissue fluid is withdrawn back into the blood by osmosis (‘pulled’ by the colloidal osmotic pressure of the plasma) at the venous end of capillaries. Some excess fluid in the interstitial (intercellular) spaces is not returned to the blood, nor is fluid which may escape from the blood when vessels are damaged (e.g. by a blow), and a pool of fluid (an edema) collects. Such fluids lost by the blood are collected by the lymphatic system which routes them, as lymph, back to the bloodstream. 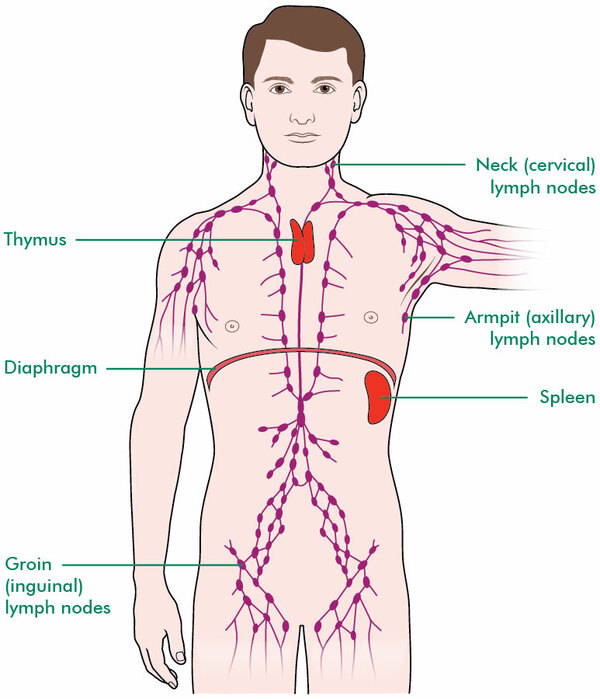 The lymphatic system consists of a network of progressively larger vessels (lymphatics): the smallest vessels are blind-ending capillaries, the largest are similar to veins. They do not form part of a continuous circuit. Tissue fluid seeps into the lymph capillaries whence it travels to large lymphatic thoracic ducts which drain into the subclavian veins near the collar bones. The lymph consists of a plasma-like fluid (in which the protein concentrations may differ from those found in blood plasma) and cells, particularly leukocytes: erythrocytes are not normally present. Specialized lymphatics (lacteals) are found in the villi of the gut: these are involved in fat transport to the liver.

Lymph nodes are distributed throughout the lymphatic system: they are situated strategically to intercept antigens and are important secondary lymphoid organs.

In mammals, lymph is propelled by body muscle contraction and perhaps by some peristaltic contraction of the lymphatics. Valves prevent back-flow and low pressure in the thorax on inspiration aids flow. In lower vertebrates, lymphatic capillaries are often open-ended. Lymph circulation can be assisted by pulsatile lymph hearts.