By measuring the mass-to-charge ratio of ions in the gas phase, mass spectrometry determines the molecular mass. The ions are generated by inducing either the loss or the gain of a charge (e.g. electron ejection, protonation or deprotonation) in the ionisation source in this process.
They can be electrostatically directed into a mass analyzer once the ions are formed in the gas phase, separated according to mass and finally detected. Thus, there are three basic components of a mass spectrometer: the ionisation source, the mass analyzer, and the detector.

A sample molecule studied by a mass spectrometer must be converted by the ionisation process into gas-phase-charged particles before they can be analysed and detected. The word ionisation is misleading because the ionisation of molecules per se is not carried out by most ionisation processes. Instead, the word ionisation refers to the transfer of analytes to the gas phase while maintaining their charge and/or acquiring a charge, typically in the form of a proton, from the sample environment. For the conversion of the sample to ions, several methods are used.

A beam of high energy electrons strikes the molecules during electron ionisation. The collision of the electron molecule strips out an electron from the molecule, creating a cation.

The sample to be analysed is dissolved in a matrix during desorption ionisation and placed in the high-energy beam path of ions or high-intensity photons. It is defined as MALDI (matrix-assisted laser desorption / ionisation) in the case of high intensity photons. Analytes are put in a light-absorbing solid matrix in MALDI. To protect the analytes from being destroyed by a direct laser beam, a matrix is used. The solid matrix heavily absorbs laser radiation and acts as an energy deposition receptacle. The analytes are ionised with a short pulse of laser light and then desorbed from the matrix into the vacuum system. The precise mechanism of the ion origin in MALDI is still not fully understood. Matrix materials commonly used are aromatic compounds which contain functional groups of carboxylic acids. The matrix’s aromatic ring acts as a chromophore for laser irradiation absorption, leading to the desorption into the gas phase of the matrix and analytes. 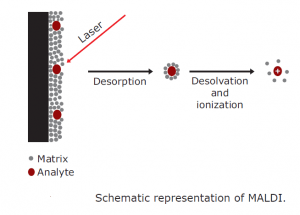 The sample is dissolved into a polar, volatile solvent during standard electrospray ionisation and pumped through a narrow, stainless steel capillary. On the tip of the capillary, a high voltage of 3 or 4 kV is applied. The sample emerging from the tip is dispersed into an aerosol of highly charged droplets as a consequence of this powerful electric field. Through solvent evaporation, aided by a flow of drying gas, the charged droplets diminish in size. Finally, charged, solvent-free sample ions are released from the droplets.
All of the above-mentioned ionisation processes are fundamentally different techniques, but they achieve essentially the same end result through non-destructive vaporisation and ionisation to generate gas phase ions.

The beam of ions is accelerated by an electric field once the sample has been ionised, and then passes into the mass analyzer, the area of the mass spectrometer where the ions are separated according to their mass-to – charge ratio. There are several types of mass analyzer, just like ionisation methods. TOF (time-offlight) mass analysis is the most common type of mass analyzer. The TOF mass analyzer evaluates the flight time of ions. It is based on the simple idea that, depending on the mass of an ion, the velocities of two ions with the same kinetic energy will vary; the lighter ion will have greater velocity. The ions reach the detector at different times because the ions have distinct velocities. As compared to the larger ions, the smaller ions reach the detector first because of their higher velocity. Hence, because the mass is determined from the time-of-flight of the ion, the analyzer is called TOF. The time of arrival at the detector depends on the ion ‘s mass, charge and kinetic energy.

The kinetic energy of an ion accelerated through an electrical potential, V, is:

The velocity of the ion is the length of the flight path (L) divided by the time (t) it takes the ion to travel over the distance;

Replacing the value of v in equation (1) gives: