It is the transformation from one to another morphological and physiological form of an animal during its life cycle; true metamorphosis is concerned with preparation for life in a different habitat (e.g. fresh water as opposed to sea, land as opposed to water). Changes may be associated with migration and/or sexual maturity.

In holometabolous insects (e.g. butterflies), the immature larva (grub or caterpillar) is very different from the adult insect in body form, habitat and behavior. There are a fixed number of species-specific larval molts, the last resulting in a pupa (often contained within a protective case or cocoon of silk) in which radical changes in body organization take place. (The chrysalis is the larval exoskeleton retained in some forms through the pupal stage.) The final molt occurs within the cocoon and the adult (imago) emerges. During larval life, the larval condition is maintained by a juvenile hormone secreted by the corpus allatum. Environmental cues such as light or temperature stimulate the brain to synthesize a brain hormone which acts on the prothoracic gland to release ecdysone which stimulates pupation and metamorphosis. 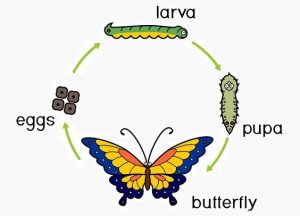 The urochordate larva has a typical chordate structure with a notochord, pharyngeal gill-slits, dorsal nerve cord and segmental muscles in a post-anal tail. Following metamorphosis, most of these features are lost, the tunicate settles to become sessile, the pharnyx expands to form a complex branchial basket for filter-feeding, and an ovotestis develops. [A speculation that during evolution a tunicate larva may have become sexually mature through a process of pedomorphosis to give rise to an ancestral vertebrate is important in theories of chordate phylogenesis.

Eels and salmonids can be said to undergo metamorphosis: the leptocephalus eel larva transforms into an elver, but little is known of marine transformations prior to a return to rivers. Salmon spawn in fresh water and the young parr, on reaching a certain size, transform into smolt which migrate to the sea. Endocrine changes are seen in the histology of the pituitary and thyroid glands.

The metamorphosis from the larval tadpole to the adult toad or frog involves many profound physiological and gene-regulatory changes. Larval life can vary in time from a few days in the spadefoot toad to several years in the bullfrog. The time of metamorphosis is affected by season and geography: Florida bullfrogs (Rana catesbeiana) metamorphose during their first summer, northern bullfrogs take 3 years. Nutrition, crowding and water temperature and pH are known to affect timing. The role of the endocrine system in amphibian metamorphosis is deduced from the fact that thyroxine (T4), tri-iodothyronine and TSH can initiate metamorphosis; antithyroid drugs (e.g. propylthiourea) prolong larval life or prevent metamorphosis.

Urodeles (newts, salamanders, etc.) show a less dramatic metamorphosis. Loss of external gills is the main feature, but tail resorption and head shape changes are also seen. As in anurans, urodelan metamorphosis is under the control of the hypothalamus–pituitary–thyroid axis and can be inhibited by PRL. The eastern spotted newt (Notophthalmus viridescens) shows a double metamorphosis, the first from an aquatic larva to a terrestrial ‘red eft’, the second when it returns to water after 2–3 years: there are changes in the skin and thetongue is lost. PRL levels rise and T4 levels fall after the return to water.

Neoteny and pedomorphosis are common in urodeles. Axolotls (Ambystoma mexicanum) are facultative neotenes. They only metamorphose under drought conditions or if the hypothalamus–pituitary–thyroid axis is stimulated, for example with TSH: the larval form can be sexually mature. Pituitaries from tiger salamanders (an obligate metamorphoser, in which metamorphosis must occur before sexual maturity) will cause axolotls to metamorphose if transplanted into them. Neotenic axolotl pituitaries will not cause hypophysectomized tiger salamander larvae to metamorphose. This suggests activity of the hypothalamus–pituitary–thyroid axis is too low to permit metamorphosis in facultative neotenes. (It is interesting that TRF is found in high levels in axolotl hypothalami, but seems to be ineffective in stimulating TSH and thereby metamorphosis.)

Perennibranchiate urodeles can never be induced to metamorphose, however much T4 is given (e.g. in the ditch-snake, Amphiuma means). Thyroid extracts from the perrenibranchiate Necturus sp. will facilitate metamorphosis in Salamandra sp. Receptors to pituitary–thyroid products are presumably lost in perennibranchiates.

A cryptometamorphosis does occur in neotenic axolotls: there is a change from the larval to the adult hemoglobin which is not connected to morphological metamorphosis (a similar phenomenon is noted in the anuran Xenopus laevis when tadpole metamorphosis is blocked with propylthiourea): this change may be unrelated to hypothalamus–pituitary–thyroid axial activity, or be driven by very low levels of such activity.