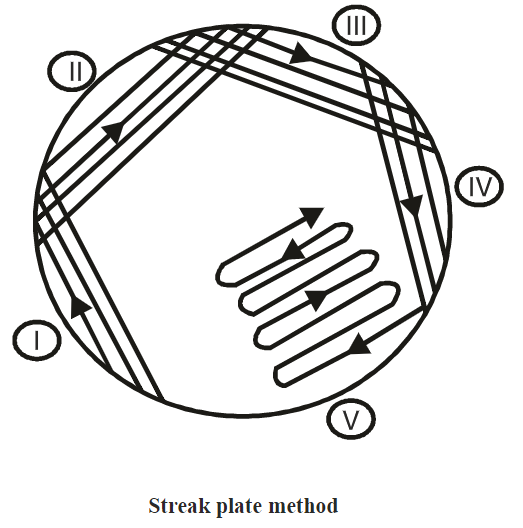 Stroke culture is made in tubes containing agar slope or slant. Slopes are seeded by lightly smearing the surface of agar with a loop in a zig-zag pattern taking care not to cut the agar. It is employed for providing pure growth of the bacterium for slide agglutination and other diagnostic tests.

In the preparation of the stab cultures, a suitable medium such as nutrient gelatin or glucose agar is punctured with a long, straight, charged wire into the center of the medium and withdrawing in the same line to avoid splitting the medium. The medium is allowed to set, with the tube in the upright position, providing a flat surface at the top of the medium.

This method is used for counting the number of living bacteria or groups of bacteria in liquid culture or suspension. A measured amount of the suspension is mixed with molten agar medium in a Petri dish. Either 1.0 ml or 0.1 ml of dilutions of the bacterial suspension are introduced into a Petri dish. The nutrient medium, in which the agar is kept liquid by holding it in a water bath at 45-50°C, is poured over the sample, which is then mixed into the medium by gentle agitation of the plate. When the agar solidifies, the plate is incubated inverted at 37°C for 48 hours, or most suitable for the species examined.
After incubation, colonies will grow within the nutrient agar (from cells suspended in the nutrient medium as the agar solidifies) as well as on the surface of the agar plate and can be enumerated using colony counters 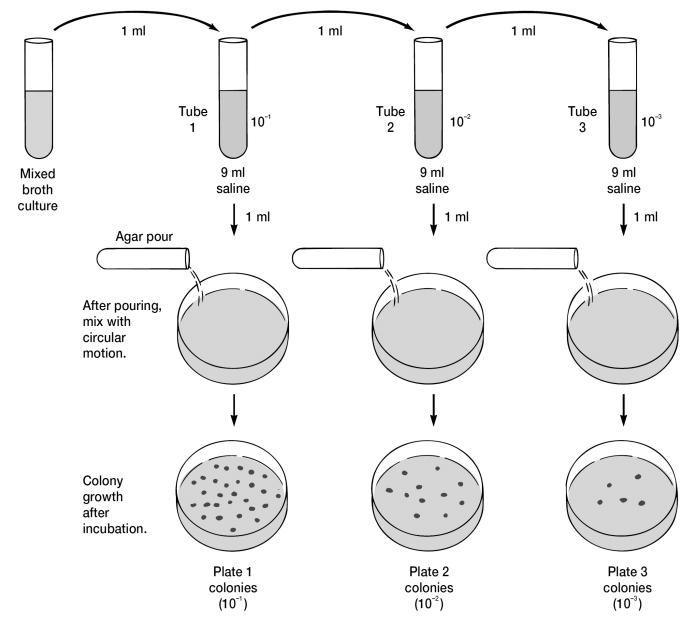 It is made by melting nutrient agar in a test tube, cooling it to 45°C, and inoculating it while molten from a liquid medium with a drop from a capillary pipette or a wetted straight wire, depending on the desired size of the inoculum. Withdraw the pipette or wire and flame the mouth of the tube if it has a cotton-wool plug. Replace the cap or plug and discard the pipette into disinfectant or flame the wire. Mix the contents of the tube by rotation between the palms of the hands before the agar solidifies. Incubate it at 37°C for 24 hours and look for the growth of the organisms.

Liquid cultures in tubes, bottles, or flasks may be inoculated by touching with a charged loop or by adding the inoculum with pipettes or syringes.