Muscles generate force. In humans they comprise 40–50% of the total body weight. Muscle is:

Note that muscles only do work when they contract: contraction is the active process.

Most muscles associated with the skeleton are arranged in opposing, antagonistic pairs: when one contracts the other is passively stretched (e.g. the biceps and the triceps bending and straightening the human elbow). In bivalve molluscs, the closing adductor muscles work against the elastic spring ligament in the hinge of the shell.

There are three major functions for muscle:

There are three types of muscle tissue.

(2) Cardiac muscle is a special type of striped muscle in the walls of the heart; contraction is involuntary.

(3) Smooth muscle surrounds the walls of internal organs such as the gut, bladder, blood vessels and the uterus; contraction is involuntary. 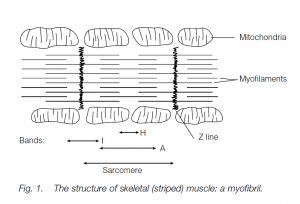 There are two kinds of myofilaments:

X-ray crystallography shows that, in cross-section, the filaments line up in hexagonal array. Actin filaments are held by their attachment to the Z lines (made up of the protein α-actinin). I bands are regions containing actin filaments alone; the light H band in the middle of each sarcomere is where only the heavy myosin filaments are present; the myosin and actin filaments overlap in the dark A bands. 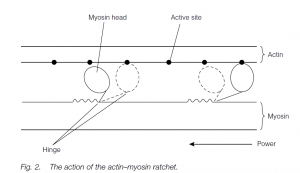 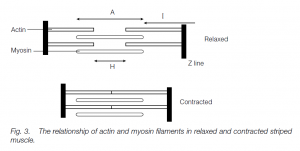 Longer-term energy needs must be supplied by cellular respiration:

Cardiac muscle resembles striped muscle in that it has similar assemblies of actin and myosin and has a striated appearance. The fibers are shorter and have branched ends. Contraction is spontaneous and involuntary. Gap junctions in the intercalated disks that join the branched cells longitudinally transmit action potentials so that the whole of the muscle contracts synchronously.

Smooth, involuntary muscle is also made up of actin and myosin, but the molecules are arranged much less regularly so there are no striations (thus ‘smooth’). Actin–myosin interactions are similar to those in striped muscle, although the actin filaments are attached to dense bodies rather than to Z lines. Calcium is not stored in a sarcoplasmic reticulum, but in the extracellular fluid. Contractions tend to be slower and more prolonged. In hollow organs such as the gut, the muscle fibers are arranged in sheets with a longitudinal orientation outside and a circular orientation inside.

(1) Multi-unit smooth muscle fibers (e.g. in the iris of the eye): here nerve impulses reach each fiber from a motor nerve end-plate.

Most striped muscles in vertebrates are phasic (twitch) muscles. Each fiber has one motor nerve end-plate. When the motor unit is stimulated by its neuron, a single stimulus with a threshold intensity leads to a twitch which is all-ornothing because the action potential spreads rapidly throughout the whole fiber. Gradation in muscle tension is facilitated by:

Slow phasic fibers are used to maintain posture and in endurance activities: they are often rich in myoglobin and are dark red in color. Such fibers are rich in mitochondria. Their slow contraction allows complete, aerobic oxidation of fuels and they fatigue only slowly. Fast phasic (glycolytic) fibers are used for quick bursts of movement; they lack myoglobin and have fewer mitochondria; their metabolism is often anaerobic. The two fiber types may be mixed (as in most mammalian muscles) or separated (the red and white meat in chicken or herring).

Tonic muscles are like phasic muscles with slow fibers, except that they have many nerve end-plates per fiber and do not follow the all-or-nothing phenomenon seen in a phasic muscle fiber twitch. Action potentials do not spread far and gradation in contraction is effected by more frequent impulses. Bivalve (e.g. oyster) adductor muscles contain phasic and tonic fibers, the former snapping the valves of the shell closed while the tonic fibers keep it closed.

Arthropod muscles (e.g. in crab claws) have very few neurons per muscle, and a given neuron may innervate several muscles. Each fiber may have multiple end-plates from each motor neuron, and up to five neurons may innervate one fiber: at least one neuron is inhibitory whereas the others facilitate varying degrees of slow or fast contraction. Combinations of motor stimulation can thus permit a gradation of action.

Work is the product of force and the distance through which the force works (force × distance): it is more or less constant per gram of muscle, but large muscles will, of course, generate more force. In some muscles, the fibers are arranged longitudinally (fusiform pattern) which permits contraction over a greater distance compared with muscles with the pennate or feathered pattern of fibers where the fibers are arranged to allow shorter fiber contraction, but the larger number of fibers generate much more force. Thus large muscles (e.g. the quadriceps of the human thigh), with a large cross-sectional area and therefore force, which can contract significant distances (e.g. about one-third the resting length), can do large amounts of work compared with small, short muscles.

Power is the rate of doing work. Very small muscles (e.g. those of the eyeball in a small rodent) are very powerful in that they contract very quickly: the power output per unit weight of muscle is higher than that of the equivalent, larger muscles of a larger mammal. Muscles develop their maximum power at intermediate velocities: the actual velocity depends on whether the fibers are phasic or tonic, but efficiency is at a maximum at 20–30% of maximum velocity. Energy is lost because of inefficiencies in the energy interconversion processes: much will be lost as heat and to overcome internal friction in the muscles

Somatic muscles in vertebrates are associated with the body wall and appendages (fins and limbs) and are usually striped; visceral muscles are associated with the gut and are usually smooth. Fish somatic muscles mainly comprise segmental myomeres which facilitate the undulation of swimming. Paired fins are moved by a dorsal abductor muscle (pulling the fin up) and a ventral adductor muscle (pulling it down). On land, the segmental arrangement of muscles is largely lost. The fin abductor and adductor muscles become divided to form the limb muscles attached to the limb girdles, and additional muscles develop in the limbs themselves.