Cnidaria are radially symmetrical animals with two body layers, an outer epidermis (ectoderm) and an inner gastrodermis (endoderm) which lines the gut, a condition known as diploblastic. Between the gastrodermis and the outer epidermis lies a gelatinous mesoglea containing some loose cells. Support is effected by the hydrostatic pressure in the gastrocoel (which acts as a hydrostatic skeleton when the mouth is closed), by the mesoglea and, in some polypoid cnidarians, by a calcareous exoskeleton. 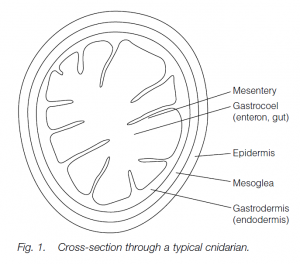 Muscle cells lie in the mesoglea. Sheets of radial and circular muscle fibers effect medusal swimming. Polyps are sessile but can move by burrowing, somersaulting or pedal creeping.

The gastrocoel, lined with endodermal cells, is the sole body cavity: it serves as the gut. Cnidarians are carnivores: they possess stinging cells, nematocysts, on their tentacles. The nematocysts discharge when undulipodia on the surfaces of the tentacles are stimulated. Food enters the gut via the mouth. The absorptive surface of the gut is increased by mesenteric folds. There is no anus, so waste is discharged through the mouth. This condition is known as an ‘incomplete’ gut. Many cnidarians possess intracellular, photosynthesizing dinoflagellates as symbionts; some freshwater hydras have similar symbiotic relationships with chlorophyte algae. The presence of such symbiotic organisms has been shown to enhance the growth of the cnidarians.

Control and integration is facilitated by a nerve net with nerve cells possessing unmyelinated, naked cells with highly branched fibers.

Gonads are aggregations of gametes; fertilization is external. Development is usually via a planula larva. Asexual reproduction by budding is common, particularly in colonial forms.

Three classes of cnidarian are recognized: the Hydrozoa, the Scyphozoa and the Anthozoa. 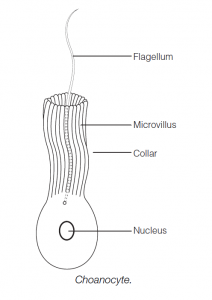 The class Scyphozoa (about 200 spp.) comprises the jellyfishes whose dominant life-form is a free-living medusa (Fig. 3). The fertilized egg develops into a planula larva which metamorphoses into a polyp: this continually buds over several years to form free-swimming male or female medusae. (Some oceanic scyphozoan planulae metamorphose directly into medusae, thus bypassing the polyp stage.) 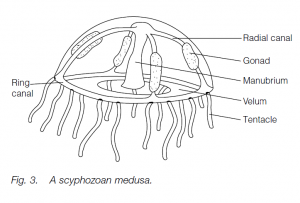 The Anthozoa (about 6200 species) are the sea-anemones, sea-pens, sea-pansies and the soft and stony corals. They are marine animals, solitary or colonial, existing as hermaphrodites or as separate sexes. Stony corals are important constituents of coral reefs. Anthozoan eggs usually develop into planulae which settle and metamorphose into polyps. No medusae form. Viviparity is observed in some species in which the planula is retained in the body, a mature polyp being released.

There are about 90 species of ctenophores; these marine, diploblastic animals possess a mesoglea and a branching gastrocoel. Eight paddle-like comb plates (ctenes) with aggregates of external cilia give a radial symmetry on which two tentacles superimpose a bilateral symmetry. Stinging colloblasts are the equivalent of the cnidarian nematocysts. They possess true muscles but have only a nerve net. Many are phosphorescent, and symbiotic algae within the combjellies can give the latter vivid colors. An example of a ctenophore is Cestum veneris, Venus’ girdle.