Most cells contain cytoskeletal elements comprising contractile filaments of actin and myosin, together with microtubules. This permits shape changes in the cells and facilitates the evolution of specialized mechanisms for movements.

Characteristic of protoctistans such as Amoeba spp. but also found in cells as diverse as amoebocytes of sponges and macrophages in mammalian blood and tissues, amoeboid movement is associated with pseudopodial processes on the cell surface. Pseudopodia (‘false feet’) can be used to engulf food particles or can attach to the substratum and pull the cell or organism along. Several pseudopodia can form on a cell surface simultaneously, but one becomes dominant. The pseudopodium has fluid endoplasm on the inside and stiffer ectoplasm as a sleeve outside. The deepest endoplasm moves ‘forward’ (i.e. towards the front of the pseudopodium which may not correspond to the front of the organism or cell), separated from the ectoplasm by a shear zone. At the ‘front’ of the pseudopodium it spreads in the fountain zone where it becomes more rigid and contributes to the advancing ectoplasm sleeve. At the rear end, ectoplasm is recruited into forward-moving endoplasm. In the endoplasm, actin is unpolymerized. Calcium, ATP and a binding protein facilitate the polymerization of actin in the fountain zone. 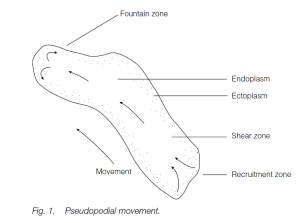 Usually, undulatory waves beat from the base to the tip of the long, whip-like flagellum; reaction to the beat in small components of the flagellum can be resolved into lateral and propulsive components – the lateral components cancel out, giving net propulsive thrust. Successive waves are in the same plane or at 90° to each other, giving a helical, propellor-like thrust. On some flagella, lateral processes are found enabling the flagellum to pull rather than push, this also affects the direction of the wave which is now direct rather than retrograde.

The beat of cilia is more planar; the action is oar-like. The cilium stiffens for the propulsive stroke but is more flexible for a ‘feathering’ recovery. Cilia and flagella have a common and universal structure in eukaryotes. In cross-section, nine circumferentially arranged double-microtubules (doublets) are seen together with two central, single microtubules (the ‘9 + 2’ model). Radial spokes exist between the outer doublets and the core tubules. The tubule walls are made of the protein tubulin. Dynein arms form temporary links to the next doublet. ATP-powered formation and breakage of dynein links allows microtubules to slide past each other, one doublet ratcheting past the next. The radial spokes permit the transformation of the sliding action into bending. 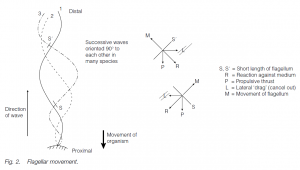 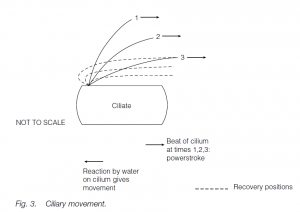 At the bases of cilia and flagella are organizing kinetosomes (basal bodies). These are equivalent to the centrioles associated with mitotic spindles. Where there are many cilia (e.g. in ciliophoran protoctistans such as Paramecium sp.), the ciliary beating is externally co-ordinated by hydrodynamic forces into a metachronal wave. Beat reversal (under internal control) is possible. Some metazoan animals (e.g. nemertine ribbonworms) use cilia to creep over the substratum: a layer of mucus may lubricate the surface. The mucus can itself by moved by cilia and used to trap food (e.g. in the sea-squirt pharynx) or to remove debris (e.g. in the mammalian trachea). 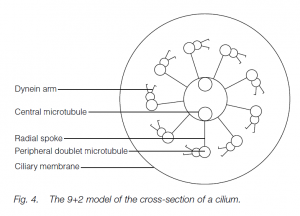