The collection of species found in the normal, healthy individual and which usually co-exist peacefully in a balanced relationship with their host are known as indigenous or normal flora of the body. It is not possible to eliminate the normal flora of the skin and intestine. Antibiotics are capable of drastically reducing their number to a minimum. So the pathogenic organism gets the opportunity to overgrow and cause lesions or diseases.
The normal flora is acquired during and shortly at birth and changes continuously throughout life. It is basically environmentally determined. Breastfed infants have lactic acid streptococci and lactobacilli in their gastrointestinal tract on the other hand bottle-fed children show a much greater variety of
organisms. The term flora is used because the majority of the organisms are bacteria. Man has about
10^14 bacteria associated with him, most of them in the large intestine.

Location of Normal Flora
Normal flora are found in those parts of the body that are exposed to or communicate with the external environment, e.g. skin, nose, mouth, intestine and urogenital tracts. Internal organs and tissues are normally sterile.

Skin
Staphylococcus epidermidis is one of the most common species (90%) of aerobes occurring in densities of 10^3 to 10^4 per square centimeters. Staphylococcus aureus may be present in the moist regions of the body (axillae, perineum, between toes, scalp). Anaerobic diphtheroids are found below the skin surface in hair follicles, sweat and sebaceous glands, e.g. Propionibacterium acnes. Candida may occur on scalp and around nails. They are infrequent on exposed skin, but can cause infection in moist skin folds (intertigo).

Nose and Mouth
They are heavily colonized by streptococci, staphylococci, diphtheroids and Gramnegative cocci. Some of the species found as a part of the flora in healthy persons are potentially pathogenic (Staphylococcus aureus, Streptococcus pneumoniae, Streptococcus pyogenes, Neisseria meningitidis, Lactobaccilus,
Candida etc.). The microbial density of normal flora here is 1011 per gram wet weight of tissue.
The surface of teeth and the gingival crevices carry large number of anaerobic bacteria. Plaque is a thin film of bacteria attached with polysaccharide matrix which the bacteria secrete. When teeth are not cleaned regularly there are increased activities of certain bacteria like Streptococcus mutans, which may lead dental caries. Acid fermented by these organisms from carbohydrates can invade dental enamel.
The pharynx and trachea carry their own normal flora, e.g. alfa and beta streptococci, staphylococci, neisseria and diphtheroids.

The upper intestine is colonized (10^4 organisms per gram) but density increases in the ileum. Here streptococci, lactobacilli, enterobacteria and bacteroids may all be present. In the large intestine, bacterial numbers are quite high (10^11 per gram) and many different species are found. The majority (95 to 99%) are anaerobes, bacteroides being common and major component of stool matter. A number
of harmless protozoans occur in the intestine, e.g. Entamoeba coli.

Urogenital Tract
Urethra in males and females is lightly colonized with Staphylococcus epidermides, E. fecalis and diphtheroids. In females before, puberty, the predominant organisms are staphylococci, streptococci, diphtheroids and Escherichia coli. Subsequently lactobacilli predominates, its fermentation of glycogen being responsible for maintenance of an acid pH, which prevents overgrowth by other vaginal
organisms. In case vaginal pH rises, Candida may overgrow causing a condition called thrush. 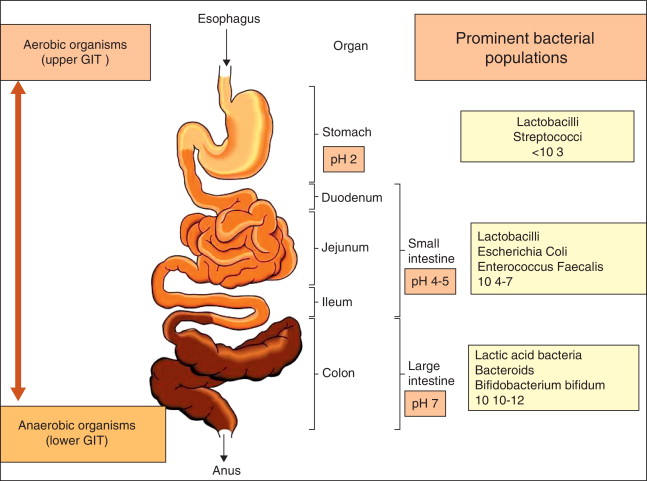 Disadvantages
1. The disadvantage of the normal flora lie primarily in the potential hazard for spread into previously sterile parts of the body, e.g. when intestine is perforated, skin is broken extraction of teeth, E. coli, from
perianal skin ascend the urethra to cause urinary tract infection.
2. Overgrowth by pathogenic members of normal flora may occur in conditions like after administration of antibiotics, increase in stomach or vaginal pH or when immune system becomes ineffective.
3. Isolation of normal flora may cause confusion in the diagnosis