Nucleic acid hybridization is a basic tool in molecular genetics that exploits the ability of single-stranded nucleic acid molecules to hybridize with complementary sequences to form double-stranded molecules. The principle of hybridization, in general, is the addition of a probe to a complex mixture of target DNA. The mixture is incubated under conditions that promote the formation of hydrogen bonds between complementary strands. The factors that affect hybridization characteristics are:

2. The target is attached to a solid matrix e.g., membrane

3. Both the probe and target are denatured

4. Denatured probe is added to the target in a solution

5. If there is sequence homology between the target and the probe, the probe will hybridize/ anneal to the target

6. The hybridized probe is the detected by autoradiography, chemiluminescence or colorimetric 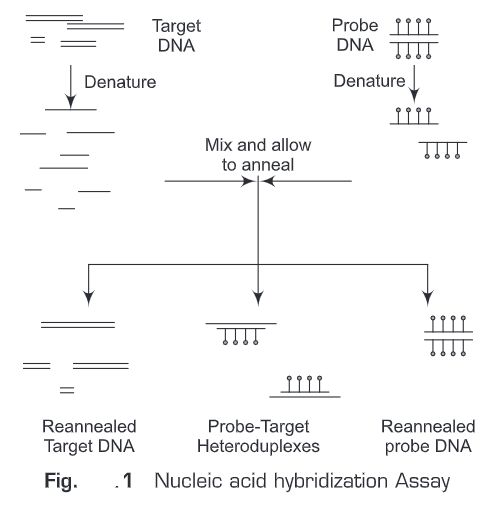 A variety of techniques utilize hybridization of DNA or RNA probes. Such as:

A hybridization probe is a nucleic-acid (DNA or RNA) fragment that is complementary to another nucleic-acid sequence and thus, when labeled (with radioisotope, fluorescent dye, etc) can be used to identify complementary segments present in the nucleic-acid sequences of various microorganisms. The probe actually hybridizes to single-stranded nucleic acid (DNA or RNA) molecules because of complementarity between the probe and target. The labeled probe is first denatured into single DNA strands and then hybridized to the target DNA (Southern blotting) or RNA (northern blotting) immobilized on a membrane or in situ. To detect probe hybridization to its target sequence, the probe is labeled with a molecular marker (radioactive -32P, a radioactive isotope of phosphorus incorporated into the phosphodiester bond in the probe DNA; or fluorescent molecules – Digoxigenin).

A single-stranded DNA molecule used in laboratory experiments to detect the presence of a complementary sequence among a mixture of other singled-stranded nucleic acid molecules. Therefore, DNA probe is a short sequence of DNA labeled isotopically or chemically that is used for the detection of a complementary nucleotide sequence.

A single-stranded RNA molecule used in laboratory experiments to detect the presence of a complementary sequence among a mixture of other singled-stranded nucleic acid molecules. Therefore, RNA probe is a short sequence of RNA labeled isotopically or chemically that is used for the detection of a complementary nucleotide sequence. Single-stranded RNA probes also called complementary RNA (cRNA) or riboprobes and are often used for in situ hybridization because: of high sensitivity; RNA-RNA hybrids are more stable than DNA-RNA hybrids; and non-specific tissue signals can be removed after hybridization with RNase A since RNA duplexes are resistant to degradation by RNase A. 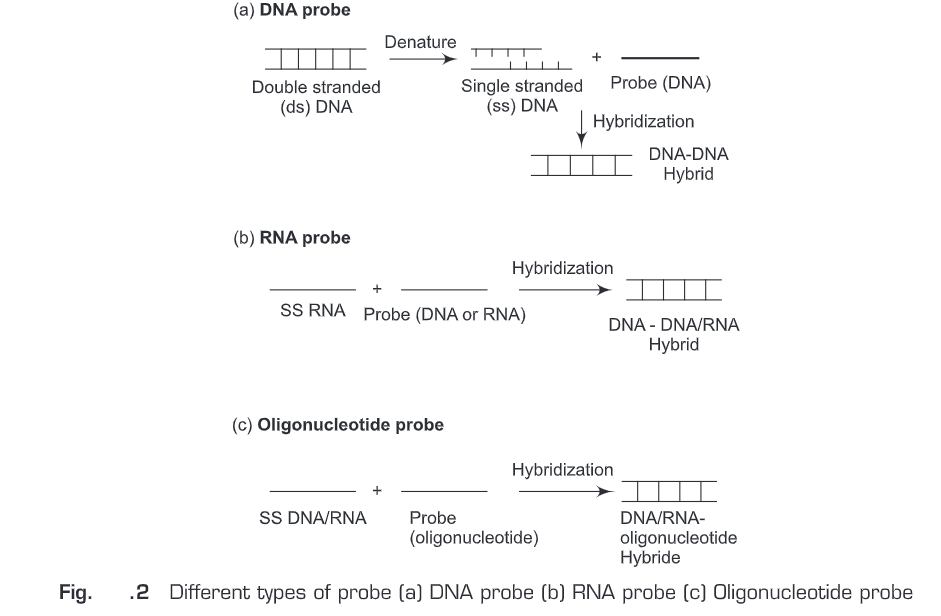 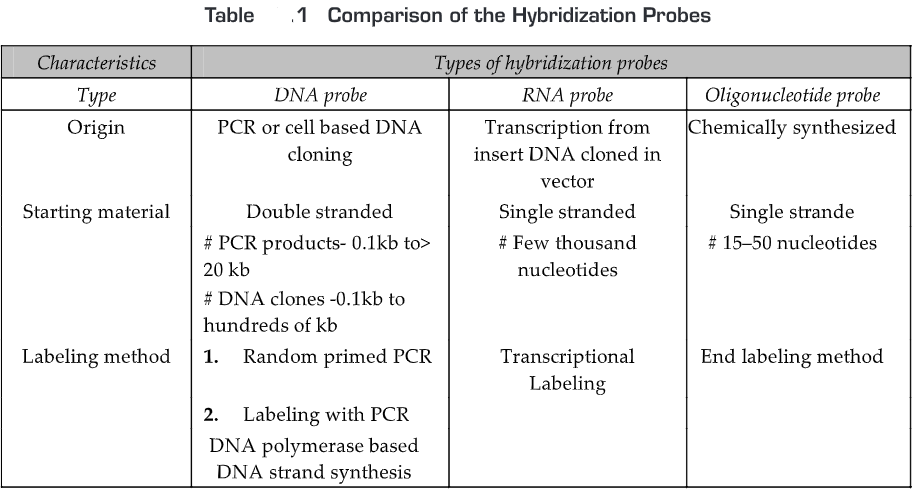 Hybridization probes can be labeled by two methods (Fig. 3)

By supplying labeled nucleotides to the cultured cells. 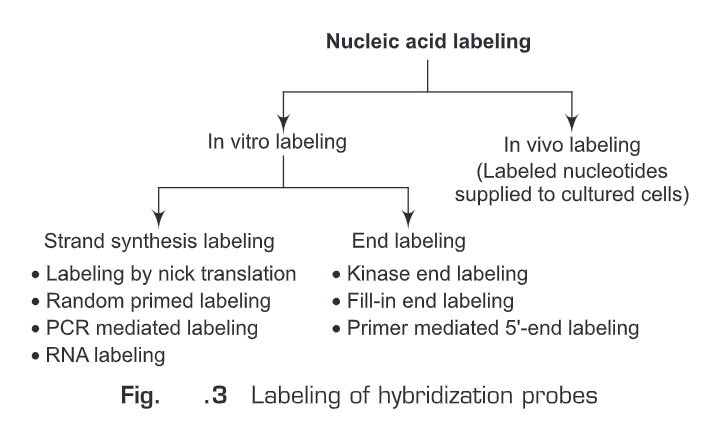 (i) Labeling by nick translation— Nick translation (Fig. 4) is a procedure for making a DNA probe in which a DNA fragment is treated with DNase to produce single-stranded nicks, followed by incorporation of labeled nucleotides from the nicked sites by DNA polymerase I. This process is called nick translation because the DNA to be processed is treated with DNase to produce single-stranded “nicks.” This is followed by replacement in nicked sites by DNA polymerase I, which elongates the 3′ hydroxyl terminus, removing nucleotides by 5′-3′ exonuclease activity, replacing them with labeled dNTPs. This nick is then sealed by DNA ligase. If the reaction is carried at 15°C (low temperature), the reaction will renew only one copy of the original nucleotide strand. The advantage of this method is that it allows the control of probe length which is important in situ hybridization applications. 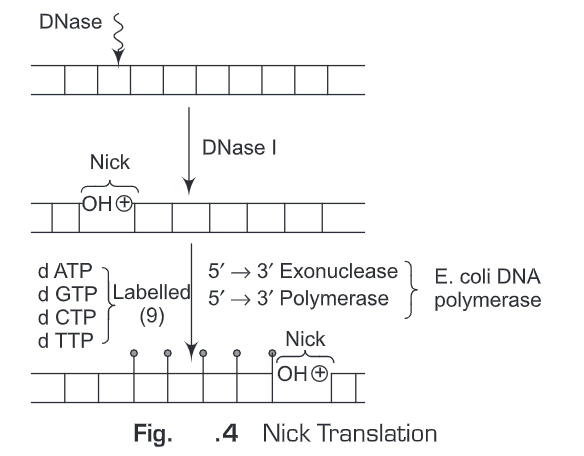 (ii) Random primed labeling —The method of “random primed” DNA labeling was introduced by Feinberg and Vogelstein in 1983. This method is based on the hybridization of oligonucleotides of all possible sequences to the denatured template DNA to be labeled. The complementary DNA strand is synthesized by a “Klenow” fragment of DNA Polymerase I, using the random oligonucleotides as primers. A labeled nucleotide is added in the reaction mixture. Therefore, the newly synthesized complementary DNA will be labeled. The reaction mixture will contain random oligonucleotides, a Klenow fragment of DNA Polymerase I, dATP, dGTP, dTTP. This rapid labeling is accomplished with the use of the Klenow fragment, which lacks 5′-3′ exonuclease activity, and by the use of hexamer/nonamer primers giving more efficient priming from the template at 37°C (Fig. 5). 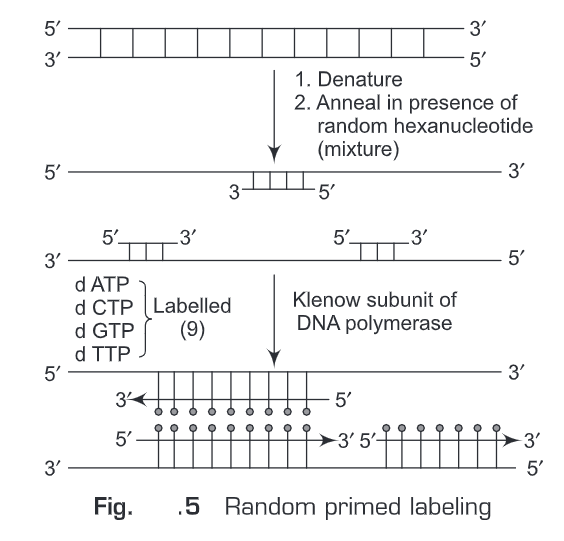 (iii) PCR mediated labeling— Amplification of DNA using the polymerase chain reaction (PCR) provides the opportunity to label the resulting product with either modified nucleotides or oligonucleotide primers. Therefore, we can incorporate either the labeled nucleotides in the reaction mixture or the labeled primers in the PCR reaction mixture which will result in the production of labeled PCR product throughout its length. PCR labeling produces a very high yield of labeled probe from very little template. The advantages of this method are:

Labeling of RNA is done in dark by:

(i) In vitro transcription from cloned DNA inserts—RNA probes are prepared by in vitro transcription (Fig. 6). The RNA probe is transcribed from a linear DNA template using bacteriophage DNA-dependent RNA polymerases from the Salmonella bacteriophage SP6, and the E. coli. bacteriophages T3 and T7 (RNA polymerase T7, T3 or SP6). We should have sufficient quantities of a plasmid carrying the gene sequence of interest that can be used as the template for RNA probe synthesis. Before a riboprobe can be transcribed, the correct RNA polymerase promoter sequences must be available in the plasmid in the correct orientation with respect to the template sequence. The transcription vectors pGEM (SP6 and T7 promoters) and pBluescript (T3 and T7 promoters) are commonly used. For in vitro transcription reactions the plasmid must also be in a linear form. We use restriction enzymes to linearize the plasmid. For example, the plasmid vector (pSP64) contains SP6 promoter sequence adjacent to multiple cloning sites (MCS). Then transcription is initiated from a specific start point in the promoter sequence transcribing the DNA sequence that has been inserted in the multiple cloning sites (MCS). Labeled sense and anti-sense riboprobes can be generated and are widely used in tissue in situ hybridization.

The advantages of this method are :

(ii) 3’-end labeling RNA – A short DNA template is designed to anneal to the 3’-end of the RNA, with a two nucleotide 5’ overhang of 3’-TA-5’, 3’-TG-5’ or 3’-TC-5’. The Klenow fragment of DNA polymerase I can then cleanly and efficiently extend the 3’-end of the RNA by the incorporation of a single a-32P-labeled dATP residue. This method can be used to label one RNA ina mixture of RNAs, or to label 5’-blocked RNAs such as mRNA.

Advantages of oligonucleotide probes are:

Oligonucleotides are small and diffuse readily into cells, making them ideal for in situ
hybridization applications

Methods used for labeling of oligonucleotides are :

(ii) Fill-in end labeling (Fig. 8)— Initially, the selected DNA is digested with such restriction endonucleases that after digestion 5’-overhangs are produced (e.g., EcoRI). These 5’-overhangs will act as primer and polymerase activity of Klenow fragment (of E.coli DNA polymerase I) is used to fill in the recessed ends. Any one of the nucleotides provided in the reaction mixture is labeled. Hence, we get labeled oligonucleotide at 3’-end. Another specific restriction endonuclease can be used to cleave internal site so as to get fragments of different sizes which can be size fractionated. The advantages of this method are: 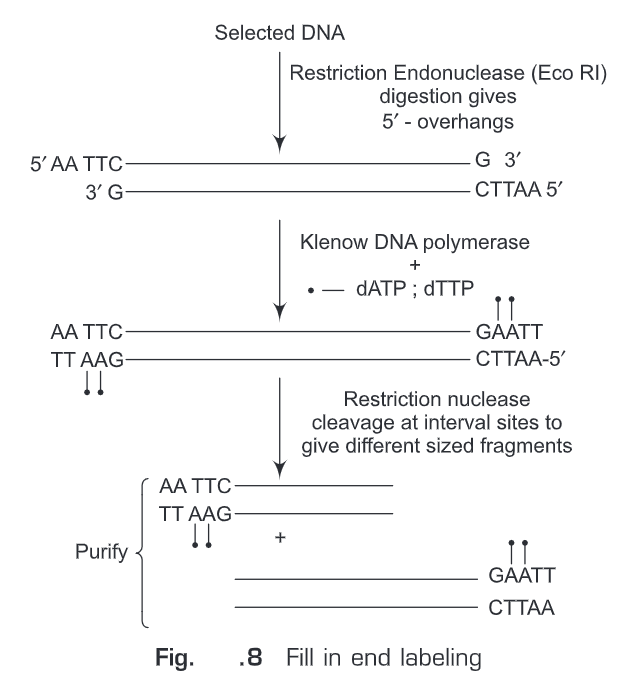